We have all heard of unicorns!

The unicorn is a legendary creature that has been described since antiquity as a beast with a single large, pointed, spiraling horn projecting from its forehead. The unicorn was depicted in ancient seals of the Indus Valley Civilization and was mentioned by the ancient Greeks in accounts of natural history by various writers, including Ctesias, Strabo, Pliny the Younger, Aelian and Cosmas Indicopleustes. The Bible also describes an animal, the re'em, which some versions translate as unicorn.

Interpretations of the unicorn myth focus on the medieval lore of beguiled lovers, whereas some religious writers interpret the unicorn and its death as the Passion of Christ. The myths refer to a beast with one horn that can only be tamed by a virgin; subsequently, some writers translated this into an allegory for Christ's relationship with the Virgin Mary. Unicorn (Wikipedia)

A little while ago, I was watching the Harry Potter’s movies and made note that within the series, there are some strange and mythological beasts portrayed in the books/movies.

In particular there is the hippogryph and the phenix.

Now the phenix is used in medieval imagery to symbolize the the resurrection.

The phoenix symbolized renewal in general, as well as entities and concepts such as the Sun, time, the Roman Empire, Christ, Mary, and virginity.

The phoenix myth is also part of early Christian traditions. Some scholars have speculated that these early phoenix legends may have their origins in the bennu of Egyptian mythology. In the 19th century, scholastic suspicions appeared to be confirmed by the discovery that Egyptians in Heliopolis had venerated the bennu. However, the Egyptian sources regarding the bennu are often problematic and open to a variety of interpretations. Some of these sources may have actually been influenced by Greek notions of the phoenix, rather than the other way around.

The Old English Exeter Book contains an anonymous 677-line 9th-century alliterative poem consisting of a paraphrase and abbreviation of Lactantius, followed by an explication of the Phoenix as an allegory for the resurrection of Christ. - Phoenix (mythology) 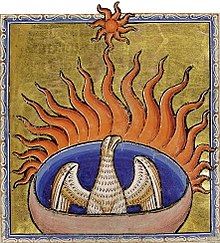 Detail from the 12th-century Aberdeen Bestiary, featuring a phoenix.

As for the hippogryph, it used as a symbol of Christ’s two nature.

In Ancient Greek folklore, the hippogriff, or sometimes spelled hippogryph, is a legendary creature which has the front half of an eagle and the hind half of a horse.

Thus my question is as follows: What other ancient mythological beasts (if any) have been used in Christian imagery to express Christian beliefs through symbolism?

The more obscure and ancient the better!

In mythology gargoyles were believed to frighten away evil spirits. They are often used to guard cathedrals or castles. Sometimes they are depicted as vessels for demonic possession. Of course, they also have a very practical architectural function:

In architecture, and specifically in Gothic architecture, a gargoyle is a carved or formed grotesque with a spout designed to convey water from a roof and away from the side of a building, thereby preventing rainwater from running down masonry walls and eroding the mortar between. When not constructed as a waterspout and only serving an ornamental or artistic function, the correct term for such a sculpture is a grotesque, chimera, or boss. There are also regional variations, such as the hunky punk. Just as with bosses and chimeras, gargoyles are said to protect what they guard, such as a church, from any evil or harmful spirits. Source: https://en.wikipedia.org/wiki/Gargoyle

There is an interesting French legend concerning St. Romanus, bishop of Rouen (died circa 640 A.D.) and a monster called Gargouille:

La Gargouille is said to have been the typical dragon with bat-like wings, a long neck, and the ability to breathe fire from its mouth. Multiple versions of the story are given, either that St. Romanus subdued the creature with a crucifix, or he captured the creature with the help of the only volunteer, a condemned man. In each, the monster is led back to Rouen and burned, but its head and neck would not burn due to being tempered by its own fire breath. The head was then mounted on the walls of the newly built church to scare off evil spirits, and used for protection. In commemoration of St. Romain, the Archbishops of Rouen were granted the right to set a prisoner free on the day that the reliquary of the saint was carried in procession. Source: https://en.wikipedia.org/wiki/Gargoyle#Legend_of_the_Gargouille

The dragon or Gargouille was recorded for the first time in 1394. The account described how, in the wild swamps on the left bank of the Seine a huge serpent or dragon rampaged, who "devoured and destroyed people and beasts of the field". Romanus decided to hunt in this area but could only find one man to help him, a man condemned to death who had nothing to lose. They arrived in the serpent's land and Romanus drew the sign of the cross on the beast. It then lay down at his feet and let Romanus put his stole on him as a leash, in which manner he led it into the town to be condemned to death and burned on the parvis of the cathedral (or thrown into the Seine according to other authors). This legend was the origin for the bishops' privilege (lasting until 1790) to pardon one prisoner condemned to death each year, by giving the pardoned man or woman the reliquary holding Romanus's relics in a procession. (Apology – I can’t find the Wiki link to this paragraph)

In the 12th century, before the use of gargoyles as rain spouts, St. Bernard of Clairvaux was famous for speaking out against gargoyles carved on the walls of his monastery's cloister:

What are these fantastic monsters doing in the cloisters before the eyes of the brothers as they read? What is the meaning of these unclean monkeys, these strange savage lions, and monsters? To what purpose are here placed these creatures, half beast, half man, or these spotted tigers? I see several bodies with one head and several heads with one body. Here is a quadruped with a serpent's head, there a fish with a quadruped's head, then again an animal half horse, half goat... Surely if we do not blush for such absurdities, we should at least regret what we have spent on them.

The ancient Egyptians, Greeks, Etruscans, and Romans all used animal-shaped waterspouts. During the 12th Century, when gargoyles appeared in Europe, the Roman Catholic Church was growing stronger and converting many new people. Most of the population at this time was illiterate, so images were very important to convey ideas. Many early gargoyles depicted some version of a dragon, especially in France. In addition to serving as spouts for water, the gaping mouths of these gargoyles evoked the fearsome destructiveness of these legendary beasts, reminding the laity of the need for the church's protection. Source: https://en.wikipedia.org/wiki/Gargoyle#Catholic_Church

The Wikipedia article about the Gargoyle has lots of fascinating images, but I don’t know how to copy and paste them. Fascinating subject!

Further research into the subject of mythical beasts used in Christian imagery to express Christian beliefs through symbolism led me to the various Papal Coats of Arms used over the centuries. I observed that dragons, eagles and lions featured on many of them, and then I spotted one that had to be mythical. It was a winged lion with the face of a man. Here is a link to the image and to the background of the Lion of St. Mark: https://en.wikipedia.org/wiki/Lion_of_Saint_Mark#/media/File:Leone_di_san_Marco.png

The Lion of Saint Mark, representing Mark the Evangelist, pictured in the form of a winged lion holding a Bible, is the symbol of the city of Venice and formerly of the Venetian Republic. It is also found in the symbol of the Greek Orthodox Patriarchate of Alexandria. It appears in both merchant and military naval flags of the Italian Republic.

The representation as a lion is derived from Mark’s description of John the Baptist as "...The voice of the one who cries in the wilderness: Prepare Ye the way of the Lord, make straight his paths", which artists compared to a roaring lion... Venetian tradition states that when Mark was traveling through Europe, he arrived at a lagoon in Venice, whereby an angel appeared to him and said "Peace be with thee, O Mark, my evangelist. Here thy body will rest." This tradition was used as justification by Rustico da Torcello and Bon da Malamocco in 828 for stealing the remains of Mark from his grave in Alexandria, and moving them to Venice, where they were eventually interred in the Basilica of St. Mark.

The coats of arms of Popes Pius X, John XXIII, and John Paul I contain the Lion of St. Mark in recognition of their previous positions as Patriarchs of Venice. Source: https://en.wikipedia.org/wiki/Lion_of_Saint_Mark

The article said that the wings come from Ezekiel 1:10 and the application of the prophet's vision of four winged creatures to the evangelists. These appear again in Revelation 4:7. However, when you read the descriptions from the Bible, it becomes clear that the Lion of Saint Mark embraces only part of the biblical creatures:

Ezekiel chapter 1 describes the vision of what looked like four living creatures. “In appearance their form was that of a man, but each of them had four faces and four wings... Their faces looked like this: Each of the four had the face of a man, and on the right side each had the face of a lion, and on the left the face of an ox; each also had the face of an eagle. Such were their faces. Their wings were spread out upwards; each had two wings, one touching the wing of another creature on either side, and two wings covering its body.” NOTE: These “four living creatures” are called cherubim in chapter 10.

Symbolism: Man – God’s ordained ruler of creation; Lion – the strongest of the wild beasts; Ox – the most powerful of the domesticated animals; Eagle – the mightiest of the birds. (NIV Study Bible)

Ezekiel, in a vision, also saw four living creatures, each of which had four faces – human in front, lion on the right, ox on the left, and eagle behind. In John’s vision the creatures were in the form of a lion, an ox, and a flying eagle, and one had a face like that of a man. (NIV Study Bible notes)

The Lion of Saint Mark depicts a lion with the face of a man and with two wings. It is not a real beast, but is the depiction of a creature with elements taken from Ezekiel and Revelation and no doubt has significant symbolism for the Catholic Church.

Not the answer you're looking for? Browse other questions tagged history tradition symbolism beast mythology or ask your own question.

8
John Wesley's influence by ancient fathers
5
How diverse or united is Christian history on the imagery of “Father” and “Son”?
6
What was the Christian response to death-loving practices of Ancient Roman society?
6
Why are the same palms used on Palm Sunday used for Ash Wednesday services the next year?
6
Why is the fish often used as a symbol of Christ?
7
How widely used is “beehive” imagery?
12
The unicorn as a Christological figure
2
What's the first ancient document composed by a non-Christian denying the resurrection?
3
Do the ancient churches built by the Portuguese have a statue of mermaid on the façade?