Are there any known Eastern Catholics who have received the stigmata?

Just curious. I wonder whether there are any Eastern Catholics to whom God gave the grace of receiving the wounds of Christ (stigmata) or did only Latin Rite Catholics ever receive them? I know of Croatian priest Zlatko Sudac, but I think he's a Latin Rite Catholic too.

Are there any known Eastern Catholics who have received the stigmata?

There is at least one.

Saint Mariam Baouardy, known a in religion as Mary of Jesus Crucified. She is affectionately called by many as the Little Arab.

Mariam Baouardy was born on 5 January 1846 in Ibillin, a small village of Galilee, between Nazareth and Haifa, in a Greek-Melkite Catholic family. Before Mariam’s birth, her parents had seen twelve children die in infancy. In their deep sadness and confident in God, they had decided to make a pilgrimage to Bethlehem to pray at the manger and to ask for the grace of a daughter. Finally Mariam was born and one year later her brother Boulos arrived.

In 1865 she was in Marseille where she met the sisters of St Joseph of the Apparition. Although she was 19 years old, she looked only 12 or 13; she spoke very bad French and her health was also bad. But she was accepted into the noviciate and was very happy that she could finally give herself fully to the Lord. Always working hard, she spent most of her time in the kitchen or the laundry. But she relived every week the Passion of Jesus. She received the stigmata (but she was so simple that she believed it was an illness), and all kinds of extraordinary graces began to appear. Some sisters were quite disconcerted, and at the end of the two years of noviciate she was not admitted into the congregation. Eventually, she found her way to the Carmel of Pau, in south western France.

Mariam joined the Carmel of Pau in June 1867 and here she always found the love and understanding to sustain her in her sufferings. As a novice, she received the name of Sister Mary of Jesus Crucified. She asked to become a lay sister, because she wanted to serve others and also she had difficulties in reading the Divine Office. - St. Mary of Jesus Crucified

Although St. Mary of Jesus Crucified was of the Greek Melkite Catholic Rite, she made profession in the Carmelite Order within the Latin Rite because this Order did not exist within her Rite of origin. Nevertheless, she remained of Greek Melkite Rite all her life. Although she received the sacraments for the most part from priests of the Roman Rite, she never disowned her Eastern Catholic heritage and remained as such all her life.

An ecstasy and the first appearance of the stigmata

Her fellow sisters were always amused by her broken French, but they were most impressed by her remarkable virtues and piety. Fortuneately for Mariam, two women of great virtue were directing the Capelette at that time, the Superior General, Mother Emily Julien, and Mistress of novices, Mother Honorine Piques. They were excellent spiritual guides for Mariam and to their surprise they soon began to notice some strange phenomena in little Arab. The ecstasies of the church of St. Nicholas were multiplied, with some disturbing peculiarities. Thus it happened that in January 1866 - the postulant was twenty years of age - Mother Honorine came upon Mariam in the dormitory, prostrate, with her face to the floor and her left hand covered with blood. From Wednesday evening to Friday morning each week, to the ecstasies there soon was added another remarkable phenomenon, the stigmata.

The stigmata of the heart was the first to be manifested. She was twenty years of age, and it happened in August, 1866 at Marseille. She was praying in the chapel one evening, when, in the tabernacle she saw Jesus, who appeared to her with His five wounds and the crown of thorns. It seemed to her she saw coals of wrath in His hands. She heard Jesus say to His Mother prostrate at His feet: "Oh, how My Father is offended!" The little postulant then sprang toward Jesus, she put her hand on the wound of His Heart, exclaiming: "My God, give me, please, all these sufferings, but have mercy on sinners." Coming out of the ecstasy, she saw her hand covered with blood, and she experienced a severe pain in her left side: the latter would bleed every Friday.

On March 27, 1867, the other stigmata appeared. The privileged one of the Crucified confided to the mistress of novices: "It seemed to me that I was gathering roses to decorate Mary´s altar: these roses appeared to have thorns on both sides, and the thorns were thrust in my hands and into my feet. When I came to myself, my mouth was very bitter, my feet and hands swollen: in the middle of my hands and on my feet there were black bumps." The following day, Thursday, the sufferings continued to increase until Friday. It was the Feast of the five wounds of Christ. In the morning, about ten o'clock, the black scabs fell off, the crown of thorns appeared on her forehead, blood flowed from her head and feet. The prodigy was renewed during the months of April and the first two weeks of May. It ceased upon an order of the mistress of novices. This latter, in order to put an end to the rumors that were circulating in the community, asked the postulant to obtain from God that nothing would appear exteriorly. To the great joy of the stigmatist, the wounds closed and healed up.

Faced with such facts, Mother Honorine acted with as much prudence as understanding in regards to both the ecstasies and also the stigmata. Obedience being, in such cases, the litmus test of the Church, she thus forbade Mariam to have ecstasies during the day and in the presence of the religious. Even during the night she was not to get up, and she was not to attract attention. Mariam obeyed, and God, Whom loves obedience, seconded and approved of her actions . The Mistress of novices, seeing that she was dealing with a person extraordinarily fashioned by the Holy Spirit, asked the child to relate for her what she remembered of her childhood and adolescence. Everything was put in writing. One copy would later be sent to the Carmel of Pau with this note of Mother Honorine, "I am sending you copy of what I myself have gathered together from what she related to me, not without much resistance, but complying solely through obedience. She asked of me the greatest secrecy which I have guarded until this day... I have omitted everything I did not entirely understand, because of the difficulty this dear child experienced in explaining herself in French."

Mother Honorine fell ill, and was replaced in the novitiate by Mother Veronica. This religious was to hold a large place in the life and heart of Mariam. She was English and a convert from Anglicanism. After seventeen years of religious life with the Sisters of St. Joseph, she was later to enter the Carmel of Pau with Mariam, and it was in her arms that “the little Arab” would die, at the Carmel of Bethlehem. Mariam, had foretold that, contrary to all expectations, Sister Veronica would become mistress of novices at the Capelette. She held this office for one month, until the reception of the Indult permitting her to enter Carmel. And it was at Mother Veronica’s wish that Mariam`s stigmata disappeared at Marseille, and in accordance with Mariam’s prophecy at that time, the stigmata would not reappear until the following Lent, at Pau. - Saint Mariam Baouardy (St. Mariam of Jesus Crucified) -The Lily of Palestine

The cause of canonization started on 18 May 1927 and would culminate with the decree of heroic virtue on 27 November 1981. Baouardy was beatified by Pope John Paul II on 13 November 1983 and was canonized on 17 May 2015 by Pope Francis. She became the second Greek Catholic to be canonized a saint of the Catholic Church. Her feast day is August 26 and she is the parron saint of peace in the Holy Land. 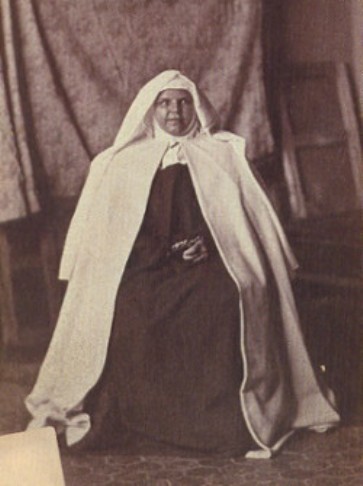 Not the answer you're looking for? Browse other questions tagged catholicism eastern-catholicism stigmata or ask your own question.

10
Old Roman Catholic Bibles having indulgence charts?
4
Is the Roman Catholic understanding of forgiveness different from the Protestant understanding?
4
Can a Roman Catholic be re-catechized and re-confirmed?
8
Is it possible for an Eastern Rite Catholic to change over to the Roman Rite and become ordained as Latin Rite priest?
0
According to Catholic exorcists, does the Devil hate Catholic Church prayers said in Latin?
6
How do I know when to cross myself during Mass (Novus Ordo)?
3
Contemporary Catholic views on music in the Church: is music for God or for the people?
2
Does Catholic Church acknowledge St. Paul the Apostle as consecrated Bishop during Apostolic times?
2
Is it only Roman Catholicism that teaches the possibility of universal vulnerability of demon possession?