Hagia Sophia was originally the seat of the Patriarch of Constantinople, then the chief mosque of the Ottoman Empire, then a museum. A few days ago, it reverted to being a mosque once more. Numerous Christian religious leaders have decried this last transition (as, in my opinion, they ought to), but it left me wondering what a long-term resolution of the matter would actually look like.

The building could, in principle, revert to being a church. Personally, I feel that, given the centuries of history that Muslims have with said structure, this would be unjust; and, in any case, short of a Christian reconquest of Constantinople/Istanbul, it's never going to happen. Atatürk's compromise of turning the building into a museum seems well-intentioned but ultimately unsatisfactory: this building was built for the glory of God.

The one remaining option that I can see is to share the building. Christianity's and Islam's holy days seldom overlap. Could the building be a church on Sundays and a mosque on Fridays? I'm a practising Roman Catholic myself, and I can't think of any insurmountable reason forbidding sharing a place of worship outright. There are, after all, stories of Catholic priests celebrating the eucharist in Auschwitz; I can't imagine that any putative unholiness brought on by reciting the Quran could compete with an extermination camp. But I'm far from an expert, and I hardly need to add that the Eastern Orthodox perspective would be essential in the case of Hagia Sophia.

And, of course, Hagia Sophia is just a prominent example. There are plenty of other locations, e.g. the Mosque–Cathedral of Córdoba, where it might be reasonable for Christians to share a place of worship with another faith.

According to current Catholic Canon Law, sharing a space in the manner proposed would pose problems.

Canon 1205: "Sacred places are those which are designated for divine worship or for the burial of the faithful by a dedication or a blessing which the liturgical books prescribe for this purpose." Canon 1210: Only those things which serve the exercise or promotion of worship, piety, or religion are permitted in a sacred place; anything not consonant with the holiness of the place is forbidden. In an individual case, however, the ordinary can permit other uses which are not contrary to the holiness of the place.

While it might be justifiable for a non-Catholic Christian group to use a Catholic space in accord with their customs as long as in the church "cleanliness and beauty are preserved as befit a house of God and that whatever is inappropriate to the holiness of the place is excluded." Canon 1220, that would be much harder to support for a religion entirely distinct and theologically at odds with Catholicism.

The comparison to Auschwitz is unsuitable. One case is making due with the best which is possible given the circumstances (i.e. the alternative would be not having Mass at all) and the other would be an ongoing situation. Canon Law, like civil/common law has a general, but not absolute law principle along the lines of necessity not obligating strictly (or you are not bound to the impossible).

According to Catholicism, it theoretically seems to be possible, but only as an emergency situation, if it is not a consecrated church or cathedral. Please remember that Catholic churches and cathedrals are consecrated to the service of God and all danger of of a sacrilege and scandal must absolutely be avoided. Churches in France, were used as military hospitals during World War I, but the Blessed Sacrament was removed from the churches in question.

As far as Catholicism, goes there seems so be very little written on this subject, but Canon Law seems to forbid it. Muslims are not Christians and their acts of worship in a Catholic place of worship would constitute a profane act in itself. It would be very close to an act of desecration, seeing that such sacred places house the Blessed Sacrament.

The late Pope St. John Paul II gave a Catholic church to one of the Orthodox Churches in Rome for their own usage when they could not acquire one for themselves. But then the Orthodox churches have the faith in the same seven sacraments of Catholics.

One thing to keep in mind is that Muslims are not Christians and historically much bloodshed has been spilt by both sides. Sharing a ”building” may in modern times may be permitted, due to some extenuating circumstances, but in no way should this be a permanent situation for fear that tensions may build up nor should the building be a consecrated church. A rented hall could be a viable solution, but not a sacred space of worship such as a church.

As far as the Catholic Church is concerned, Muslims worshipping in a sacred space such as a church would be an act of profane usage and is forbidden.

Here is what Canon Law has to say about Sacred Places:

1205 Sacred places are those which are designated for divine worship or for the burial of the faithful by a dedication or a blessing which the liturgical books prescribe for this purpose.

1220 §1. All those responsible are to take care that in churches such cleanliness and beauty are preserved as befit a house of God and that whatever is inappropriate to the holiness of the place is excluded.

1222 §1. If a church cannot be used in any way for divine worship and there is no possibility of repairing it, the diocesan bishop can relegate it to profane but not sordid use.

§2. Where other grave causes suggest that a church no longer be used for divine worship, the diocesan bishop, after having heard the presbyteral council, can relegate it to profane but not sordid use, with the consent of those who legitimately claim rights for themselves in the church and provided that the good of souls suffers no detriment thereby.

Catholics and Orthodox may not allow this in their churches, but the Lutherans seem to be a home with the idea.

In fact, a Lutheran Church in Berlin has opened its’ doors to Muslims due to the Covid-19 we are presently experiencing.

A church in Berlin has opened its doors to Muslim worshippers unable to fit into their mosque under new social distancing rules.

Germany allowed religious services to resume on 4 May but worshippers must maintain a distance of 1.5m (5ft).

As a result the Dar Assalam mosque in the city's Neukölln district could only hold a fraction of its congregation.

But the Martha Lutheran church in Kreuzberg offered to help by hosting Friday prayers at the end of Ramadan.

Throughout the month of Ramadan, Muslims abstain from eating, drinking, smoking and sex from dawn to dusk. Normally families and friends would gather to break their fast and attend communal prayers, but in Berlin - as in countries across the world - this year's celebrations have been affected. 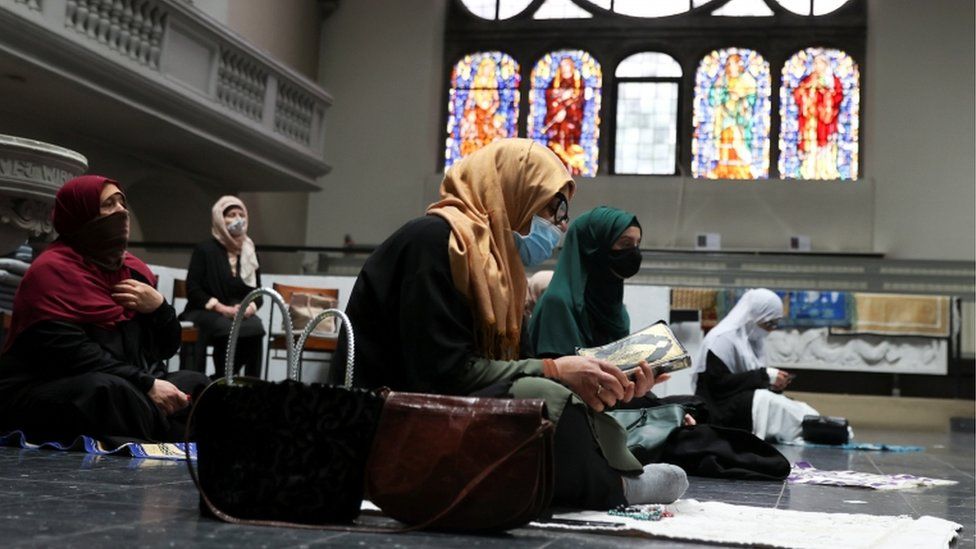 Not the answer you're looking for? Browse other questions tagged catholicism eastern-orthodox islam inter-faith or ask your own question.

3
Does Eastern Orthodoxy teach that there are other Apostles?
5
Are there any ecumenical movements among lay people working to unite Roman Catholics and Orthodox Christians?
3
In Catholicism, Eastern Orthodoxy, and Lutheranism, what are the main explanations on the matter of why Jesus Christ needed to be baptized?
3
Which, if any, of the seven Church Councils viewed as “Ecumenical” by Eastern Orthodox Christians are rejected by the Roman Catholic Church?
5
What is achieved by baptism in Eastern Orthodoxy (compared with Catholicism)
1
Are there any Catholic Audiobook sharing websites like Librivox?
4
Does there exist within the Catholic Church a church, cathedral or even an altar dedicated to the Holy Spirit?
0
According to Catholicism, how many heavens are there?
2
Are there any known Eastern Catholics who have received the stigmata?