Is there any biblical basis for the Church to depict Jesus as a European or some other ethnic race?

The reason I ask is that the Most Rev Justin Welby, Archbishop of Canterbury (Anglican Church of England) was recently interviewed on BBC Radio 4’s ‘Today’ programme and said that in the wake of Black Lives Matter protests, the way the Western church portrays Jesus needs to be thought about again. He suggested that a Middle Eastern looking Jesus is the most accurate.

The Daily Telegraph (Saturday 27 June 2020) reported that a spokesman for Westminster Abbey said: “The Dean and Chapter of Westminster have begun a conversation about the Abbey’s memorials and how we can better reflect the attitudes of our time.”

For Jesus to be accepted by the society into which he was born, he would have looked like them. The Jewish community in which Jesus grew up did not doubt that Jesus was the son of Joseph, the carpenter:

"Isn’t this the carpenter’s son? Isn’t his mother’s name Mary, and aren’t his brothers James, Joseph, Simon and Judas? Aren’t all his sisters with us?” (Matthew 13:55)

Had Jesus been born with white skin, blond or light brown hair and blue eyes, eyebrows might have been raised!

Is there any biblical basis for the Western Church (Catholic or Protestant) to depict Jesus as a European or some other ethnic race?

Is there any biblical basis for Churches in the West (Catholic, Orthodox, Anglican or Protestant) to depict Jesus as European or some other ethnic race?

It seems to a certain point that men tend to maintain different depictions of Jesus, sometimes reflecting local racial characteristics, as do the Catholic and Orthodox depictions. As to whether there is any Scriptural references for depicting Jesus as a European is doubtful. There could be an indirect passage in Scriptures for maintaining he was of dark complexion (black) [I am black but beautiful, O ye daughters of Jerusalem, as the tents of Cedar, as the curtains of Solomon. (Song of Solomon 1:4)], but I will get to that further on.

Certain local traditions have maintained different depictions, sometimes reflecting local racial characteristics, as do the Catholic and Orthodox depictions. The Coptic Church of Egypt separated in the 5th century, and has a distinctive depiction of Jesus, consistent with Coptic art. The Ethiopian Church, also Coptic, developed on Coptic traditions, but shows Jesus and all Biblical figures with the Ethiopian appearance of its members. Other traditions in Asia and elsewhere also show the race of Jesus as that of the local population (see Chinese picture in the gallery below). In modern times such variation has become more common, but images following the traditional depiction in both physical appearance and clothing are still dominant, perhaps surprisingly so. In Europe, local ethnic tendencies in depictions of Jesus can be seen, for example in Spanish, German, or Early Netherlandish painting, but almost always surrounding figures are still more strongly characterised. For example, the Virgin Mary, after the vision reported by Bridget of Sweden, was often shown with blonde hair, but Christ's is very rarely paler than a light brown.

An 18th-century Ethiopian image of Jesus

Images of Jesus tend to show ethnic characteristics similar to those of the culture in which the image has been created. Beliefs that certain images are historically authentic, or have acquired an authoritative status from Church tradition, remain powerful among some of the faithful, in Eastern Orthodoxy, Anglicanism, and Roman Catholicism. The Shroud of Turin is now the best-known example, though the Image of Edessa and the Veil of Veronica were better known in medieval times. - Depiction of Jesus

As I have already mentioned, there is not direct biblical basis for the West to depict Jesus as being European in their art. It is both a cultural sentimentality and a local tradition. 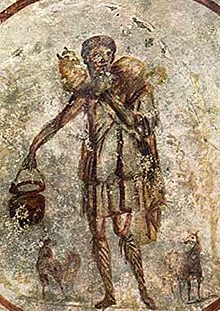 Jesus without a beard in the Catacombs of Rome. Third-century fresco from the Catacomb of Callixtus of Christ as the Good Shepherd. 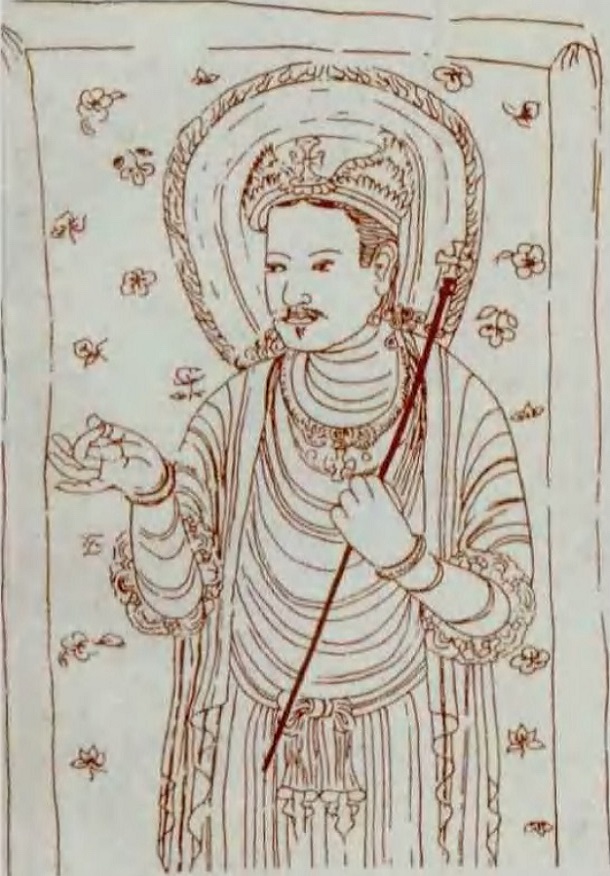 Depicting Jesus and Mary as being Caucasian in European communities is by far not a universal tradition. Although not based on biblical proofs, it does remain a solid tradition in the West.

In fact, the term Black Madonna or Black Virgin tends to refer to statues or paintings in Western Christendom of the Blessed Virgin Mary and the Infant Jesus, where both figures are depicted as black.

The term Black Madonna or Black Virgin tends to refer to statues or paintings in Western Christendom of the Blessed Virgin Mary and the Infant Jesus, where both figures are depicted as black. The Black Madonna can be found both in Catholic and Orthodox countries.

The paintings are usually icons which are Byzantine in origin or style, some made in 13th- or 14th-century Italy, others are older and from the Middle East, Caucasus or Africa, mainly Egypt and Ethiopia. Statues are often made of wood but occasionally made of stone, painted and up to 75 cm (30 in) tall. They fall into two main groups: free-standing upright figures or seated figures on a throne. There are about 400–500 Black Madonnas in Europe, depending on how they are classified. There are at least 180 Vierges Noires in Southern France alone, and there are hundreds of non-medieval copies as well. Some are in museums, but most are in churches or shrines and are venerated by believers. Some are associated with miracles and attract substantial numbers of pilgrims.

Black Madonnas come in different forms, and the speculations (mostly by white scholars) behind the reason for the dark hue of each individual icon or statue vary greatly and are not without controversy. Though some Madonnas were originally black or brown when they were made, others have simply turned darker due to factors like ageing or candle smoke. The Jung scholar, Ean Begg, has conducted a study into the potential pagan origins of the cult of the black madonna and child. Another speculated cause for the dark-skinned depiction is due to pre-Christian deities being re-envisioned as the Madonna and child.

Research into the Black Madonna phenomenon is limited due to a wide consensus among (white) scholars that the dark-skinned aspect was unintentional. Begg has a different view: he links the recurring refrain from the Song of Solomon, ‘I am black, but I am beautiful’ to the Queen of Sheba. Recently, however, interest in this subject has gathered more momentum.

Important early studies of dark-skinned holy images in France were by Camille Flammarion (1888), Marie Durand-Lefebvre (1937), Emile Saillens (1945), and Jacques Huynen (1972). The first notable study of the origin and meaning of the Black Madonnas in English appears to have been presented by Leonard Moss at a meeting of the American Association for the Advancement of Science on December 28, 1952. Moss broke the images into three categories: (1) dark brown or black Madonnas with physiognomy and skin pigmentation matching that of the indigenous population; (2) various art forms that have turned black as a result of certain physical factors such as deterioration of lead-based pigments, accumulated smoke from the use of votive candles, and accumulation of grime over the ages, and (3) residual category with no ready explanation. -Black Madonna (Wikipedia)

Moreover Mary has been associated with the Old Testament text from the Song of Songs which reads:

I am black, but beautiful.

These lyrics were commonly sung as a short refrain (called an ‘antiphon‘) in the feasts of the Virgin. But despite the association of the Mary with the ‘nigra sed formosa’ woman of the Song of Songs in Liturgy, I do not know of any depiction of the Virgin Mary as dark skinned in stained glass, or, for that matter, in any manuscript illuminations, wall paintings or embroidery.

In only two media in medieval art does the Virgin appear, at least on the face of it, to have been depicted with dark skin: wooden statues common in Western Europe, especially in France from the twelfth century onwards, and later, icon-like paintings to the east. 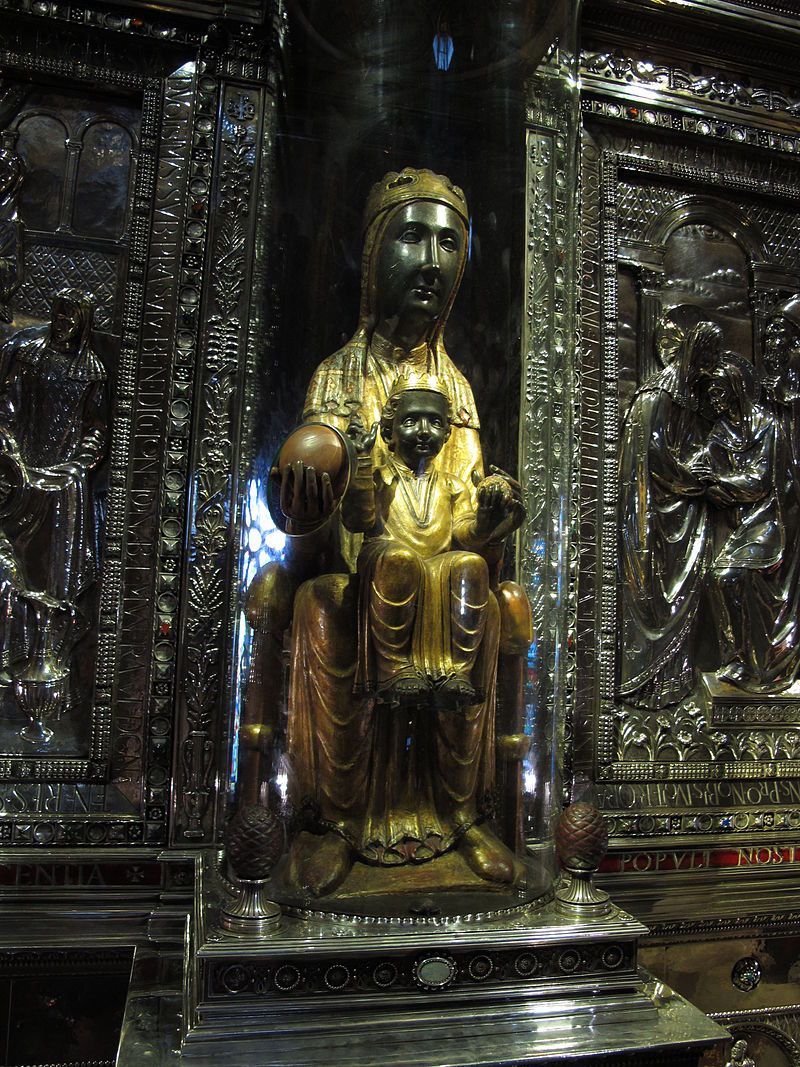 It is clear that over the course of the Middle Ages, there was a developing tradition of depicting blackness in medieval European art. But why, if the Virgin Mary was associated with the ‘nigra sum sed formosa’ text, did medieval artists not depict her as a sub-Saharan African woman? Was it because dark-skinned people were unknown to the artists? - The Virgin Mary: Beautiful and Black?

My considered answer to the question of depicting Jesus as European is 'No' . .

. . . because there is no biblical reason to depict Jesus at all.

If people persist in depicting Jesus of Nazareth and then (also) depicting him as non-Jewish and non-Middle Eastern, they give the impression that they are guilty of anti-semiticism and racism, denying a person (Jesus of Nazareth) of his true ethnic origin and his true cultural background.

Strong exception has been expressed by an activist who suggests that certain statues should be torn down and certain stained glass windows should be demolished, immediately

(as to the flesh) henceforth know we him no longer (in that fashion). [KJV]

Here, Paul makes it clear that Jesus Christ, the Son of God, risen from the dead and ascended into heaven is not known after the flesh.

He is known in Spirit.

But he that is joined unto the Lord is one spirit [1 Corinthians 6:17 KJV]

If we look at the demographics of the period of the rise of Christianity from the Constantine era (4th century) to shortly before the global exploration period (early 15th century), we can safely say that the majority of Christians are Europeans living in Western Europe, Byzantine empire, and Russia. Therefore, Jesus's portrayal in European art made sense. If Jesus is still depicted as European in Western countries I would think it's the momentum of artistic convention more than anything else.

Since the Bible was written in the apostolic period (before AD 100), of course there is no Biblical teaching about it other than the prohibition of making images of God (2nd commandment) which for one historical period caused the Iconoclasm conflict in the 8th and 9th centuries AD. But since this question is about Jesus's portrayal in general, not as an icon, I would think it is fine as long as the image itself is not worshiped. After all, God decided to provide us with His visible manifestation by becoming fully 100% human incarnate.

Now that the growth of Christianity and evangelism has shifted to the 10/40 window I think it is a lot better to portray Jesus as a typical Jew living in Palestine around 30 AD, in the best approximation of His original incarnation, like what the movie The Passion of the Christ did. This gives the message that Christianity grew out of early Judaism and that Jesus was a concrete flesh-and-blood 1st century Jew as well as Christ who died for the world.

At the same time, the gospel is: Christ died FOR ME (Martin Luther really emphasized the "for me"). Especially if the gospel presentation has a native language component (through movies, books, art), then the art could also convey Jesus for Korean, Jesus for Chinese, Jesus for Nigerian, Jesus for African American, etc. Good example is the 1879 painting of Jesus and the rich man by a Chinese artist.

Not the answer you're looking for? Browse other questions tagged biblical-basis christology tradition art or ask your own question.

23
What is the biblical basis for the Immaculate Conception?