Why did the Bishop of Rome accept (and retains until today) the title "Pontifex Maximus" and how were the rights and duties transferred/transformed?

According to the annual yearbook of the Catholic Church, the Bishop of Rome holds many other titles:

Vicar of Jesus Christ, Successor of the Prince of the Apostles, Supreme Pontiff of the Universal Church, Patriarch of the West, Primate of Italy, Metropolitan Archbishop of the Province of Rome, Sovereign of the State of Vatican City, Servant of the Servants of God.

The title Supreme Pontiff originated from a title usually held by the Roman Emperor, pontifex maximus (chief priest), whose main duty was to maintain the pax deorum (peace of the gods) by regulating expiatory sacrifices (to pagan gods) as well as administering the divine law (see wikipedia).

The first few Roman emperors who were Christian starting with Emperor Constantine still held this title, converting the title by imperial law (not church law) to make them the Head of the Church (giving Constantine the authority call the Council of Nicaea in 325 AD to settle the Arian controversy!), until Emperor Gratian gave the title to Pope Damasus I. (Source: The Title Pontifex Maximus).

Since it was a title having to do with official state religion, what was the reason that Pope Damasus accepted (and the subsequent bishops of Rome retained) the title "Pontifex Maximus" and how were the rights & duties transferred / transformed? Related subquestions (to help form the answer only):

Accepted answer should address the bold question at the minimum.

It is worth to describe in some detail that the title "Pontifex" pre-dates Christianity. According to Livius, the title was originally for (elected) high priests of the Roman religion, as mentioned in the Lex Ogulnia (300/299 BCE). The pontifex maximus was 'the greatest' or chairman of the college of the pontifices, 'priests'. They were responsible for the Roman state cult as a whole and for several cults in particular, namely the cults that had no priestly college of their own (such as the augures, the decemviri sacris faciundis and the fetiales).

In the period relevant to early Christianity, Julius Caesar was elected pontifex maximus in 63 BCE and kept the office until his death. After his death, Marcus Aemilius Lepidus became pontifex maximus (44-12 BCE); when he died, the emperor Augustus became responsible for the state cult. He also put an end to the election of the pontifices. From then on, a position in the college of pontifices was a sign of special imperial favor, comparable to a decoration in our age.

The word pontifex is sometimes explained as 'bridge builder', but is in fact related to the Etruscan word pont, 'road', and means something like 'preparer of the road'.

It should also be noted that Roman Emperors continued to bear the title Pontifex Maximus well beyond the time of establishment of the papal hierarchy (as in: the ultimate religious power of Rome was still with the emperor, not the pope). In fact, it was carried by all subsequent emperors until emperor Gratianus declined the title in 381. So the pope bearing the title pontifex maximus was not part of early Christianity. Only after Gratianus' refusal of the title was it attributed to the pope (note that this is half a century after Christinanity became a state religion of Rome under Constantine in 313). Constantine himself actually held the title. It is frequently stated that Constantine made Christianity the only permitted religion in the empire: this is not the case, and it is also very likely the reason why Constantine did not relinquish the title to then pope Sylvester.

As to why the popes attributed themselves this title in stead of "vicar of Christ", the most obvious worldly explanation is that the title had been attributed with the highest worldly + religious title in the empire for more than 600 years.

As to what significance & privileges the title holds in today's world, I would say very little. But in the days of the empire, the Pontifex Maximus enjoyed many privileges, such as addressing the Roman Senate at will, the supervision of religious funds (of Rome, not the Vatican), authority over all public and private religious institutions, instruction of the populace in the celestial and funerary rites including appeasing the dead, and expiation of prodigies. He who held the title had political as well as religious power in Rome.

As for when did the title become "Supreme Pontiff of the Universal Church", the word Catholic is derived via Late Latin catholicus, from the Greek adjective καθολικός (katholikos), meaning "universal".

Why did the Bishop of Rome accept (and retains until today) the title “Pontifex Maximus” and how were the rights and duties transferred/transformed?

Your source states that the Emperor Gratian gave up the title of Pontifex Maximus in 382 AD and then transferred it to Pope Damasus I.

Indeed, it was not until the Empire split in two, with the Western Empire going to the pious, youthful Emperor Gratian (c. 360 AD) that the Pope was given the title Pontifex Maximus. Indeed, feeling that it was not right for he himself to carry that title (since he was, after all, not a Christian priest) the pious young Emperor bestowed it upon Pope Damasus I, who became the first Pope in history to hold the title "Pontifex Maximus." - The Title Pontifex Maximus

I feel Mark Bonocore did not explain the history of the title pontifex maximus (greatest priest) all that clearly. In 382, the Emperor Gratian, at the urging of Ambrose, removed the Altar of Victory from the Forum, withdrew the state subsidies that funded many pagan activities and formally renounced the title of Pontifex Maximus. I am not convinced that he bestowed it on Pope Damascus I. He has no source whatsoever to substantiate such a claim. A claim that I can not verify in any historical texts as yet!

Thus there is in effect, no true acceptance, rights or duties attached to such a title, since it was not transferred to Pope Damascus I. At least not in the sense that the Roman Pontiff now carries this title. It is a honorific title of Popes. As such Canon Law plays no part in this traditional title carried by the Bishop of Rome.

It was not until the 15th century that popes started using the title Pontifex Maximus more regularly.

Catholic Church use of the title

In the 15th century, when the Renaissance stirred up new interest in ancient Rome, pontifex maximus became a regular title of honour for Popes. After the Fall of the Eastern Roman Empire with the Fall of Constantinople to the Ottoman Empire and the death of the final Roman emperor Constantine XI in 1453, pontifex maximus became part of the papacy's official titulature of the Bishop of Rome. The name given to the book containing the liturgical rites to be performed by any bishop, the Roman Pontifical, and to the form of liturgy known as Pontifical High Mass witness to the continued use of pontifex to refer to bishops in general.

While the title pontifex maximus has for some centuries been used in inscriptions referring to the Popes, it has never been included in the official list of papal titles published in the Annuario Pontificio. The official list of titles of the Pope given in the Annuario Pontificio includes "Supreme Pontiff of the whole Church" (in Latin, Summus Pontifex Ecclesiae Universalis) as the fourth title, the first being "Bishop of Rome". The title pontifex maximus appears in inscriptions on buildings and on coins and medallions. 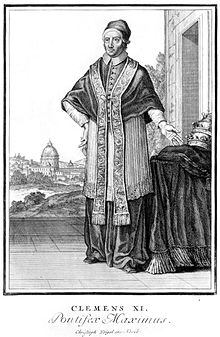 Engraving by Christoph Weigel the Elder of Pope Clement XI, giving him the title pontifex maximus

Vicar of Christ may be derived from the authority given by Christ, but that doesn't mean "Pontifex Maximus" is unsuitable. They emphasize different parts of the Papal office. But as Rome became Christian the supreme religious authority naturally passed from the chief pagan Roman priest (an officer appointed by the Emperor and earlier by the Senate) to the chief Christian priest, which would be the Vicar of Christ.

In regards the significance of the title today, note that of the titles in use today: Bishop of Rome, Vicar of Jesus Christ, Successor of the Prince of the Apostles, Supreme Pontiff of the Universal Church, Primate of Italy, Archbishop and Metropolitan of the Roman Province, Sovereign of the Vatican City State, Servant of the servants of God. The only one which refers to universal priestly authority is "Supreme Pontiff of the Universal Church". Two of the others suggest that less explicitly, one is a purely temporal/secular title and a few are subsidiarity ecclesial titles. Thus "Supreme Pontiff" (or "Pontifex Maximus") is used to specifically indicate the Pope formally.

Canon Law doesn't particularly comment on the title, but the term used to refer to the Pope in Canon law (not counting the introduction) is always "The Roman Pontiff". The terms "pope" and "Supreme Pontiff" only occur in the Introduction and generally speaking, those terms refer to specific holders of the office at the time point referred to (As opposed to referring to any future holder of the office in regards the law).

The world may have gone secular, but the Pope still claims to be the highest Catholic priest (and furthermore, for Catholics there aren't a plurality of Churches); hence, the title is still appropriate.

Not the answer you're looking for? Browse other questions tagged catholicism church-history papacy civil-government canon-law .

2
Is it true the term 'pontifex maximus' was the name of the high priest of the Roman Cult of Emperor Worship, before being adopted by the Pope?
5
Is the Pope morally obliged to submit to every secular authority?
9
What exactly did Pope Gregory the Great mean by "Universal Bishop?"
5
Hierarchy of Catholicism, government, and papal teaching
7
What would happen if the Pope were to abuse his power?
3
Does the Pope teach infallibly ONLY when he speaks ex cathedra?
4
Can a pope name his successor?
7
When was the formal title of Pope first officially bestowed on the Bishops of Rome?
1
Does the State have the right to correct the Church in theological matters?