A priest I requested kindly to bless salt and oil did not use the prescribed prayer but used his own, is the blessing valid?

If a priest blesses salt and oil, but does not use the prescribed prayer, but used his own wording, is the blessing valid?

But there is a caveat to my response.

Rome allows objects to be blessed by deacons, priests and bishops. The traditional method would be to use the prayers contained in the Rituale Romanum, making a sign of the cross over the object to be blessed and sprinkling it with holy water.

A priest saying a few word in blessing, while employing the sign of the cross is sufficient to make the blessing valid.

Sometimes the clergy member blessing something will say a few words of their own before giving the words of blessing, and sometimes the cleric will simply say a silent prayer over the object and make the Sign of the Cross over it. Any of these methods is a valid blessing done with the intent of the Church. - Q & A: Blessing Objects and Things

Not using the traditional formula will weaken the efficaciousness of some prescribed blessings, especially if a minor exorcism is involved.

Some priest chose to do such simple blessings since there is no holy water on their person.

Some of the formulae contained in the Rituale Romanum are in fact minor exorcisms. In these cases the ritual must be followed word for word, with the sprinkling of holy water at the appropriate moment.

For this reason alone, I carry a Pocket Holy Water Sprinkler with me when attending church. I also bring with me a hard copy of the prayers I desire the priest to employ.

There is a Benedictine Abbey near my residence and the abbot carries an Aspergillum as seen below to bless objects (usually medals), but employs his own words of blessing. If a particular object have a blessing listed in the Rituale Romanum, I make a hard copy to take with me when getting it blessed. Most priests do not carry the Book of Blessings with them, but some do. 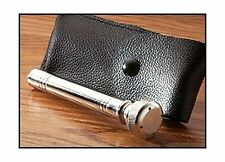 As Peter showed in his comment, some blessings are in fact minor exorcisms and just not simple blessings. In theses cases the prayers prescribed by Rome must be followed.

According to Catholic belief demons or fallen angels retain their natural power, as intelligent beings, of acting on the material universe, and using material objects and directing material forces for their own wicked ends; and this power, which is in itself limited, and is subject, of course, to the control of Divine providence, is believed to have been allowed a wider scope for its activity in the consequence of the sin of mankind. Hence places and things as well as persons are naturally liable to diabolical infestation, within limits permitted by God, and exorcism in regard to them is nothing more that a prayer to God, in the name of His Church, to restrain this diabolical power supernaturally, and a profession of faith in His willingness to do so on behalf of His servants on earth.

The chief things formally exorcised in blessing are water, salt, oil, and these in turn are used in personal exorcisms, and in blessing or consecrating places (e.g. churches) and objects (e.g. altars, sacred vessels, church bells) connected with public worship, or intended for private devotion. Holy water, the sacramental with which the ordinary faithful are most familiar, is a mixture of exorcised water and exorcised salt; and in the prayer of blessing, God is besought to endow these material elements with a supernatural power of protecting those who use them with faith against all the attacks of the devil. This kind of indirect exorcism by means of exorcised objects is an extension of the original idea; but it introduces no new principle, and it has been used in the Church from the earliest ages. - Exorcism (Catholic Encyclopaedia)

I get olive oil blessed each year if possible during Eastertide according to traditional old rite, in Latin, by priests who say the Mass of the Ordinary Form and generally have no problems. Know your priests first. Some will be uncomfortable with it and many do not even read Latin, in which case one can always find a vernacular translation somewhere online.

Not the answer you're looking for? Browse other questions tagged catholicism blessings sacramentals or ask your own question.

2
Are things commonly blessed by priests at certain times of the year appropriate to bring to a priest for a special blessing?

6
What is the biblical argument used by Protestants against the Catholic doctrine of Penance?
6
What is the basis for penance (satisfaction) in sacramental confession?
4
Can a priest add his own prayers to the Mass after the dismissal?
8
According to Roman Catholic teaching, did Martin Luther's alterations to the order of the Mass invalidate his consecration of the elements?
3
Can the laity use exorcised salt? If so, what are the rules for the proper use, handling, and storage of exorcised salt?
6
How do I know when to cross myself during Mass (Novus Ordo)?
1
According to Catholicism, is it permitted for a priest to employ the Benedictio Deprecatoris prayer to stop the spread of the coronavirus?
2
Are things commonly blessed by priests at certain times of the year appropriate to bring to a priest for a special blessing?