How to interpret C.S. Lewis's use of magic by good moral agents in the Chronicles of Narnia to be acceptable to earth Christians?

C.S. Lewis knew exactly what he was doing when he wrote The Chronicles of Narnia, as many theses, dissertations, and books have shown. He purposefully fused elements from European mythology (like dwarfs, dryads, dragons), Arthurian legends, medieval feudalism, mysticism, as well as Christianity when creating the imaginary world of Narnia. While he did NOT intend to write Narnia as a Christian allegory (such as Bunyan's Pilgrim's Progress), he clearly intended the Narnian characters to possess analogous moral agencies with the earth Christians counterparts through the creatures's relationship with Aslan and the Emperor beyond the sea.

Magic in Narnia vs. the Bible, explaining to children

Christian children and adults alike obviously want to read The Chronicles of Narnia alongside the Bible. But how do we reconcile some use of magic depicted positively in Narnia with apparent Biblical condemnation of all use of the magical arts (see Bible verses)? When you read the Bible on some days and Narnia on other days to your kids, the natural questions from intelligent kids, especially whose parents prohibit them to read Harry Potter books are: "But Daddy, why is magic OK in Narnia, but not in the Bible? Why is it OK for me to read Narnia but not Harry Potter? Why is the magician Merlin in The Story of King Arthur and His Knights a good guy?"

Imagine the Narnia children themselves (Peter, Lucy, Edmund, etc.). We presume they are Christians on earth and read the Bible. How would they translate their experience of Narnian magic: embracing the positive ones into the earthly Christian equivalent but refraining from the negative ones?

Types of magic use, and how C.S. Lewis depict them in the stories

It looks like C.S. Lewis was careful enough while the story is happening on earth to disapprove the use of magic: portraying the usage of the magic rings for traffic between Earth and Narnia in The Last Battle and the amateur magician uncle's dabbling with magic in The Magician's Nephew negatively. Even in Narnia, it is clear that several magicians are portrayed negatively, such as the White Witch in LWW and the hag whom Nikabrik invited in PC. That's not problematic at all.

But what about Doctor Cornelius who used a little magic in PC, the magician Coriakin, and even Lucy's reciting the spell to make the Duffers visible again in VDT? After that, Coriakin even used more magic to feast the Narians, generated a map of their travel magically on parchment (which Caspian then hang in Cair Paravel), and even "mended the stern of the Dawn Treader where it had been damaged by the Sea Serpent and loaded her with useful gifts." All those are depicted positively.

Another issue is how the characters and the narrator seem to be using the word "magic" as though it's a morally neutral descriptive term. "Aslan mentions "Deep magic" in LWW. C.S. Lewis labels the traffic between Earth and Narnia as "magic", Susan's gift as "the great magic horn of Narnia", Lucy's cordial as "magic fluid", preservation of treasure in Prince Caspian as "by some magic in the air", and countless other references.

Problem of translation between Narnia magic and Biblical concepts

Obviously the answer is complicated. We probably need to translate C.S. Lewis use of the word "magic" in positive Narnian context to equally positive concept in real earth and Christianity. When Aslan attributes his resurrection to "Deep Magic" it probably means miracle. The operation of Susan's horn is analogous to prayer. Lucy's cordial is analogous to oil of the sick, etc.

An acceptable answer has to provide a single (or a handful) of principles that can translate every occurrence of magic in all 7 books, either by good actors or bad actors. Especially when the narrator (C.S. Lewis) depicts the occurrence positively, because C.S. Lewis is Christian, there has to be a Christian explanation that does not violate the Biblical prohibition on magical practices.

In the real world, there is no fairy tale magic. (Devotees of Harry Potter, take note.) If you see something "magical", you're either seeing (1) a fraud, (2) a marvel of technology, (3) a holy miracle of God, or (4) some kind of demonic action.

The Bible and the Church forbid "sorcery" and "witchcraft" because those words literally refer to that practice (#4) of trying to obtain supernatural power through devil-worship. We can say that these practices are morally wrong, and that you should not go to fortune tellers and witch doctors, without having to accept the premise that they actually work -- they probably don't. But if they do, demons are involved.

That's not to say that miracles of God don't happen in our lives. I'm sure they do, but I have a hunch they are recognizably different from sorcery and witchcraft, so you wouldn't mistake the two.

On the other hand, in a fairy tale, there is such a thing as fairy tale magic. That kind of magic, in those fictional worlds, does not come as a result of devil-worship. You can think of it as a kind of marvellous technology that works on Narnian laws of physics. For that reason, it's not a sin for Narnians to use benign magic for good. Nor is it a sin for Harry Potter or Merlin or your kid's favorite Disney character to use fairy-tale magic. The risk of sin is that someone in the real world might mistake fantasy for reality and make moral compromises to try to obtain supernatural power here.

How to interpret C.S. Lewis's use of magic by good moral agents in the Chronicles of Narnia to be acceptable to earth Christians?

Magic is not a new subject matter in Christian fiction. It is one that seems to come to the forefront more often in modern times due to such books as The Lord of the Rings and C. S. Lewis’ The Chronicle of Narnia tales.

Magic included in Christian fiction is not new. I can remember reading such books when I was quite young. Some were several hundred years old. In fact, they were generally written not so much to promote the use of magic, but rather to make some Christian moral teaching or doctrine come to light. Besides real magical spells were never given. After all, it is simply Christian fiction.

The use of real spells has no use in Christian fiction and neither Tolkien or Lewis employed it. They are both great Christian writers!

C.S. Lewis was a brilliant Christian writer and knew how to make the imaginary come alive. We call this simply Christian fantasy which can allow an author, like Lewis to model his story around the essence of the moral life between good and evil.

“So why bother putting magic in stories at all?” someone might ask. “If magic can be an issue, why shouldn’t a Christian writer leave it out of stories altogether?” I’d say there are three basic reasons to work out a means to include magic in stories: 1) Fantasy is a popular genre with loads of readers. It makes sense to desire to reach them within their genre expectations from a strictly analytical point of view. Not to mention it can inherently interesting to write fantasy for people who’ve read it–and fantasy normally contains magic. 2) Fantasy has the ability to use analogy or allegory or myth-making to create powerful messages about the world we live in. And what the story calls “magic” can be a key part of any such analogy. C.S. Lewis achieved using the word “magic” that way in the Chronicles of Narnia, in fact. 3) And it so happens to be that magic is a staple of fantasy as much as aliens are a staple of science fiction. You could write the one without including the other, but it would not really represent the genre well for the most part. Or be as interesting. - Seven Ways to Deal With the Problem Magic Poses Christian Fantasy Writers

In his Chronicles of Narnia, Lewis makes it clear that the source and creation of all life is Jesus Christ, symbolized by the Great Lion, Aslan. And Aslan tells the children who come into Narnia from our world that they were there because He has called them; and that they will know Him in their own world, too – only “by another name.” It takes a very dense reader not to know that this other name is Jesus.

This is what Lewis gets right. In all seven Narnia books, the theme is getting to know Christ. For the most part, this is accomplished through obedience and love. This is a very big thing to get right. - After Lewis and Tolkien 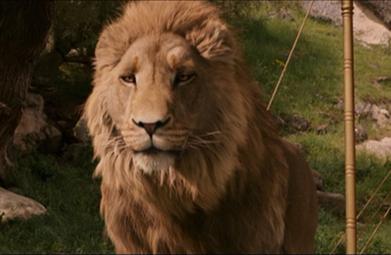 Aslanin the 2005 film The Chronicles of Narnia: The Lion, the Witch and the Wardrobe.

Magic or no magic The Chronicles of Narnia is full of Christian themes and imagery.

In one of his last letters, Lewis wrote, "Since Narnia is a world of Talking Beasts, I thought He [Christ] would become a Talking Beast there, as He became a man here. I pictured Him becoming a lion there because (a) the lion is supposed to be the king of beasts; (b) Christ is called "The Lion of Judah" in the Bible; (c) I'd been having strange dreams about lions when I began writing the work."

In Narnia, magic is used to represent the non-human power that God has, and Aslan himself is seen to be powerful. For example, in the Bible, prophets have non-human abilities but it is seen as spiritual gifts rather than evil magic, because it was given to them by God.

In the Bible, magic often refers to people who use spiritual power for their own gain, to prophesy against God's will or to harm others (this is where Jadis the White Witch represents Satan - she has power which is in opposition to Aslan's good power).

Not the answer you're looking for? Browse other questions tagged cs-lewis christian-literature witchcraft narnia .

17
C.S. Lewis's petitionary prayer paradox
4
Identifying a source for this C.S. Lewis quote "This also is Thou: neither is this Thou"