Peter is sometimes depicted as a poor uneducated fisherman before he met Jesus (I am referring to quite a few homilies I have heard in different churches). Do we know what languages he spoke? Did he know the scriptures well? What his social status was likely to be?

Historical facts seem to be lacking in order to make a reasonable conclusion whether St. Peter was in fact poor or not and how well educated he was.

Nevertheless there are a few glimmers of historical and biblical statements that may shed some light on this subject.

What do we know about St. Peter? His original name was Simon and was born in Bethsaida (John 1:42, 44), a town on Lake Genesareth. He was married and most likely had children.

St. Peter's true and original name was Simon, sometimes occurring in the form Symeon. (Acts 15:14; 2 Peter 1:1). He was the son of Jona (Johannes) and was born in Bethsaida (John 1:42, 44), a town on Lake Genesareth, the position of which cannot be established with certainty, although it is usually sought at the northern end of the lake. The Apostle Andrew was his brother, and the Apostle Philip came from the same town.

Simon settled in Capharnaum, where he was living with his mother-in-law in his own house (Matthew 8:14; Luke 4:38) at the beginning of Christ's public ministry (about A.D. 26-28). Simon was thus married, and, according to Clement of Alexandria (Stromata, III, vi, ed. Dindorf, II, 276), had children. The same writer relates the tradition that Peter's wife suffered martyrdom (ibid., VII, xi ed. cit., III, 306). Concerning these facts, adopted by Eusebius (Church History III.31) from Clement, the ancient Christian literature which has come down to us is silent. Simon pursued in Capharnaum the profitable occupation of fisherman in Lake Genesareth, possessing his own boat (Luke 5:3). - St. Peter, Prince of the Apostles

It is traditionally believed that Peter wrote two epistles contained in the New Testament, however authenticity in modern times contests the actual authorship.

The authenticity, universally admitted by the primitive Church, has been denied within the past century by Protestant or Rationalist critics (Baur and the Tübingen School, Von Soden, Harnack, Jülicher, Hilgenfeld, and others), but it cannot seriously be questioned. It is well established by extrinsic and instrinsic arguments.

(a) in writings of the first and second centuries, e.g., Justin's letter to the Churches of Lyons and Vienne, Irenaeus, Clement of Alexandria, Papias, Polycarp, Clement of Rome, the "Didache", the "Pastor" of Hermas, and others. The Second Epistle of St. Peter, admitted to be very ancient even by those who question its authenticity, alludes to an earlier Epistle written by the Apostle (iii, 1). The letter therefore existed very early and was considered very authoritative. (b) Tradition is also unanimous for St. Peter's authorship. In the second and third centuries we have much explicit testimony to this effect. Clement and Origen at Alexandria, Tertullian and Cyprian in Africa, the Peshitto in Syria, Irenaeus in Gaul, the ancient Itala and Hippolytus at Rome all agree in attributing it to Peter, as do also the heretics, Basilides and Theodore of Byzantium. (c) All the collections or lists of the New Testament mention it as St. Peter's; the Muratorian Canon, which alone is at variance with this common tradition, is obscure and bears evident marks of textual corruption, and the subsequent restoration suggested by Zahn, which seems much more probable, is clearly favourable to the authenticity. Moreover Eusebius of Caesarea does not hesitate to place it among the undisputed Scriptures.

Examination of the Epistle in itself is wholly favourable to its authenticity; the author calls himself Peter, the Apostle of Jesus Christ (i, 1); Mark, who, according to the Acts of the Apostles, had such close relations with Peter, is called by the author "my son" (v, 13); the author is represented as the immediate disciple of Jesus Christ (i, 1; v, 9, 11-14); he exercises from Rome a universal jurisdiction over the whole Church (v, 1). The numerous places in which he would appear to be the immediate witness of the life of Christ (i, 8; ii, 21-24; v, 1), as well as the similarity between his ideas and the teaching of the Gospels, are eloquently in favour of the Apostolic author (cf. Jacquier, 251). Finally, some authors consider that the Epistle and the sermons of St. Peter related in the Acts show an analogy in basis and form which proves a common origin. However, it is probable if not certain that the Apostle made use of an interpreter, especially of Sylvanus; St. Jerome says: "the two Epistles attributed to St. Peter differ in style, character, and the construction of the words, which proves that according to the exigencies of the moment St. Peter made use of different interpreters" (Ep. cxx ad Hedib.). Peter himself seems to insinuate this: Dia Silouanou houmin . . . egrapha (v, 12), and the final verses (12-14) seem to have been added by the Apostle himself. Without denying that Peter was able to use and speak Greek, some authors consider that he could not write it in the almost classic manner of this Epistle. Nevertheless it is impossible to determine exactly the share of Sylvanus; it is not improbable that he wrote it according to the directions of the Apostle, inserting the ideas and exhortations suggested by him.

So what can glean from this.

Notwithstanding this we still see people calling St. Peter poor. Such is the title of a church in the village of Noss Mayo, in Devon, England, was built in 1226: Church of St Peter the Poor Fisherman!

Possibly one can employ the term poor in reference to St. Peter having denied Our Lord during his Passion rather than his ability to fish for a living or the state of his finances, which are reasonably unknown to us in exact detail.

Let me explain this. The French have a have a phrase for a poor man ”homme pauvre", but they equally reverse the word order to ”pauvre homme". Thus it is not impossible that St. Peter the fisherman was a poor fisherman or was not wealthy, but he was simply the discipline that denied Our Lord three times! Thus is simply a suggestion on this take. Oh! Poor, poor Peter! 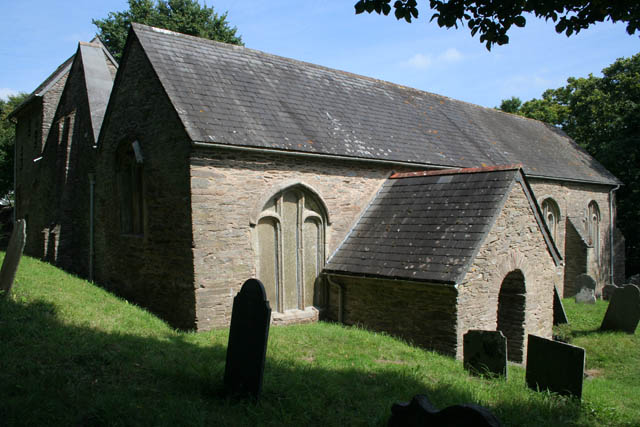 One thing is certain, that St. Peter was like all of us a poor sinner ("pauvre pécheur" in French). Whether or not he was a poor fisherman ("pauvre pêcheur" in French), I will let other decide. In any case these two French expression are both pronounced in the same way, en Français!

In Acts 4, we have the (biased) opinion of the Sanhedrin:

13 When they saw the courage of Peter and John and realized that they were unschooled, ordinary men, they were astonished and they took note that these men had been with Jesus. 14 But since they could see the man who had been healed standing there with them, there was nothing they could say. 15 So they ordered them to withdraw from the Sanhedrin and then conferred together.

The inference is that "unschooled" means not able to read and write, and ordinary means not wealthy or prominent in society, though not necessarily poor. As Ken Graham states in his answer, he had a boat. My dad had a boat when I was a kid, a nice trimaran. I consider my dad, by most people's standards, is rich. I don't own a boat. I am not rich.

It is true that Peter probably did not know how to read and write, since the book of Mark in the New Testament writing is given by tradition to Peter's experiences; 1 Peter was written by Sylvanus (1 Peter 5:12). 2 Peter 3:1 shows Peter said he wrote both letters, but it is likely via Sylvanus on both, as shown at the end of 1 Peter 5.

As for being wealthy, he worked with the sons of Zebedee and they worked with their father. He appeared to own his own boat. But, when Jesus called him away from fishing to follow him, it's not clear that he continued to fish. The scripture (Luke 5:11; 18:28) explicitly shows he left everything to follow Christ. This appears to be what Peter did - left everything to follow Christ, which could be easily seen in his case to have continued to be a full time job. Peter only is written as fishing one more time, after the resurrection of Christ.

Most of what is said I would agree with. The religious leaders looked down on the ordinary people much like snobs anywhere today - making distinctions based on birth, skin colour, education, accent, etc. Peter had a rural accent from Galilee. Peter's boat was his work, he being a fisherman. That's a smell it's hard to rid yourself of entirely.

Most Israelites could read. Jesus, a carpenter, certainly could. Peter in Acts 2:16-21, Peter quotes Joel 2:28-32 basically verbatim from the LXX, although with one change under inspiration to refer to the (then) current fulfillment. It indicates he could and did read. James also quoted verses from Amos 9:11,12. Few today could quote from the minor prophets so freely!

Writing was a skill few had and was a career of it's own.

15
Was the apostle Peter martyred in Rome?
10
Was Peter part of a militant sect?
10
Why was Peter Fishing Naked (John 21:7)?
15
Why did Jesus change Peter's name, according to non-Catholic theology?
14
What evidence is there that Peter was a bishop in Rome?
1
What were the ages of the Apostles Peter and John when Jesus was crucified?
1
What is the view of Reformed Protestantism on those who were 'numbered with' the apostles but did not, as did Paul, receive Peter's approbation?