How did the Apostle Matthew die?

Which one is true?

How did the Apostle Matthew died?

We simply do not know for sure. The facts about his death have not been historically proven, beyond a reasonable doubt.

Of Matthew's subsequent career we have only inaccurate or legendary data. St. Irenæus tells us that Matthew preached the Gospel among the Hebrews, St. Clement of Alexandria claiming that he did this for fifteen years, and Eusebius maintains that, before going into other countries, he gave them his Gospel in the mother tongue. Ancient writers are not as one as to the countries evangelized by Matthew, but almost all mention Ethiopia to the south of the Caspian Sea (not Ethiopia in Africa), and some Persia and the kingdom of the Parthians, Macedonia, and Syria.

According to Heracleon, who is quoted by Clement of Alexandria, Matthew did not die a martyr, but this opinion conflicts with all other ancient testimony. Let us add, however, that the account of his martyrdom in the apocryphal Greek writings entitled "Martyrium S. Matthæi in Ponto" and published by Bonnet, "Acta apostolorum apocrypha" (Leipzig, 1898), is absolutely devoid of historic value. Lipsius holds that this "Martyrium S. Matthæi", which contains traces of Gnosticism, must have been published in the third century.

There is a disagreement as to the place of St. Matthew's martyrdom and the kind of torture inflicted on him, therefore it is not known whether he was burned, stoned, or beheaded. The Roman Martyrology simply says: "S. Matthæi, qui in Æthiopia prædicans martyrium passus est".

Various writings that are now considered apocryphal, have been attributed to St. Matthew. In the "Evangelia apocrypha" (Leipzig, 1876), Tischendorf reproduced a Latin document entitled: "De Ortu beatæ Mariæ et infantia Salvatoris", supposedly written in Hebrew by St. Matthew the Evangelist, and translated into Latin by Jerome, the priest. It is an abridged adaptation of the "Protoevangelium" of St. James, which was a Greek apocryphal of the second century. This pseudo-Matthew dates from the middle or the end of the sixth century.

The Latin Church celebrates the feast of St. Matthew on 21 September, and the Greek Church on 16 November. St. Matthew is represented under the symbol of a winged man, carrying in his hand a lance as a characteristic emblem. - St. Matthew (Catholic Encyclopaedia)

There is no historical consensus on the person of Matthew. There are several conflicting accounts, and the Greek text does not state anywhere he was an eyewitness (and therefore a disciple).

Clement of Alexandria quotes Heracleon, one of the earliest commentators on the New Testament, as saying that Matthew died naturally:

“But neither will this utterance be found to be spoken universally; for all the saved have confessed with the confession made by the voice, and departed. Of whom are Matthew, Philip, Thomas, Levi, and many others.” —Stromata

But while earlier records are often assumed to be more reliable (because they’re closer to when the events actually happened), most scholars don’t accept Heracleon’s account today. All the other early records of Matthew’s death claim he was martyred, but they disagree about how and where it happened. The early church fathers said he was burned, stoned, stabbed, or beheaded.

The problem is the gospel of Matthew is anonymous: the author is not named within the oldest surviving text, and the superscription "according to Matthew" was added some time in the second century, although the gospel doesn't state it's an eyewitness account. The historically very likely incorrect tradition that the author was the disciple Matthew begins with the early Christian bishop Papias of Hierapolis: 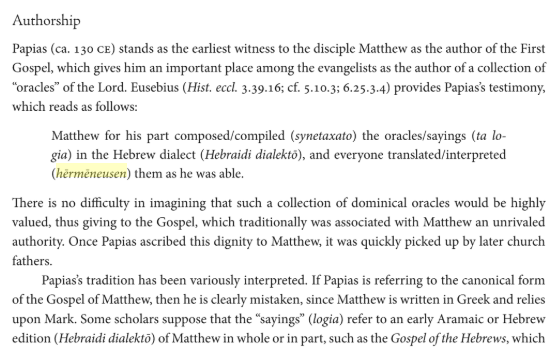 From "New Testament Foundations: An Introduction for Students"

The consensus is that Papias does not describe the Gospel of Matthew as we know it, and it is generally accepted that Matthew was written in Greek, not in Aramaic or Hebrew. See Ehrman, Bart D. (1999). Jesus: Apocalyptic Prophet of the New Millennium. Oxford University Press.

Not the answer you're looking for? Browse other questions tagged death apostles martyrdom matthew or ask your own question.

32
How did Judas die?
6
Did the apostle James the Greater travel to Spain and was he martyred in Jerusalem?
11
Is Levi from Luke 5:27 and Mark 2:14 referring to the apostle Matthew
9
How did the Apostles die?
10
How does one become an Apostle in the LDS Church?
2
In Luke 5 did Levi become an apostle almost straight away?
8
What evidence exists to support church traditions regarding the deaths of the following apostles?