With the present situation of the coronavirus affecting many of us, and many sensing the need to be able to get outside and do something, if one’s local restrictions permit it, I would like be able to go out “in the wild” and be able to identify various plants that are either related to Christian folklore and/or Christian symbolisms of some sort.

What got my interest in this subject was when I was doing research on Christian traditions with foodstuffs from around the world.

For example, some time ago I came across an interesting tidbit (at least for me) about Ostrich ferns also known as the fiddlehead fern:

Fiddleheads or fiddlehead greens are the furled fronds of a young fern, harvested for use as a vegetable.

The fiddlehead resembles the curled ornamentation (called a scroll) on the end of a stringed instrument, such as a violin. **It is also called a crozier, after the curved staff used by bishops, which has its origins in the shepherd's crook **. - Fiddlehead fern (Wikipedia)

Another more common example can be found in the plant known as St. John’s Wort:

St John's wort is named as such because it commonly flowers, blossoms and is harvested at the time of the summer solstice in late June, around St John's Feast Day on 24 June. The herb would be hung on house and stall doors on St John's Feast day to ward off evil spirits and to safeguard against harm and sickness to man and live-stock. The genus name Hypericum is possibly derived from the Greek words hyper and eikon, in reference to the tradition of hanging plants over religious icons in the home during St John's Day.

Thus my question is as follows: Does there exist a good resource material source book that deals with such plants involving Christian folklore, legends and traditions? Symbolism is likewise included.

If no book truly is out there, I would then prefer an online source of information. For what it is worth, I am not limiting this question to any specific Christian tradition. Any sources in other languages or non English countries are also welcome.

Ocimum tenuiflorum is medicinal plant native to India. It is grown with reverence in almost all Hindu families, right in front of the house, on an elated structure. It is locally known as Tulasi. Interestingly, its English name is Holy Basil which was given by the Christian Missionaries!

You also have the Easter Lily (Lilium longiflorum ) which is said to flower only at the time of Easter, and the Bleeding Heart (Lamprocapnos spectabilis) plant which reminds one of the Holy Heart of Jesus .

In Southern India we have the wild orchid, which naturally grows on tree-trunks. Locals call one such orchid as St Joseph's plant, after the miracle- stick that Joseph is said to have carried to the home of Mary before their marriage, and which flowered when he reached the place .

There is a popular tradition that the name Marigold arose from the circumstance of the Virgin Mary having worn this flower in her bosom.

Daisy's meaning The Eye of Day

Daisies symbolize innocence and purity. This stems from an old Celtic legend. According to the legend, whenever an infant died, God sprinkled daisies over the earth to cheer the parents up.

(That might be more pagan than Christian, but I think it's rather nice) And I like that the word "Daisy" simply means the "Eye of day".

Holly is a Christmas / Easter symbol

The prickly green leaves of the holly are a reminder to early Celtic Christians of the crown of thorns Jesus wore on the day of the Crucifixion. The bright red berries symbolized the blood of Christ spilled for the sins of mankind.

The Poinsettia is another Christmas flower with a tradition

The star like leaf pattern was said to resemble the Star of Bethlehem (Christmas Star). The red color is to symbolize the blood of Jesus Christ and His crucifixion on the cross.

And Tomie dePaola, of happy memory, had a good story about it.

The Dogwood tree, (apparently not the gnarly red stuff from swamps) has a story tied to the Crucifixion:

The legend holds that the tree was once very large, like a Great Oak tree, and because its wood was strong and sturdy, it provided building material for a variety of purposes. According to the story, it was the dogwood tree that provided the wood used to build the cross on which Jesus was crucified.

And Rosemary has a place in history ...

tied to Mary, the Mother of Jesus. A rosemary bush is said to have given her shelter during the flight to Egypt. Another story credits the plant's blue flowers to Mary's act of laying her freshly washed blue cloak over a rosemary shrub to dry.

And you could go on and on with flowers in honor of the Blessed Virgin:

Which is pretty great this time of year.

I found the best way to find these is to just type "Legend of the ..." and insert your favorite flower. All flowers have legends, almost all have pagan legends, but half the ones with pagan legends have been Christianized in some way, which just goes to show, we have to Baptize more flowers. 33 days to Morning Glory is a good start. I love Morning Glories, those should not be solely pagan flowers.

This post is a community wiki answer, so that others may add their own appropriate or interesting (local) Christian plant lore if so desired.

There certainly no one source that will cover everything about Christian plant folklore, traditions, legends and symbolism.

One of the best sources, I found, can be seen in the book Plant Lore, Legends and Lyrics (Myths, Traditions, Superstitions and Folklore of the Plant Kingdom) by Richard Folkard Jr. Chapter 5 (page 40) deals with The Plants of the Christian Church. This chapter deals with plant on a biblical basis, as well as in relation to the lives of saints and Christian festivals and feast days.

For plants in the bible the Catholic Encyclopedia has an excellent article published as such: Plants in the Bible.

Some modern named plants are not readily known. For example I remember being asked out to dinner with a family that ate only cheese and fruits at lunch. In the course of the meal we ate some passionfruit. No one knew the origin of why this fruit was called thus and it was decided that we I’d not know which Passion, it was to stimulate? We were all wet behind the ears on this topic.

If fact the passionfruit can be found in Mexico, Central and South America. The symbolism of the passion flower is as follows: 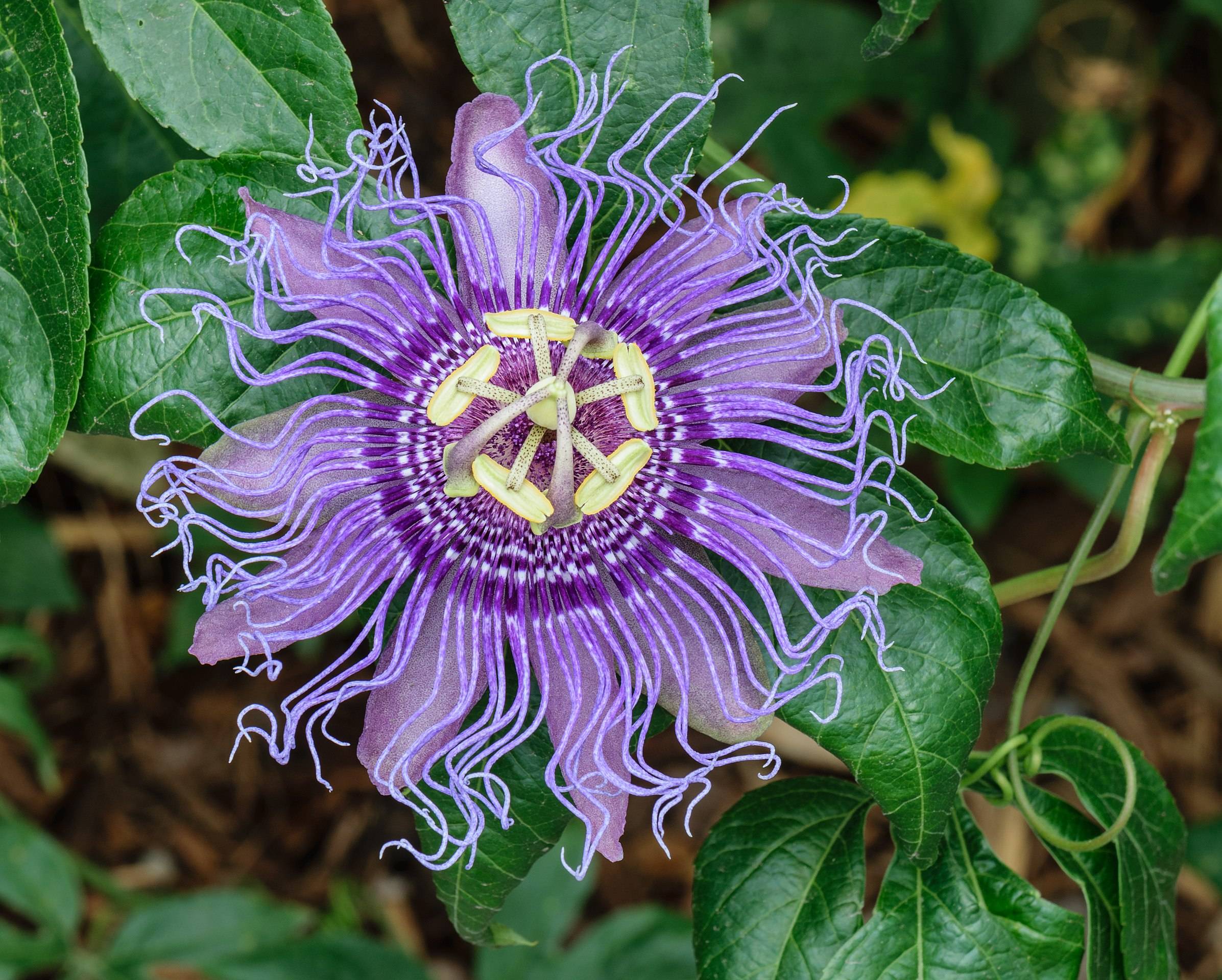 Bouquets of basil leaf are blessed on the Feast of the Exsultation of the Cross (September 14) and sprinkled with Holy Water, after a legend that this herb grew at the foot of the Our Lord’s Cross on Good Friday. This is equally an Orthodox pius tradition and pius belief.

Some account for the connection between the herb basil and the Cross as follows:

The herb, basil has long been associated with today’s feast of the Exaltation of the Holy Cross. The word “basil” is related to basileios, from the Greek word for king.

According to the liturgical legend, the Empress Saint Helena found the location of the True Cross by digging for it under a colony of basil. Basil plants were reputed to have sprung up at the foot of the Cross where fell the Precious Blood of Christ and the tears of the Mother of Sorrows.

A sprig of basil was said to have been found growing from the wood of the True Cross. On the Feast of the Exaltation of the Holy Cross it is customary in the East to rest the Holy Cross on a bed of basil before presenting it to the veneration of the faithful.

Also, from the practice in some areas of strewing branches of basil before church communion rails, it came to be known as Holy Communion Plant. The blessed basil leaf can be arranged in a bouquet at the foot of the crucifix; the dried leaves can also be used by the faithful as a sacramental. - Blessing of Basil on the feast of the Exaltation of the Holy Cross 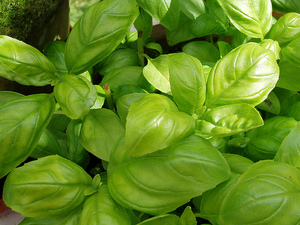 Birch boughs and (St. John Wort, as well as other plants and flowers were used to decorate the the Church doors in England on St. John’s Eve (June 23) in the 16th century. Source

The Baptist's day, midsummer day, was a general holiday, when everyone did indeed rejoice, a day full of games and sports and dancing. On the eve of the feast everyone's door "decorated with birch leaves, St. John's wort and white lilies and such-like, garnished upon with garlands of beautiful flowers, had also lamps of glass, with oil burning in them all the night. . . - Catholic Activity: St. John the Baptist's Day

Not the answer you're looking for? Browse other questions tagged tradition reference-request legend .