Did Mosaic covenants follow Ancient Near East Suzerain Treaties or was it the other way around?

I often heard theologians said that Mosaic covenant followed the structure of Ancient Near East (ANE) treaties that were there in Moses' time. For example, here is the view of Meredith Kline: Suzerain Treaties & The Covenant Documents the Bible.

Why do some theologians argue that the Mosaic covenant follows ANE treaties?

I'm rather inclined to think otherwise that ANE treaties were derived from Noahic covenant and Mosaic covenant followed the pattern of previous biblical covenants (Adamic, Abrahamaic, Noahic). The reason is as follows. All human in ANE region (if not the whole world) were derived from Noah (Gen. 9:19) and his sons because of the Great Flood. Right after the flood, God made a covenant with Noah (Gen. 9:1-17). After the covenant, the Scripture recounts the descendants of Noah's sons (Gen. 10). The knowledge of the covenant was passed down through them, even until Moses' time, who then wrote everything down. We also see that Laban and Jacob made a covenant. Jacob swore by YHWH., but Laban swore not by YHWH, but rather by the god of Nahor. So, the concept of covenant lingers in both believers and unbelievers.

Hence, I would rather believe that ANE people had an understanding of a covenant (or treaty) from the covenant of Noah. Also, God who had previously made covenants with Adam, Abraham, and Noah followed the same pattern when He made another covenant with Moses.

What are some evidences against my argument?

A covenant is simply a binding agreement or treaty. A suzerain covenant is a covenant between a sovereign king (suzerain), in effect an emperor, and a vassal king and thus with the vassal nation. The terms of such covenants are decided by the suzerain king, they are not negotiated between the two kings.

One of main issues of discussion amongst archaeologists (not theologians) is not where suzerain covenants per se orginated, but which covenant forms the covenants of the Pentateuch are most similar to in structure.

So in the blue corner we have Professor Kenneth Kitchen with a lot about the different covenant forms over the centuries in the Ancient Near East (ANE). In the red corner we have Dr Bryant Wood.

Kenneth Kitchen gives a large amount of information about the changes to the suzerain covenant forms of the surrounding nations (during the era of the empires of those nations, such as the Hittite Empire, when they were producing Suzerain/Vassal covenants) in his book "On the Reliability of the Old Testament". Since we know when those empires existed if we can see a distinct match between the Pentateuch covenants and those S/V covenants of other nations then a date can be placed on the writing of the Pent. He then claims the best match of covenant puts the composition of the Pentateuch in the 13th century BC.

Bryant Wood claims that Professor Kitchen has been selective in his examination of the covenants in the Pentateuch and has resorted to a bit of special pleading. Bryant Wood also counterclaims that the existence of oaths in the pentateuchal covenants place them in the 1600 to 1400 BC period.

Unfortuately I cannot give an article by Kenneth Kitchen on the issue since my source is his book "On the Reliability of the Old Testament". Personally I think his date of the Exodus of about 1260 BC is wrong: he assumes that 1 Kings 6:1 is not to be taken literally, and this is a big mistake, in my opinion, but his book is still full of very valuable information for lovers of Scripture.

An article by Bryant Wood which touches on this subject can be found here:-

ANE Treaty form is something very well-known to scholars.

From ANCIENT NEAR EASTERN VASSAL TREATIES AND THE BOOK OF REVELATION. POSSIBLE LINKS 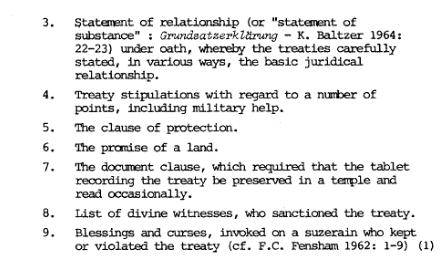 The study contains examples comparing Deuteronomy to a treaty by Hittie king Mursilis (around 1500BCE). Deuteronomy was composed in Jerusalem in the 7th century BCE in the context of religious reforms advanced by King Josiah (reigned 641–609 BCE).

The oldest (Monarchic) parts of the OT were written no earlier than the 8th century BCE. So clearly, ANE Treaty Form is much older.

As to the comment this treaty form was not in use around the 8thy centory BCE, KAI 222-224 The Sfire or Sefire steles are three 8th-century BCE basalt stelae containing Aramaic inscriptions. Deuteronomy 28 contains similar content and structure of the curses in this treaty text, as detailed in this study. 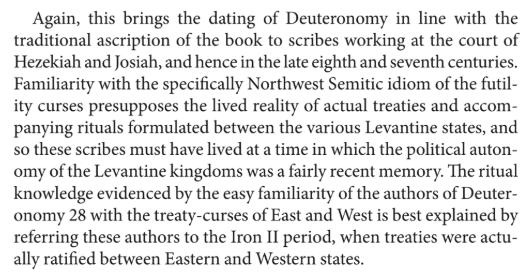 Not the answer you're looking for? Browse other questions tagged history genesis covenants deuteronomy or ask your own question.

30
Who was Pharaoh when Moses lived in Egypt?

7
How are the different covenants related to or different from each other?
6
What was the Christian response to death-loving practices of Ancient Roman society?
5
Was the Mosaic Covenant a covenant of “works” or “grace”?
11
Do Christians believe that Jews must still follow the Mosaic law?
3
What's the justification for believing that God interacts with us today the same way He did thousands of years ago?
6
In Reformed Covenant Theology, why does the covenant sign of circumcision pass away but the Abrahamic covenant of which it was the sign of does not?
6
How do Covenant Theologians explain the Noahic covenant?