Can a priest say Mass for himself?

May not get a response in time but our pastor's first name is Joseph and I was wondering on the Feast of St. Joseph the worker, May 1st, can we request our pastor to offer the Mass intention in his own honor on his name's feast day, since his name is Joseph, ie, would a priest in his humility refuse to offer a Mass for himself?

May a priest say Mass for himself?

There is nothing forbidding such a thing. Personally, I would recommend this. Priests must sanctify themselves and the Holy Sacrifice of the Mass is, as Pope St. Paul VI said, the Mass is the apex of our faith. Priests may say the Mass intention for themselves.

There is nothing to prevent a priest from offering a Mass for himself at the request of one of the faithful.

In the Tridentine Rite, priest are permitted to added prayers (collects) to the Mass they say each day for various reasons and/or occasions that may arise here and there. For example a priest may add the collects for the time of pestilence to the Mass he is saying, regardless if it is a Feast Day or not. One of the collects a priest may add to his Mass is For the Priest Himself (Missae Pro Seipso Sacerdote)!

The following example of several collects of the Mass, including the Missae Pro Seipso Sacerdote prayers can been seen on page 463. 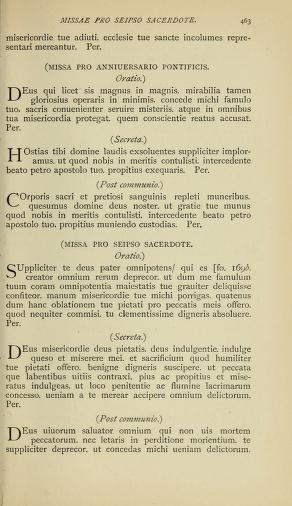 In other words, John, go for it! It is totally permitted in either Rite.

Not the answer you're looking for? Browse other questions tagged catholicism liturgy mass mass-intentions .

2
How is the idea of the ritual purity implemented in the Catholic Church?

3
Can a Uniate (Eastern) Catholic priest celebrate the Mass according to the Latin Rite?
4
What Prayer/words are associated with the solemn sign of the cross?
4
Can a priest add his own prayers to the Mass after the dismissal?
4
What is the purpose of offering a mass for someone?
7
Can a priest validly celebrate a mass without anybody else present?
1
According to Catholicism, is it permitted for a priest to employ the Benedictio Deprecatoris prayer to stop the spread of the coronavirus?
4
Can the gloria and sanctus be replaced at the Mass with some other hymn or song?
5
Why is there not a Liturgical Feast in honour of the Father within the Catholic Church?
3
Is there more than one High Priest in the order of Melchizedek?