We see at Matt 27: 64-66 the Chief Priests and Pharisees getting permission to secure the tomb of Jesus :

"....Therefore command the tomb to be made secure until the third day; otherwise his disciples may go and steal him away, and tell the people, ‘He has been raised from the dead,’ and the last deception would be worse than the first.” Pilate said to them, “You have a guard of soldiers; go, make it as secure as you can.” So they went with the guard and made the tomb secure by sealing the stone. ""

In the account of Mark at 16:1-4, we get the narration of women disciples visiting the tomb of Jesus :

"When the sabbath was over, Mary Magdalene, and Mary the mother of James, and Salome bought spices, so that they might go and anoint him. And very early on the first day of the week, when the sun had risen, they went to the tomb. They had been saying to one another, “Who will roll away the stone for us from the entrance to the tomb?” When they looked up, they saw that the stone, which was very large, had already been rolled back"

There is no mention of the `seal'which the High Priests and Pharisees put on the tomb of Jesus , in Mark's account which only mentions the large stone. One therefore, is left to presume that what Matthew meant by ``seal' is only the large stone which was guarded by soldiers, and that the preceding day of Resurrection having been the Sabbath day, nobody would have moved the stone in order to anoint the body of Jesus. My question therefore, is: How does the Catholic Church narrate the seal which was put on the tomb of Jesus ?

The Catholic Church, like many other denominations, relies on archeological evidence to explain this matter. 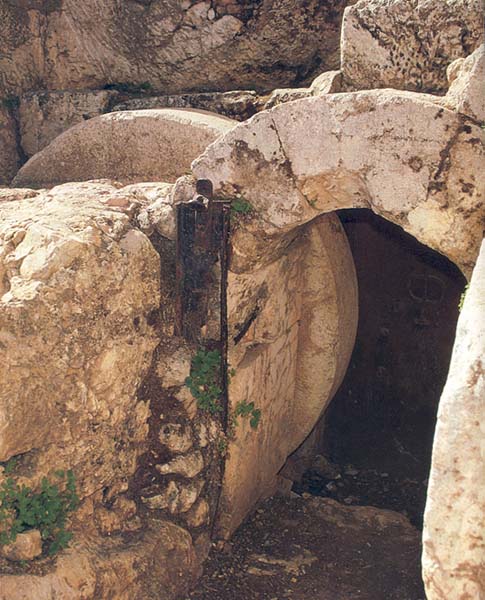 The stone itself sealed the tomb!

Mark 15:46 reads, “Then Joseph bought a linen cloth, and taking down the body, wrapped it in the linen cloth, and laid it in a tomb that had been hewn out of the rock. He then rolled a stone against the door of the tomb” (NRSV). The Greek verb used in the last sentence of this passage is proskulisas. Von Wahlde says, “This is a combination of pros (meaning ‘toward’) and the past participle of kulio (meaning ‘to roll or roll along’).”

Mark 16:3 describes the scene on Easter Sunday when Mary Magdalene, Mary the mother of James and Salome visit Jesus’ tomb: “They had been saying to one another, ‘Who will roll away the stone for us from the entrance to the tomb?’” The Greek word for “roll away” is apekulisen, which von Wahlde explains is “a combination of ap’ (meaning ‘away’) and … yes, kulio (meaning ‘to roll’).”

The Gospels of Matthew and Luke use similar compounds of the verb kulio. Thus, all of these accounts imply that the stone sealing Jesus’ tomb was rolled. - How Was Jesus’ Tomb Sealed?

More information about this topic is available with the following articles:

Not the answer you're looking for? Browse other questions tagged catholicism life-of-jesus gospels resurrection tomb-of-jesus .

12
How can these inconsistencies about Jesus' tomb be explained?
11
Where was Jesus' tomb?
0
Does the delayed burial of Jesus attest to the fact that he had no close relatives other than his mother?
1
According to Catholic Church, did Jesus belong to the Essenes sect of Judaism?