Should a priest refuse communion to the inappropriately dressed woman when she approaches to receive it?

Should a priest refuse communion to the inappropriately dressed woman when she approaches to receive? For example, a woman comes dressed with a short dress or bare shoulders in the church, and she goes to receive communion; should the priest refuse the communion on the account of the scandal she is causing? I am interested in the Catholic viewpoint.

Should a priest refuse communion to an inappropriately dressed man or woman when they approach to receive it?

That will all depend on the particular circumstances involved. I included men in my response because both sexes can be equally modest in dress and can be also guilty of dressing immodestly.

Before going with my response hear, I will admit that the Vatican has at one point published at proper dress code which I remember reading. What I do recall about it, is the simple fact the level was so high that even the most modestly dressed Catholics would be taken aback. Times have changed drastically in the manners of how people dress in modern times.

Culture plays it’s part in this to. For example, it is not deemed inappropriate in Middle East churches, for a woman to breastfeed an infant while at Mass. In some countries this is somewhat frowned on. However Pope Francis sees no problem with it.

"Babies have their own dialect," he added. "If one starts to cry the others will follow, like in an orchestra." He said that if the babies were "starting a concert" of crying because they were hungry, mothers should "go ahead and feed them," for this too is a "language of love."

There are signs all around St. Peter’s Square explaining the expected dress code when visiting the Vatican. Having visited the Vatican in person I can say that the Swiss Guards are very vigilant in enforcing the dress code on visitors. 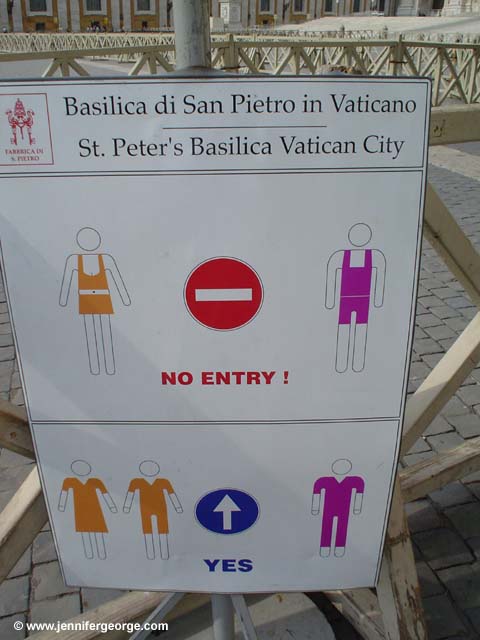 The above Vatican sign shows the dress code of both men and women!

As we see in the above pictographs that even men and boys must not wear short. However in some cultures this is not considered an inappropriate dress code at all. Scouts in France will attend Mass in shorts, whether they attend the New Mass or the Old Mass. Having lived in France for over ten years, I can attest to this fact.

There is a Benedictine Monastery about 10 Kilometres from where I presently live and on the doors of the abbey church there is the exact same signage as what is posted at the Vatican a being the standard that the monks desire as a dress code for the faithful to enter the church.

That said, it occasionally happens that some visitors enter into the church with what is considered inappropriate dress. At communion time, I have never seen any priest refusing to give communion to a visitor, uniquely because they were deemed inappropriately dressed. I have seen some of the priests refuse to give communion to someone when the communicant displayed signs that they were not Catholic and have no idea on how to receive Holy Communion, but never for not following the dress code!

In general, a priest will not refuse communion to a communicant simply because they are somewhat inappropriately dressed according to the standards of their cultures. However, if one were to come down the communion isle in his or her Adam’s suit, I imagine a priest would definitely refuse to allow the communicant to receive Holy Communion.

If a priest thinks he see someone inappropriately dressed at communion time, he should not refuse communion to the individual, but rather explain what is wrong with their clothing attire after Mass and in private as to avoid any real scandal in the future. Some people simply do not understand such things.

Once again, if we were to go by the standards of the Vatican in the 1930’s, many of us today would be deemed as being underdressed, especially in the hot summer months.

Now taking all the above into consideration, we should make a distinction between inappropriate and immodest dress in respect to women’s and girl’s dress. Pope Pius XI has stated that a woman or girl who ”wear immodest clothes are to be prohibited from Holy Communion and from the office of sponsor in the sacraments of Baptism and Confirmation, and in certain cases, they are to be prohibited even from entry into the church.“ Thus according to Pope Pius XI, priests should normally refuse to give communion to such individuals if truly dress immodestly. (How the Vatican reacts to dress in our days has certainly changed as we are aware at any televised Papal Mass bares out.)

THE MARYLIKE STANDARDS FOR MODESTY IN DRESS

“A dress cannot be called decent which is cut deeper than two fingers breadth under the pit of the throat; which does not cover the arms at least to the elbows; and scarcely reaches a bit beyond the knees. Furthermore, dresses of transparent materials are improper.” (The Cardinal Vicar of Pope Pius XI).

Here we must walk a fine line, for if a genuine scandal were to exist, then yes, priests should refuse to give communion to either a male or female who is immodestly dressed. Remember too, that these are guidelines that many would deem outdated. After all Pope Pius XI did say that “‘jeans’ are not to be worn to church.”

In my seminary days this point was part of the dress code for all seminarians, but it did not apply to the faithful on Sunday Mass (1980’s). Many wore jeans to Mass and so so did young girls and women. If guess it was a question of what was considered appropriate over inappropriate rather than what was considered immodest in dress.

Let the theologians figure out the nuances and I will do my best to be both appropriate and modest in my dress at Mass.

Not the answer you're looking for? Browse other questions tagged catholicism communion morality women clothing .

11
In light of the fact that Donatism is heresy, why do most churches require a priest to bless the elements?
8
At what age should my daughters start wearing a head covering when they pray?
5
Is a Catholic "blessing of a marriage" not a wedding?
0
When should we not receive holy communion?
6
Catholic restricted from Communion
5
It Still Confuses Me: Who can receive Communion where (Catholic/Orthodox)?
3
Can the faithful receive Holy Communion on repenting after committing a grave sin?
6
Is a Roman Catholic allowed by Church law to receive sacraments from other Churches in full communion with Rome?
0
How do priests judge who they can distribute Communion to?