Were Jesus’ hands tied on the way to Calvary?

Traditions say that Jesus fell three times under the weight of the cross, out of which two instances took place after Simon of Cyrene had been entrusted to help Him carry the cross. One wonders whether Jesus had been hand-cuffed on the way to Calvary , on account of which He was not able to balance the weight of the cross over His shoulder. My question therefore is: Do the teachings of Catholic Church indicate that Jesus was hand-cuffed on the way to Calvary ?

Was Jesus tied to the patibulum on the way to Calvary?

It is quite possible that Christ was tied to the patibulum or crossbar of his Cross, but the Catholic Church has no official stance on this subject. The Church has no traditions of such things being done to Jesus during his Passion.

Some might say that victims to be crucified were so weak after their scourging that there would be no reason to tie the condemned to their patibulums.

Some Catholic sources claim that yes victims were indeed tied to their crossbar, but the Church has no official pronouncements on it.

The upright part of the cross (the stipe) was permanently mounted in the crucifixion area. The part that the victim carried was the cross bar, weighing in at 75 to 125 pounds. The cross bar would be balanced on the victims shoulders, and their arms would be tied to the crossbar. In this position, if the victim tripped or fell, they could not use their arms to break their fall, and they would likely fall face first into the ground.

The victim was escorted by a Roman guard (probably a centurion and several soldiers), who were responsible for guarding the victim until his death. One of the soldiers would display a sign with the crime written on it. 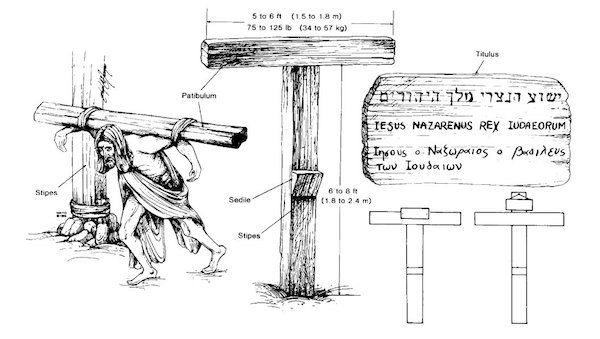 8
Did Jesus ascend to Heaven twice?
3
How does the Catholic Church interpret Galatians 2:7?
7
How much did the Cross of Jesus weigh?
4
Why did Joseph and Mary take one day's time to realize that Jesus had been left behind at the Temple?
3
Is there any biblical basis for the Church to depict Jesus as a European or some other ethnic race?
0
According to Catholicism, did Jesus really use wine at the Last Supper?
2
What is the biblical basis that Jesus could not sin?
0
Does the delayed burial of Jesus attest to the fact that he had no close relatives other than his mother?
7
What is the basis for Catholics believing Jesus fell three times (or seven) on his journey to Calvary?