Could Jesus’ appearing before Pilate, Herod, and scourging happen in 3 hours?

Can John's Passion chronology be reconciled with that of the Synoptics?

It seems most reasonable to me. Yet I am still left with the question how could Jesus appear before Pilate twice and also Herod and also be scourged and also carry His cross between 6 am and 9 am?

Could Jesus’ appearing before Pilate, Herod, and scourging happen in 3 hours?

Historically speaking, it could be possible, but it is doubted by many.

The crucifixion of Jesus occurred in 1st-century Judea, most likely April 7, 30 AD or April 3, 33 AD. Jesus' crucifixion is described in the four canonical gospels, referred to in the New Testament epistles, attested to by other ancient sources, and is established as a historical event confirmed by non-Christian sources. There is no consensus among historians on the exact details.

According to Mark's Gospel, he endured the torment of crucifixion from the third hour, (between approximately 9 am and 3 pm).

The Crucifixion of Jesus

21 A certain man from Cyrene, Simon, the father of Alexander and Rufus, was passing by on his way in from the country, and they forced him to carry the cross. 22 They brought Jesus to the place called Golgotha (which means “the place of the skull”). 23 Then they offered him wine mixed with myrrh, but he did not take it. 24 And they crucified him. Dividing up his clothes, they cast lots to see what each would get.

25 It was nine in the morning when they crucified him. 26 The written notice of the charge against him read: the king of the jews.

27 They crucified two rebels with him, one on his right and one on his left. [28] [a] 29 Those who passed by hurled insults at him, shaking their heads and saying, “So! You who are going to destroy the temple and build it in three days, 30 come down from the cross and save yourself!” 31 In the same way the chief priests and the teachers of the law mocked him among themselves. “He saved others,” they said, “but he can’t save himself! 32 Let this Messiah, this king of Israel, come down now from the cross, that we may see and believe.” Those crucified with him also heaped insults on him.

The Death of Jesus

There are several details that are only mentioned in a single gospel account. For instance, only Matthew's gospel mentions an earthquake, resurrected saints who went to the city and that Roman soldiers were assigned to guard the tomb, while Mark is the only one to state the time of the crucifixion (the third hour, or 9 am - although it was probably as late as noon) and the centurion's report of Jesus' death. The Gospel of Luke's unique contributions to the narrative include Jesus' words to the women who were mourning, one criminal's rebuke of the other, the reaction of the multitudes who left "beating their breasts", and the women preparing spices and ointments before resting on the Sabbath. John is also the only one to refer to the request that the legs be broken and the soldier's subsequent piercing of Jesus' side (as fulfillment of Old Testament prophecy), as well as that Nicodemus assisted Joseph with burial.

Of all the Apostles of Our Lord, only St. John witnessed Jesus’ actual Crucifixion, thus his time frame may possibly be the most accurate. According to the Apostle St. John, Jesus was crucified at about noon.

13 When Pilate therefore heard that saying, he brought Jesus forth, and sat down in the judgment seat in a place that is called the Pavement, but in the Hebrew, Gabbatha.

14 And it was the preparation of the passover, and about the sixth hour: and he saith unto the Jews, Behold your King!

15 But they cried out, Away with him, away with him, crucify him. Pilate saith unto them, Shall I crucify your King? The chief priests answered, We have no king but Caesar.

16 Then delivered he him therefore unto them to be crucified. And they took Jesus, and led him away.

17 And he bearing his cross went forth into a place called the place of a skull, which is called in the Hebrew Golgotha:

18 Where they crucified him, and two other with him, on either side one, and Jesus in the midst.

19 And Pilate wrote a title, and put it on the cross. And the writing was Jesus Of Nazareth The King Of The Jews.

20 This title then read many of the Jews: for the place where Jesus was crucified was nigh to the city: and it was written in Hebrew, and Greek, and Latin. - John 19: 13-20

In any case, a nine AM time frame for the Crucifixion of Jesus is still physically possible.

Annas and Caiaphas either occupied separate apartments in one building or had separate houses that shared one courtyard. (Compare John 18:12-27; Mark 14:53-72; Luke 22:54-71) Assuming this was near the Temple it was about 500 metres or five minutes walk from Gethsemene.

Governor Pontius Pilate lived at Caesarea on the coast but went to Jerusalem during major festivals. The Antonia Fortress stood next to the Temple. But Pilate probably did not stay there but rather in the palace of Herod Antipas. (John 18:28) Herod was ruler of Galilee and had a palace in Jerusalem and was there at the time.

Herod's palace was about 400 metres or 4 minutes walk from the Temple.

The questioning of Jesus by Pilate could fit into half an hour, and by Herod less. Time is saved if messengers went ahead to announce Jesus was being brought.

Whipping and mocking Jesus would require only minutes, perhaps 20. The cross or "tree" would have been ready-made rather than require felling while everyone waited.

The total distance from Gethsemane to the Crucifixion was about 1½ kilometres. - No Time or Distance Problem 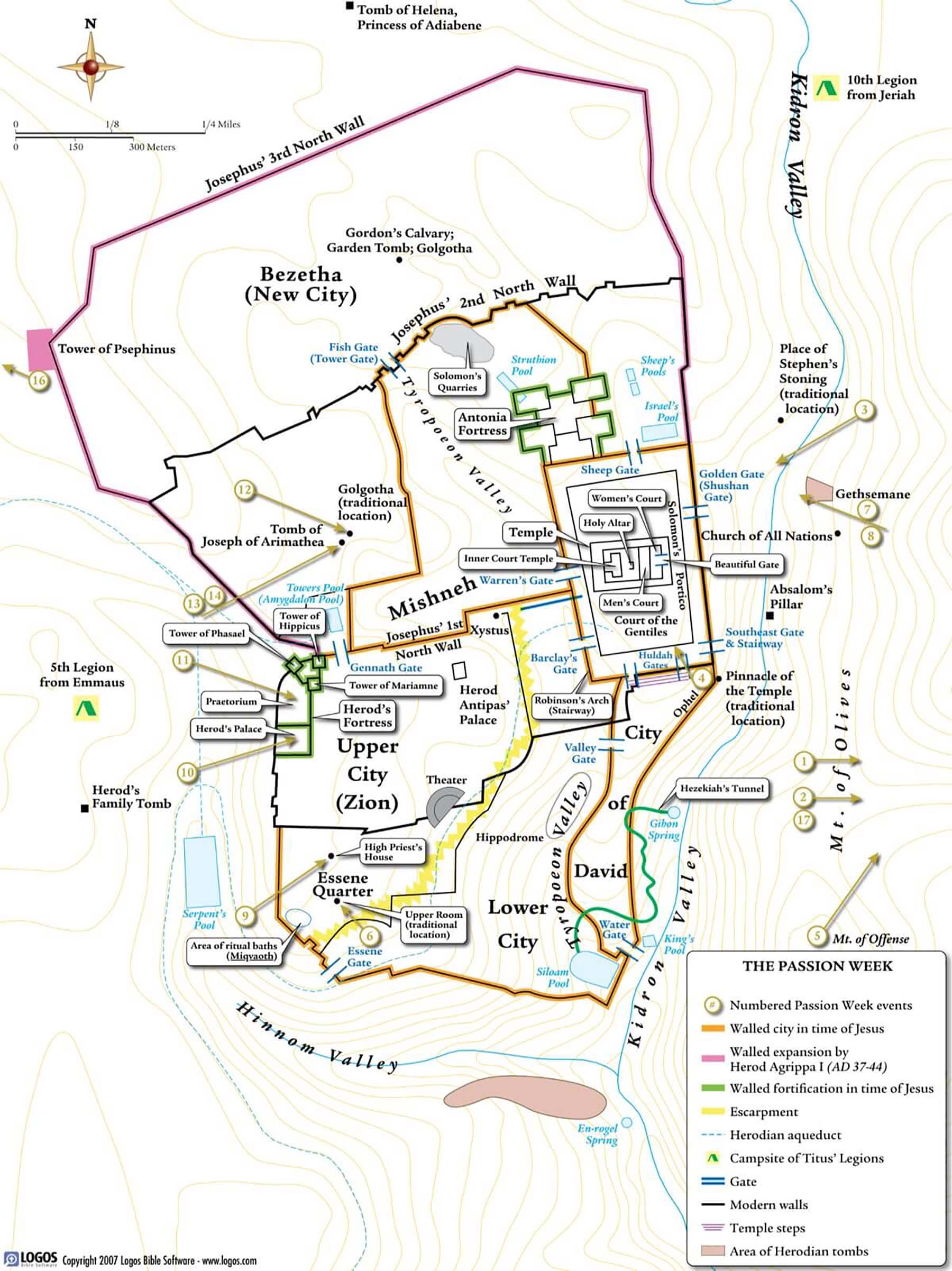 Jerusalem at the Time of Jesus, 33 AD

Not the answer you're looking for? Browse other questions tagged life-of-jesus crucifixion textual-discrepancies chronology pilate or ask your own question.

25
How could Jesus be born during the reign of Herod, and when Quirinius was governor of Syria, if those periods were not contemporary?
4
Are there designated circumstances for making prayer to Jesus and making prayer to God?
16
Does Catholic doctrine teach that the Incarnation would have taken place regardless of Adam's decision?
5
Did Jesus visit the temple before the wise men came?
2
Do Matthew and John have a discrepancy with regards to Jesus before Pilate?
3
When did Judas Iscariot kill himself?
3
Is there any significance to the aside in Luke 23:12, regarding Pilate and Herod?
7
What is the earliest reference to the notion that we killed Jesus?
2
How does Jesus have two wills in light of the rejection of Nestorianism? (Orthodox Trinitarian view)