Does “Q” elucidate the “synoptic problem”?

Mainstream scholarship widely supports the view that the authors of Matthew and Luke shared a common source, since lost, in contemporary discourse called "Q".

Yet it is easily plausible that the common source between them is simply whichever of them occurred first, such as to be then used by the other.

Indeed, the synoptic "problem" appears easy to resolve through the proposal that Mark appeared first, followed by Matthew, which referred to Mark, and that Matthew was in turn followed by Luke, which referred to both predecessors. Such a proposal is offered here not definitely to reject other possibilities, only to suggest that the supposed "problem" might not accurately be portrayed as a serious or difficult dilemma.

(The Mark-Matt-Luke chronology with maximal dependency among them and no shared extinct source is known as the Farrer-Goulder Hypothesis.)

Why are the contrasted features of the three texts argued to be problematic, and why do so many suggest that Q provides the best available solution?

I appreciate the link to the article by Peter Kirby. Although I cannot evaluate how much it is representative of the wider scholarship, it is certainly more concise, precise, and directed than the other summary accounts I have seen.

Unfortunately, I fail to be persuaded, though I welcome further commentary that might clarify the steel-man representation, that is, the most compelling possible argument, for the position.

I would share my thoughts on the Kirby summary:

Proponents of the Q theory would say that none of the alternatives provide an adequate explanation of all of the parallel passages in the synoptics. Leaving to the side any of the non-Markan-Priority theories (as they are even more minority views than Q-less views), you're left with basically two options without Q: Matthew used Luke, or Luke used Matthew. Proponents of Q would say there are substantial problems with either model.

One example from An Introduction to the New Testament by Carson and Moo concerns the order of events in the gospels. They give this table on page 89: 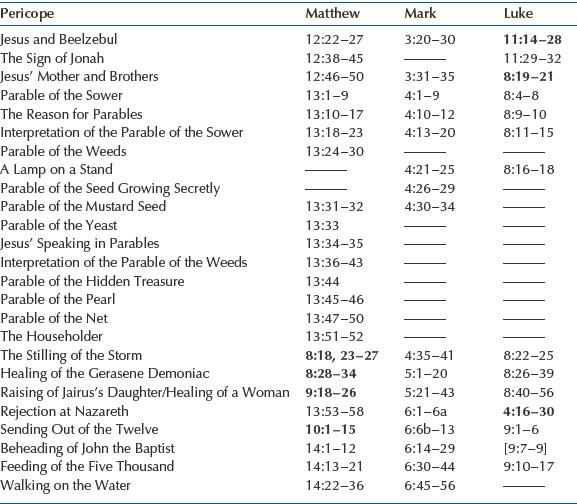 Note that Matthew and Mark agree, against Luke, in placing the accusation that Jesus casts out demons in the name of Beelzebul just before the so-called parables of the kingdom; and Luke and Mark agree, against Matthew, in putting the stilling of the storm and the healing of Gerasene demoniac just after these parables. At no point, however, do Matthew and Luke agree against Mark. To put it another way, at no point does Mark follow an order that disagrees with the other two (hence the lack of any bold type in the Mark column.) (page 92)

For another example, consider the Sermon on the Mount (Matthew 5-7) and the Sermon on the Plains (Luke 6:17-49). There is lots of overlap here, which is not shared with Mark, and yet there are significant differences that would be hard to explain if one of the Gospels had simply used the other. The two texts are easier to explain by them both using a shared source, editing and expanding it to serve the different purposes each had in writing their gospel. (For example Matthew wants to show Jesus's relationship to the Jewish Law far more than Luke does.)

First up, the blessings in Matthew 5:3-12 and Luke 6:20-26. Matthew has a longer passage, with Luke only using half of the blessings. But Luke then has four woes which are not in Matthew. There are also several vocabulary differences so it's not the case that one simply copied the other, leaving out some verses.

Luke's passage on loving your enemies (6:27-36) is similar to Matthew 5:38-48, but there are many differences, and they have similar things in different orders. I've coloured the similar verses myself here. Note that each gospel has places where they are longer than the other. And Luke includes the golden rule here while Matthew has it later in 7:12. There's no simple way to explain one gospel using the other, as it would have to simultaneously condense and expand it. But if Q had only the shared parts I coloured, then it's easier to explain each gospel expanding upon it, no condensing needed. 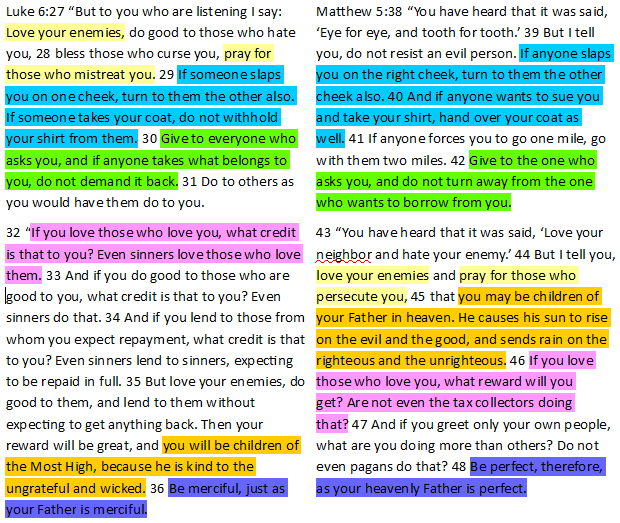 Another noticeable difference is the passages on judging others: Matthew 7:15 and Luke 6:37-41. Although Luke's Sermon on the Plains is much shorter overall, here Luke is quite a lot longer. Luke's parable of the blind leading the blind is found elsewhere in Matthew 15:14, and the first part of Luke 6:38, "Give, and it will be given to you. A good measure, pressed down, shaken together and running over, will be poured into your lap." is not found anywhere in Matthew.

This page by Peter Kirby covers better than I can many of the arguments for Luke's independence of Matthew, ie, that he didn't know of or have a copy of Matthew when he wrote his gospel.

Not the answer you're looking for? Browse other questions tagged gospel-of-matthew gospel-of-luke synoptic-problem or ask your own question.

4
Where did the disciples meet Jesus after the resurrection?
8
Has the Catholic Church responded to the apparent implausibility of a census as described in Luke?
5
Do any church fathers interpret Luke 18:17 as teaching the necessity of infant baptism?
0
How does Luke target gentiles in the New Testament?
3
Are Matthew, Mark and Luke the same book in different version?