How much did Paul's travels cost?

The Apostle Paul famously made an extensive series of missionary journeys around the eastern Mediterranean (in various company, and stopping off in some places for months or years, also getting shipwrecked at one point). These are described in Acts and in the letters.

I am curious about the rough financial cost of these travels, in terms of the means of typical first-century people. Basically, how wealthy would you have to be in order to make these trips (assuming you're paying for it all yourself)? How much support might therefore have been required from other Christians in order to finance the voyages?

I'm not after exact numbers - just an estimate of where these trips fall on the scale of "Paul could easily have paid for the whole thing out of his own money" to "this was a major outlay for the whole church community". 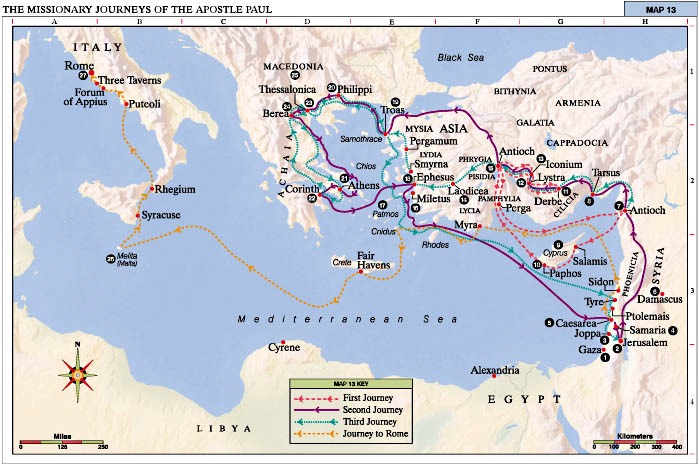 Searching the web I came across this fascinating site which allows you to enter a route and it will calculate the cost of freight and passenger transport as it was in Roman times along that route.

For example entering Antioch to Ephesus, and forcing a land route, gives you a cost of around 30 denarii to ship 1kg of wheat, and 1500 denarii for a passenger in a carriage! Remembering that a denarius is about a day's wages for a peasant, this is a not inconsiderable cost. Shipping is noticeably cheaper than land transport, and I'm guessing Paul travelled more cheaply than a passenger in a carriage, but even 50kg of wheat would cost 1500 denarii - a considerable sacrifice for those who sent him.

Here's a Jewish biography of Paul, known to the Jews as Saul of Tarsus. As you might imagine, it's not very complementary.

Here's what we know.

Here's what we can deduce.

I suspect that the local Christian churches supported Paul's missionary travels, by providing meals and lodging while he preached.

Edited to add: I don't think there was much difference between a tent maker and a sail maker in the first century. Perhaps, Paul was able to sail by trading sail making or repair for the voyage.

Alan Millard says in Discoveries from the Time of Jesus, page 72, that the silver denarius, equal to the Greek drachma, was a good day's wage, which means only the wealthy could afford a trip costing hundreds, or even thousands of denarii. If Acts 18:3 is correct in describing Paul as a tentmaker, he would have been among the very poor of society. This is quite at odds with his literacy skills, since such a well-educated man would be described in terms of a higher and more lucrative vocation. We will consider the possibility that Acts is wrong in describing Paul as a tentmaker, because Bart D. Ehrman says in Forged, page 208, that the author seems to be far too poorly informed about Paul's theology and missionary activities to have been someone with firsthand knowledge.

Paul's epistles show Paul not only to be able to write well, but to have a good knowledge of the Septuagint (LXX) scriptures used by diaspora Jews and a knowledge of Greek culture. Stanley E. Porter says in 'Paul and His Bible: His Education and Access to the Scriptures of Israel', published in As it is Written, page 104, that recent rhetorical studies of Paul's letters attribute to him the ability to use a number of stylistic characteristics that were commonly taught in the grammar school curriculum of Greece. With a grammar school education, he was able to earn a comfortable living and could have afforded to travel on his own account. In Philemon 18, Paul appears ready to recompense Philemon for any damage that Onesimus had done when he ran away, with a confidence that suggests a substantial financial capacity:

Philemon 18: If he hath wronged thee, or oweth thee ought, put that on mine account;

The "poor ones" of Jerusalem (cf Galatians 2:10) were probably unable to assist Paul in undertaking these extensive travels and Paul had not yet established his Christian communities around the eastern Mediterranean, but he could perhaps have undertaken them on his own account while taking occasional work as a scribe, tutor or in some other professional role.

Having established a plausible financial capacity to fund Paul's three missionary journeys described in Acts, we should be able to dismiss doubts based on expense. The question moves on to whether he did in fact undertake these journeys. Raymond E. Brown says in An Introduction to the New Testament, page 433-436, the three journeys are only a convenient classification developed by students of Acts. He says that Paul gives us no information about the first missionary journey in his undisputed letters, and that the itinerary of the third journey has also been called into doubt by some scholars. Finally, since there is no confirmation in the undisputed (or even the pseudonymous) Pauline letters of the appeal to Caesar and the journey to Rome, Brown says that some dismiss the account of Paul's hazardous sea journey in Acts 27:1-28:14 as novelistic fiction.

Certainly the journeys described in Acts of the Apostles would have been far outside the capacity of the church so recently established in Jerusalem, especially as there was no assurance that this new convert to Christianity would be at all successful in winning long-term converts. According to Acts 9:20-25, Paul had already been noticeably unsuccessful in Damascus, having to be rescued down the wall in a basket, then in Caesarea (Acts 9:29), yet he was soon sent to Antioch, Seleucia and elsewhere on the first Missionary Journey.

As a tentmaker, Paul might have been able to earn some sustenance in his travels, but he certainly could not have contributed to the cost of sea voyages. However, if Acts is wrong in so describing Paul, then the evidence of his grammar school education means he might have been able to pay for these journeys. Since some New Testament scholars seriously doubt whether Paul ever undertook the three missionary journeys described by Acts, he might not have needed to finance them. His own epistles describe journeys that were chiefly undertaken on land, and in many cases possibly on foot.

Not the answer you're looking for? Browse other questions tagged history paul-apostle acts economics .

15
Did Paul write other letters that are not in the Bible?
2
What is known about the Apostle Paul's family?
6
What arguments have been offered as to how Christianity is incompatible with a system of forced collectivism?
6
Did the early Church fathers see a distinction between Matthias' and Paul's apostleship appointment, considering Paul's peculiar verbiage choice?
1
Was Paul's Relationship with Jewish Leadership Close Enough to Act as Their Agent?
5
How did Paul learn the gospel?
3
How effective is Christian outreach and how much does it cost?