What did Catholics do to ease the time and maintain hope during historical pestilences such as the Black Plague?

What did Catholics (and other Christians, if applicable) do to ease the time of historical pestilences such as the Black Plague (1347 to 1351), especially in quarantine areas?

I can imagine that Christians prayed for the end of the pestilence, but did they do any other things to make the time pass by more easily?

Perhaps learning from the past, we can learn a few things for dealing with our present situation with the coronavirus-19!

At the end of the 6th century, a severe plague ravaged the city of Rome, even claiming the life of Pope Pelagius II. It was a difficult time for the people of the city, and when Pope Gregory I was elected to lead the Church, he immediately set out to call upon the mercy of God.

St. Gregory the Great (as he would later be known) organized a massive procession around the city, inviting everyone to pray to God that the plague would be lifted. The Golden Legend narrates how the procession was led by an ancient image of the Virgin Mary, reportedly cleansing the air of disease.

The Roman Plague of 590 a local plague that affected the city of Rome in the year 590. It followed from the great plague of Justinian that may have killed more than 100 million Europeans2 that began in the 540s and spread to other parts of the world.

During the plague, the bishop of Rome Pelagius II died and Gregory the Great was elected his successor. Gregory had previously served as a kind of papal ambassador called an apocrisiarius to the Byzantine court where he had likely been influenced by Byzantine practices. Constantinople, which was consecrated to the protection of the Mother of God (Theotokos) had a practice whereby processions would be done through city streets of masses of the faithful that would chant psalms and kyrie eleison to console God's wrath. Gregory had likely seen these many times during his stay in Constantinople.

When the plague was in Rome in 590 and Gregory was still a deacon, he organized such a procession to take place in Rome wherein seven groups would hold processions through the streets of the city and ending at the basilica of Mary Major to ask for the Virgin's Mary protection. This was perhaps unusual at the time, since Rome was traditionally associated with St Peter's protection, but it may have been a result of Byzantine influence, since Constantinople was often put under Mary's protection during times of crisis.

The seven processional groups were: 1) clergy, 2) abbots and monks, 3) abbesses and nuns, 4) men 5) married women 6) widows and 7) children.(also perhaps including the poor of Rome)

The reason for the processions was because plagues and other national disasters were typically interpreted at the time as being the chastisement of God for sinfulness, and therefore to appease God's wrath, these measures were taken. Eighty people collapsed during the processions as a result of being infected by plague. St Michael the Archangel supposedly appeared with a flaming sword standing on top of Hadrian's Mausoluem (which is today known as Castel Sant'Angelo precisely because of this story) and he sheathed it when the procession approached, which was interpreted to signify that God's wrath had been turned back, and the plague supposedly stopped at that moment, following which the faithful thanked the Mother of God.

Up until 1967, the Processions on the Feast of St. Mark were held on April 25th each year! The Catholic Encyclopedia has the following to sat on Rogation Days

In the Golden Legend, Jacobus de Varagine pens the following about St. Gregory I and the Roman Plague of 540:

And because the mortality ceased not, he ordained a procession, in the which he did do bear an image of our Lady, which, as is said, S. Luke the Evangelist made, which was a good painter, he had carved it and painted after the likeness of the glorious Virgin Mary. And anon the mortality ceased, and the air became pure and clear, and about the image was heard a voice of angels that sung this anthem: Regina cæli lætare, etc., and S. Gregory put thereto: Ora pro nobis, deum rogamus, alleluia. At the same time S. Gregory saw an angel upon a castle which made clean a sword all bloody, and put it into the sheath, and thereby S. Gregory understood that the pestilence of this mortality was passed, and after that it was called the Castle Angel. 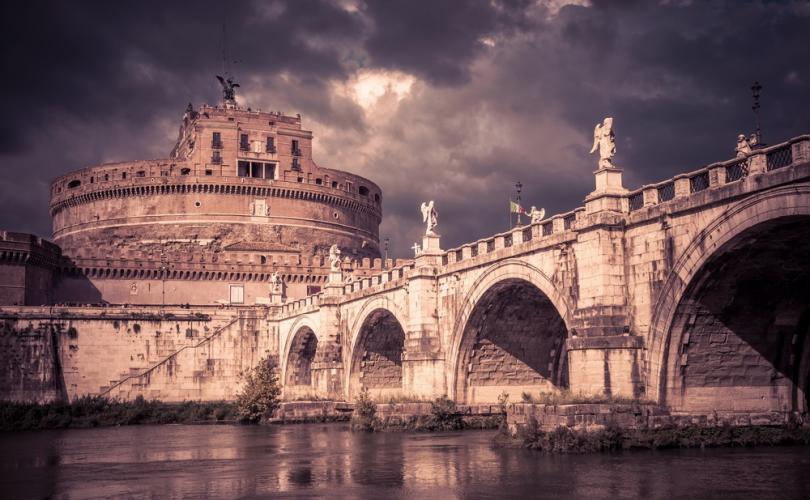 The liturgy for the Rogation Days, during which the priest is vested in purple, begins with Psalm 43:26 --"Arise, O Lord, help us and redeem us for Thy name's sake" -- which is followed by the Litany of the Saints. At the Litany's "Sancta Maria," all stand and a procession begins, which in older times was (and still is in rural areas) usually around the boundaries of the parish, giving to the procession the name of "beating the bounds."

During the Black Plague many Catholics added “pray for us now and at the hour of our death”.

The “Hail Mary” prayer that Christians have been praying for centuries is composed of two main parts. The first part of the prayer is derived from the Annunciation, when the angel Gabriel greeted Mary by saying, “Hail, full of grace, the Lord is with you!” (Luke 1:28) The next part of the prayer is taken from the Visitation, when Elizabeth greeted Mary with the words, “Blessed are you among women, and blessed is the fruit of your womb!” (Luke 1:42)

This second part (“Holy Mary, Mother of God, pray for us sinners now, and at the hour of our death”) is believed by many to have been added during the plague to ask for the Blessed Mother’s protection from the fatal disease.

Since it seizes upon the two decisive moments of life: “now” and “at the hour of our death,” it suggests the spontaneous outcry of people in a great calamity. The Black Death, which ravaged all Europe and wiped out one-third of its population, prompted the faithful to cry out to the Mother of Our Lord to protect them at a time when the present moment and death were almost one.

An expert in Marian devotion, Fr. Donald H. Calloway, confirms this conclusion in his book Champions of the Rosary and explains how, “After the Black Death, the second half of the Hail Mary began to appear in the breviaries of religious communities, especially those of the Mercedarians, Camaldolese, and Franciscans … the people of the 14th century greatly needed the ‘hope-filled’ dimension of the second half of the Hail Mary prayer.”

The prayer took various forms during this bleak period in Europe, but was officially recognized after the publication of the Catechism of the Council of Trent and the full prayer was then included in the Roman Breviary of 1568.

During times of great suffering, Christians have always turned to God and those saints closest to him, in hopes that he will bring relief to his people. - How the Black Plague changed the “Hail Mary” prayer

In 1633, the residents of Oberammergau, Bavaria, Germany, vowed that if God spared them from the bubonic plague ravaging the region, they would produce a play thereafter for all time every 10 years depicting the life and death of Jesus. Bavaria just happens to be where Pope Emeritus Benedict XVI is from!

Oberammergau Passion Play is a passion play performed since 1634 as a tradition by the inhabitants of the village of Oberammergau, Bavaria, Germany. It was written by Othmar Weis, J A Daisenberger, Otto Huber, Christian Stuckl, Rochus Dedler, Eugen Papst, Marcus Zwink, Ingrid H Shafer, and the inhabitants of Oberammergau, with music by Dedler. Since its first production it has been performed on open-air stages in the village. The text of the play is a composite of four distinct manuscripts dating from the 15th and 16th centuries.

The play is a staging of Jesus' passion, covering the short final period of his life from his visit to Jerusalem and leading to his execution by crucifixion.

In 1633, the residents of Oberammergau, Bavaria, Germany, vowed that if God spared them from the bubonic plague ravaging the region, they would produce a play thereafter for all time every 10 years depicting the life and death of Jesus. The death rate among adults had risen from one person per 1000 per year in October 1632 to twenty in the month of March 1633. After their vow, the adult death rate slowly subsided to one in the month of July 1633. The villagers believed they had been spared and thus kept their part of the vow when the play was first performed in 1634.

The play is now performed repeatedly over the course of five months during every year ending in zero. 102 performances took place from 15 May until 3 October 2010 and is next scheduled for 2020. (The 2020 play is being postponed to 2022 due to the outbreak of COVID-19.) The production involves over 2,000 performers, musicians and stage technicians, all residents of the village. The play comprises spoken dramatic text, musical and choral accompaniment and tableaux vivants, which are scenes from the Old Testament depicted for the audience by motionless actors accompanied by verbal description. These scenes are the basis for the typology, the interrelationship between the Old and New Testaments, of the play. They include a scene of King Ahasuerus rejecting Vashti in favor of Esther, the brothers selling Joseph into slavery in Egypt, and Moses raising up the nehushtan (bronze serpent) in the wilderness. Each scene precedes that section of the play that is considered to be prefigured by the scene. The three tableaux mentioned are presented to the audience as prefiguring Christianity superseding Judaism, Judas selling information on the location of Jesus, and the crucifixion of Jesus.

The evolution of the Passion Play was about the same as that of the Easter Play, originating in the ritual of the Latin Church, which prescribes, among other things, that the Gospel on Good Friday should be sung in parts divided among various persons. 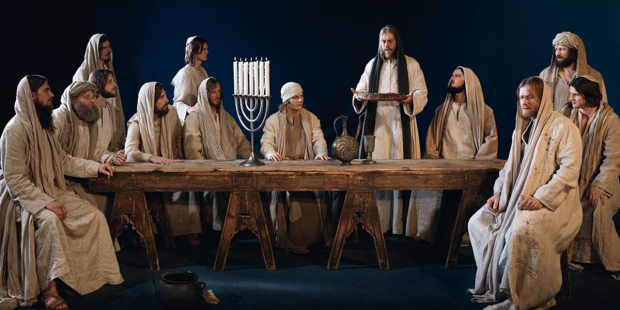 Not the answer you're looking for? Browse other questions tagged catholicism church-history tradition disease black-plague or ask your own question.

9
How long, and in what cases did Catholics participate in the Black Fast?
8
Did the Christian practice of having a prayer before Bible study evolve during Martin Luther's time?
15
Is there a historical reason why the liturgical colour purple eventually replaced black to symbolize penance?
17
How common were blasphemy accusations and trials among the Jews during the time of Jesus?
2
Was it possible for Catholics to express their faith openly in England during the time of persecution?
22
What have Christians taught during past plagues and pandemics?
1
How did Catholic Church adapt after the Black Plague in Europe if at all any adaptation occurred?