Benefits of Mass without a congregation

Bishops of all Catholic dioceses in Germany currently ban the public celebration of mass because of the Corona outbreak. In some European countries the general public is largely confined to their homes and houses.

In the current situation, it is the Church's mandate to bring people's concerns before God and to continue to be close to them spiritually. Can 906 CIC (Codex luris Canonici / Code of Canon Law) only requires the existence of a just and reasonable reason for the private celebration of the Eucharist of a priest, i.e. without the participation of any believer. Such a reason is given in the current exceptional situation, so that the priests can continue to celebrate the Holy Mass on behalf of the faithful, i.e. without the participation of believers and altar servers.

Can. 906 Except for a just and reasonable cause, a priest is not to celebrate the eucharistic sacrifice without the participation of at least some member of the faithful.

For this question I am not interested in benefits for the priest (who takes part in the liturgy, receives the Eucharist and so on) and I am not interested in reasons that could also be satisfied by some form of intercessory prayer (which might still be part of the celebrated mass). I am more interested in this specific case of mass being important to celebrate even if no congregation will participate.

The Holy Sacrifice of the Mass has intrinsic value, apart from the congregation.

A Mass without a congregation is called a private Mass (Missa privata), and it has just as much intrinsic value (valor intrinsecus) as a Mass with a congregation.

[I]n view of the infinite worth of Christ as the Victim and High Priest in one Person, the [Holy] sacrifice [of the Mass] must be regarded as of infinite value, just as the sacrifice of the Last Supper and that of the Cross.

Pius XII's 1947 encyclical on the liturgy, Mediator Dei, condemns the error that a congregation is necessary for a Mass:

This error that Pope Pius XII condemned found its way into the 1969 Institutio Generalis's Protestant-friendly definition of the Mass, which was subsequently corrected.

If any one saith, that masses, wherein the priest alone communicates sacramentally, are unlawful, and are, therefore, to be abrogated: let him be anathema.
Si quis dixerit, missas, in quibus solus sacerdos sacramentaliter communicat, illicitas esse ideoque abrogandas: anathema sit.

at side altars of

an Institute of Christ the King Catholic church in Tucson, Arizona, circa 2019 anno Domini: 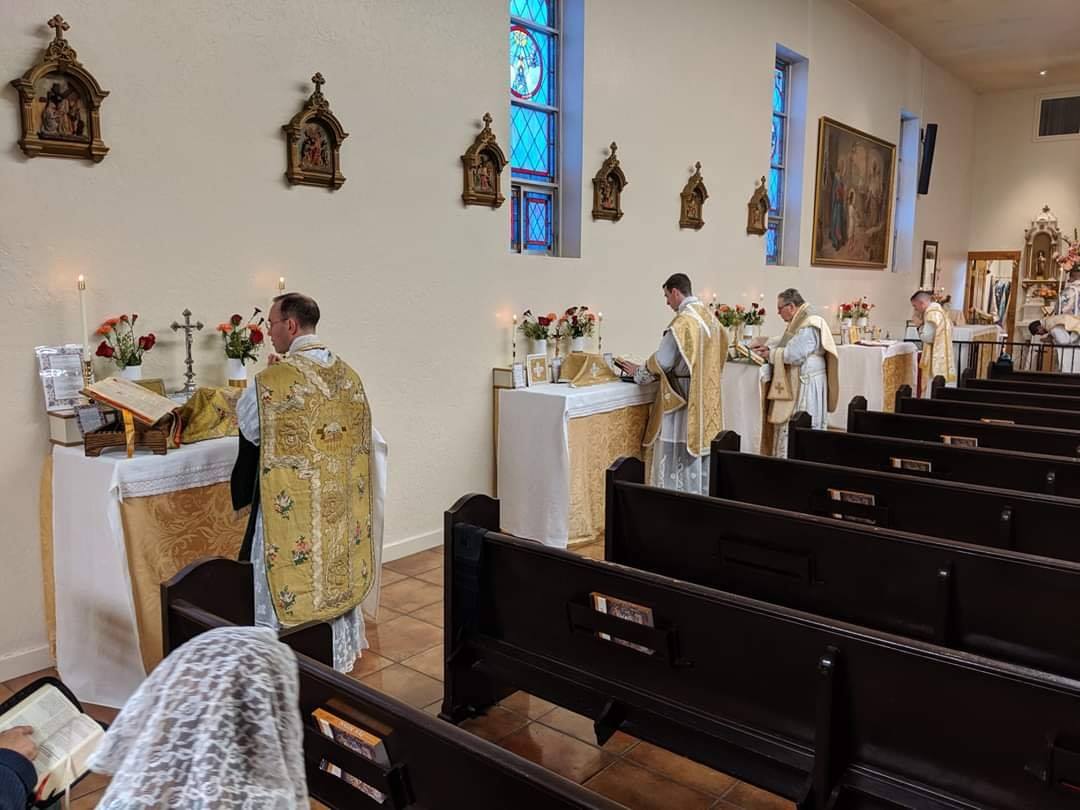 priests in a seminary: 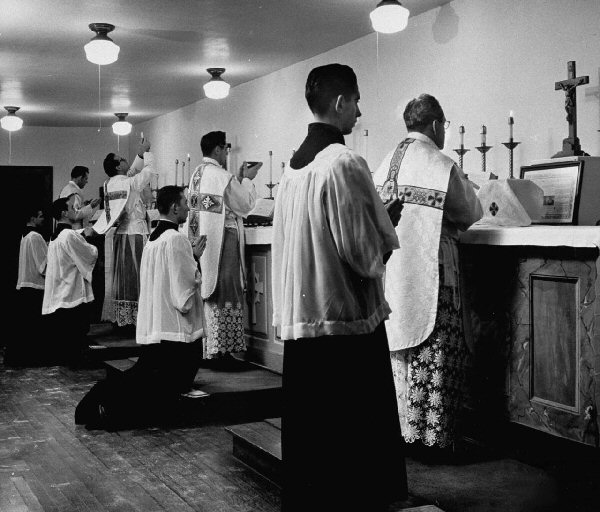 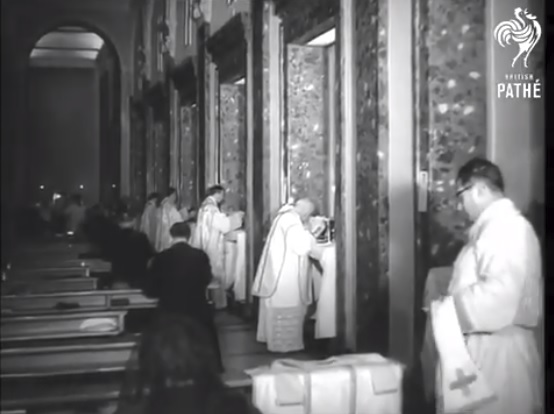 The Holy Sacrifice of the Mass is of infinite value before God, whether celebrated with a congregation or without a congregation.

The Infinite Value of the Holy Mass

The Holy Mass is the highest form of worship. It is the sacrifice of Calvary renewed. One Mass gives God more praise and thanksgiving and makes more atonement for sin and pleads more eloquently than does the combined eternal worship of all the souls in heaven, on earth and in purgatory. In the Holy Mass, it is Jesus Christ, God, as well as Man, who is our Intercessor, our Priest and our Victim. Being God – as well as Man – His prayers, merits and His offerings are infinite in value.

The Mass is the best means we have:

Other situations that historically have lead to priests or bishops saying Mass without any congregation or server at all, would be to isolation in prison (solitary imprisonment) because of their faith and being a missionary in lands where no faithful live.

Blessed Charles de Foucauld said Mass alone while in Algeria because of a lack of Catholic faithful in that country.

Charles received special Vatican permission to say Mass alone and to reserve the Eucharist in a tabernacle in his small hut. He worked on various projects with the twenty families who inhabited the nearby village, especially children, the aged, and the sick. The locals called him Marabout, or, "the holy one." - Charles de Foucauld: A life hidden with Christ

Cardinal Nguyen Van Thuan is an example of on saying Mass in private and alone in prison while being persecuted by communists.

Not the answer you're looking for? Browse other questions tagged catholicism mass .

5
Does the Catholic Church accept that in-person Mass is not an 'essential service'?
4
What is the purpose of offering a mass for someone?
4
Looking for a website providing HTML formatted works of Joseph Pohle's 12 volume Dogmatic Theology
3
Why do priests celebrate Mass versus populum (toward the congregation) at most Masses in the Ordinary Form?

12
Format for the Catholic Mass
6
Why are there differences in the "Greeting" of the Mass?
10
When does the obligation to attend Mass begin?
4
Funeral Mass vs. Mass for the Deceased
7
Can a priest validly celebrate a mass without anybody else present?
1
Under what conditions does the Catholic Church explicitly call the laity extraordinary ministers?
5
Why do Catholic persons not partake of mass every single day?
1
Is Sung Matins a form of mass?
0
Is it more Participatio Actuosa if the congregation hears the words of the Consecration?