What does the Catholic Church teach about the significance of reference to Jacob's Well at John 4:12?

We see the conversation of Jesus with the Samaritan woman at John 4: 10-12 :

"Jesus answered her, “If you knew the gift of God and who it is that asks you for a drink, you would have asked him and he would have given you living water.”

“Sir,” the woman said, “you have nothing to draw with and the well is deep. Where can you get this living water? Are you greater than our father Jacob, who gave us the well and drank from it himself, as did also his sons and his livestock?”

There is no mention in the Old Testament regarding inheritance of the well by Israel from Jacob, as is claimed by the Samaritan woman. But then, Jesus does not question her belief, and goes on to explain the significance of the water of eternal life. My question therefore is: What does the Catholic Church teach about the significance of reference to Jacob's well at John 4:12?

What does the Catholic Church teach about the significance of reference to Jacob's Well in John 4:12?

The Catholic Church does not place any particular significance to the reference of Jacob’s well in the Gospel of St. John. In fact we do not know for sure where the actual well existed.

Jacob’s well is only mentioned in John’s Gospel, so biblical information about it is quite limited. However, tradition and archaeology provide more detail about the well’s original owner and its location.

In chapter 4 of his Gospel, John recorded the story of Jesus talking with the Samaritan woman. Samaria was located in the northern half of the formerly united Israel, and Jesus was passing through it on His way from Judea to Galilee. Outside the town of Sychar, “Jacob’s well was there, and Jesus, tired as he was from the journey, sat down by the well” (John 4:6). He asked a woman to give Him something to drink from what she drew (John 4:7), and she wondered why a Jewish man would speak to a Samaritan woman—Jesus was breaking a cultural taboo because of both race and gender (John 4:9). Jesus then offered her “living water” (John 4:10). This confused her, and she responded, “Where can you get this living water? Are you greater than our father Jacob, who gave us the well and drank from it himself, as did also his sons and his flocks and herds?” (John 4:11-12). Apparently, the history of the well was common knowledge.

The traditional site of Jacob’s well cannot be located by finding Sychar, as that city is no longer in existence. However, the site thought to be the biblical Shechem, called Tel Balata by archaeologists, is near a well. This is important because the Bible says Jacob bought land from Shechem and lived at that place for a long time (Genesis 33:19). He would have required a well, and it is perfectly reasonable that he dug one. Also, the well at Tel Balata is indeed of ancient origin. These biblical and geographical facts point to the site as a good match for what the Samaritan woman called “Jacob’s well.”

Today, the well is inside the Church of St. Photina (the name traditionally given to the Samaritan woman by the Orthodox Church—the name is Svetlana in Russian). The church was originally built in A.D. 380. Through the years, the church was destroyed a number of times by natural and military forces. The current building is administrated by the Greek Orthodox Church, which obtained the site in 1893. The church and the well can be visited today in the West Bank.

The significance of Jacob’s well is that it provided an opportunity for Jesus to present Himself as the life-giving Messiah to a Samaritan woman and, later, to her whole village. The woman had asked, “Are you greater than our father Jacob?” The answer is a resounding “yes.” Jacob may have provided his children with physical water in an arid land, but Jesus provides His children with “living water” in a spiritual wasteland. The life Jesus gives satisfies all our needs and springs up to eternal life (John 4:14). - What is the significance of Jacob’s well? 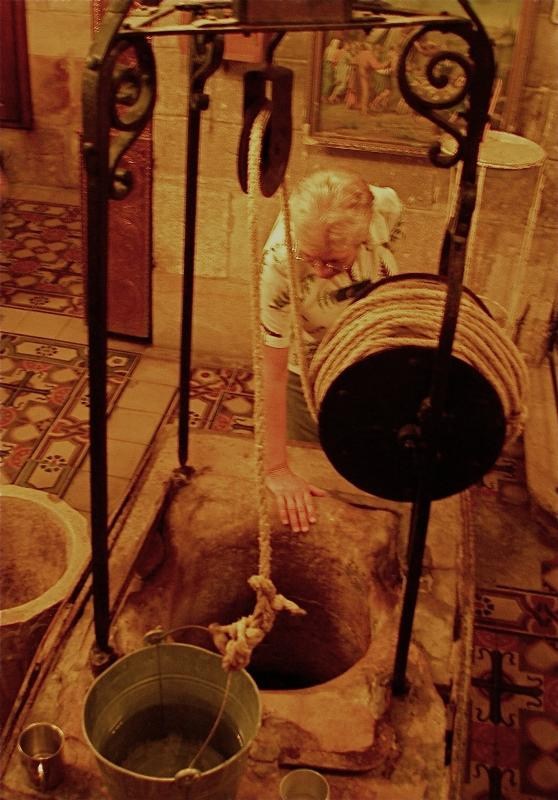 The only minor significance with the Church could perhaps be of some pius Catholic traditions or customs that exist in a few countries, such as the following:

In Oaxaca, Oaxaca, Mexico, a celebration of the Samaritan woman takes place on the fourth Friday of Lent. The custom of the day involves churches, schools, and businesses giving away fruit drinks to passers-by. (1) - Samaritan woman at the well

I think what Jesus might have known from traditions alive in His time would count as a Catholic answer, and this is precisely what a retired Catholic Professor of New Testament Studies at Notre Dame, Jerome H. Neyrey, S.J., investigated in his article titled "Jacob Traditions and the Interpretation of John 4:10-26" published in the Catholic Biblical Quarterly Vol 41 Issue 3 (1979).

I cannot find the PDF of the journal article, but the contents is accessible in the space allocated to his username at the Notre Dame website, but it has the wrong character set so I corrected it and made a PDF out of it.

This is Prof. Neyrey's line of inquiry, which included the OT, Targum, and Midrash:

Since John's text is explicit about Jacob at this point (4:5,6) and pointedly asks if Jesus is "greater than Jacob" (4:12), a systematic inquiry into the Jewish materials concerning Jacob seems warranted. The very question of the woman presupposes that Jacob is a well-known person, such that the points of comparison between Jesus and Jacob would be evident to the audience, both from its knowledge of the biblical text and from interpretations of that text found in sources such as targum and midrash. It is precisely this material which I propose to investigate: what is presupposed by the author to make "greater than Jacob" an intelligible statement and what importance does this comparison have for the understanding of the passage?

Although many of the sources of information about Jacob come from writings transcribed considerably later than John's Gospel, it will be shown that many of the Jacob traditions in them are presupposed by the argument in John 4, which fact presents evidence that these traditions certainly existed prior to John. Even when specific traditions, such as Jacob's visions of a future, restored temple, cannot be dated as early as John, nevertheless there seems to be evidence suggesting that Jacob texts were already loci for such expansion and that such lines of expansion were well under way in the first century. John's text, therefore, may prove to be an important relay station in the development of certain Jacob traditions even as it witnesses to a frequency which will soon bear greater traffic of legendary expansion.

And this is his conclusion:

THE SYSTEMATIC examination of Jacob traditions has thrown light on several statements in John 4: 10-26.

Not the answer you're looking for? Browse other questions tagged old-testament gospels faith or ask your own question.

9
What were Jesus's last words on the cross?
14
According to Protestantism, what is the significance of Jesus and the Mount of Transfiguration?
3
How does the Catholic church deal with the differences between the God described in the old and new Testaments?
1
Has the Catholic Church made any comparative study of the faith of Martha vis-a-vis that of Mary?
0
What does Catholic Church teach about the interpretation of the metaphor of “salt of the earth?”
5
Did Lot's daughters rape Lot?
2
Which, according to Catholic Church, is the writing in Old Testament that Jesus is referring to in Jn 7:38?