Did Rome prefer that Catholic clergy not work for national governments?

What has been the Catholic Church's position about its clergy taking jobs serving national governments? I have two examples, from the History question "Which Catholic priests were given diplomatic missions?":

I want to understand whether Rome and its representatives approved of these men's government appointments, looked the other way, or opposed them.

Did Rome prefer that Catholic clergy not work for national governments?

The short answer is historically possibly yes and no, but in modern times it is a definitely yes.

Things have changed over the centuries and Rome has become more explicit and demanding as to what or what not a Catholic priest may or may not do.

The political situation in past centuries is no where near what it is today.

Prior to the Code of Canon Law of 1917, these would have been decided on an individual basis.

The corresponding canons in the 1917 code made the same general assertions about the need for Catholic clerics to avoid activities that are considered unsuitable for them, and even provided some detailed examples. They specified that clergy should not go hunting, or even enter a tavern without a just cause, practise medicine without their superior’s approval or work as lawyers in civil courts. As for holding public office, the former code noted that as a rule, the clergy were not to seek or accept such a role without the permission of their own bishop (or in the case of clerics who were members of religious institutions, their religious superior), and the bishop of the territory in which the election is being held.

Keep in mind that the world was different place back 1917, and the Church back at that time foresaw instances in which a priest might reasonably be allowed to work as an elected official in some countries. Back then, numerous countries had laws declaring Catholicism the official state religion, and so the relationship between the civil government and the Catholic Church in these nations was very different from the one that we Americans are accustomed to today. - Can Priests Hold Public Office?

In modern days, priest are no longer be allowed to hold any public office at all. Pope John Paul II made this very clear in the new code of Canon Law (1982) with the following statement:

Can. 285 §1. Clerics are to refrain completely from all those things which are unbecoming to their state, according to the prescripts of particular law.

§2. Clerics are to avoid those things which, although not unbecoming, are nevertheless foreign to the clerical state.

§3. Clerics are forbidden to assume public offices which entail a participation in the exercise of civil power.

Since the new code was promulgated, the Vatican has taken this subject matter very serious. I can still remember see Father Fernando Cardenal kneeling down to receive the blessing of Pope John Paul II in 1984 and seeing the Roman Pontiff refuse to bless him. In fact, Pope John Paul II waged his finger at him saying something like “when you will obey!” 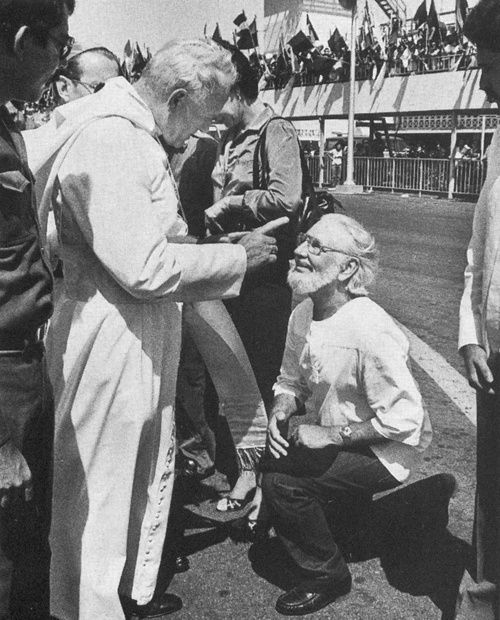 During his visit to Nicaragua in 1983, Pope John Paul II publicly reprimanded Fr Ernesto Cardenal as the priest knelt to welcome the pope at Managua airport.

More information may be found in the following article(s):

Not the answer you're looking for? Browse other questions tagged catholicism church-history politics .

46
When did the prohibition of marriage for priests in the Catholic church originate?
11
Where does the Catholic tradition that Mary did not have pain giving birth to Jesus come from?
0
Where does the Catholic church stand on governments supporting foreign groups or other governments that abuse human rights?
2
Does the Catholic Church teach that God requires our consent to work miracles on us?
1
In a Catholic viewpoint, is it possible for Rome to fall?
3
Did Jesus work for a living?
6
Did Chesterton ever explain why he did not formally become a Catholic until long after he had starting thinking and writing for Catholics?