Where did the idea of deacon's benches come from and what are they for?

A friend of mine is a few months from ordination to the permanent deaconate, I thought it'd be a fun project for the my Timberwolf troop to make him a Deacon's Bench. But is that something deacon's typically have or is the whole idea of a deacon's bench just a wide bench that a couple of deacons can sit on in the sanctuary of a church during Mass (or do deacons often have butts that wide?)? And hence, kind of a pointless things to give a deacon.

Also, is it a more properly called a deacons' bench?

Pintrest link for people who might want to look at some wide benches.

Where did the idea of deacon's benches come from and what are they for?

To start with the idea of a deacon’s bench is a somewhat modern terminology for a specific type of bench. In fact the first known usage of this phrase dates back to about 1922. Thus it cannot be claimed as a tradition in any stretch of the imagination, ecclesiastical or secular.

By definition a deacon’s bench is defined as follows:

A kind of bench whose hinged seat is also the lid of an enclosed storage compartment. - Source

Thus an example of a properly defined deacon’s bench can be seen below. 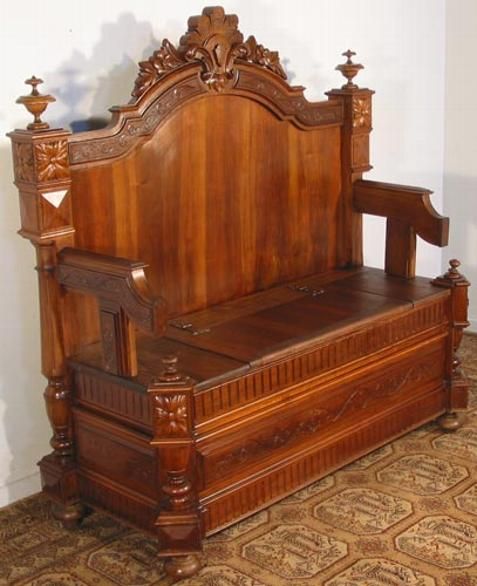 The terminology of a deacon’s bench in English is somewhat misleading to me. I have seen such types of ecclesiastical furniture in both traditional Catholic churches and in chapter houses of traditional Benedictine monks in France. The term alludes me as to what they actually called in French. In France these are basically ecclesiastical storage pieces of furniture and no one actually sits on them, as they are generally placed in a corner. I guess some clerics or atlas servers could in theory use them for sitting during some liturgical function.

Deacon benches in the actual church would store the missal, the lectionary and the breviary. In monastic chapter houses, the deacon’s bench would contain the Martyrology, and the Rule of St. Benedict, as well as other books pertaining to the monastic customs and the declarations (and norms) of the particular Congregation in question.

In other words, the deacon’s bench contain all the books necessary for any and all liturgical functions in either the church, cathedral or chapter. It is of no consequence if their is actually an ordained deacon in residence or not.

The term now seems to mean a variety of different types of benches in English and are of no ecclesiastical usage whatsoever.

The French term for the style of bench is called a Banc-coffre d'église.

More information may be gleaned here.

A bishop’s chair (cathèdre) in French is quite similar but has actual seating space for the bishop only. The bishop’s chair actually serves two purposes: it seats the bishop and stores his personal liturgical books. 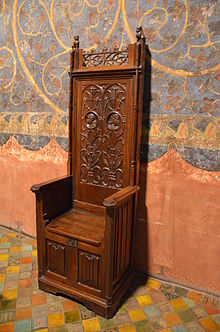 Not the answer you're looking for? Browse other questions tagged deacons ecclesiastical-furniture or ask your own question.

5
Why are archdeacons (Anglican, Catholic, or Orthodox) called “The Venerable”? What is the origin, in Latin and English, of this title?
5
In Presbyterianism, what is the basis for a parallel between the office of deacon and Christ's priestly office?