Does the Catholic canon law say anything about women being priests?

Is there any canon law in the Catholic Church about the role of women in the church and its possibilities to be groomed for Priesthood?

The Code of Canon Law makes it clear that only a male can be ordained validly. This is teaching of the Church going back centuries and most recently outlined by Pope John Paul II in Ordinatio Sacerdotalis

The priesthood being only for men doesn't mean women have no role. Not all men are eligible to be priests and not every man desires to either. There are many roles for both men and women, some are exclusive to one or the other and some are for either.

Does the Catholic canon law say anything about women being priests?

Only a validly baptized male may be ordained to the priesthood. Canon Law states the following:

Can. 1025 §1. To confer the presbyteral or diaconal orders licitly, it is required that the candidate, having completed the period of probation according to the norm of law, is endowed in the judgment of his own bishop or of the competent major superior with the necessary qualities, is prevented by no irregularity and no impediment, and has fulfilled the prerequisites according to the norm of ⇒ cann. 1033-1039. Moreover, the documents mentioned in ⇒ can. 1050 are to be obtained and the investigation mentioned in ⇒ can. 1051 is to be completed.

Pope St. John Paul II in his Apostolic Letter, Ordinatio Sacerdotalis basically put an end to any and all possibilities of women being ordained priests.

Wherefore, in order that all doubt may be removed regarding a matter of great importance, a matter which pertains to the Church's divine constitution itself, in virtue of my ministry of confirming the brethren (cf. Lk 22:32) I declare that the Church has no authority whatsoever to confer priestly ordination on women and that this judgment is to be definitively held by all the Church's faithful.

Nevertheless and notwithstanding that some bishops do allow women (young girls) to serve at the altar, since it has been permitted for them to serve as readers at Mass already. This has been allowed by Rome since 1994.

3) If in some diocese, on the basis of Canon 230 #2, the Bishop permits that, for particular reasons, women may also serve at the altar, this decision must be clearly explained to the faithful, in the light of the above-mentioned norm. It shall also be made clear that the norm is already being widely applied, by the fact that women frequently serve as lectors in the Liturgy and can also be called upon to distribute Holy Communion as Extraordinary Ministers of the Eucharist and to carry out other functions, according to the provisions of the same Canon 230 #3. - Vatican Communication on Female Altar Servers

There were deaconesses in the Early Church. It should be stressed that these deaconesses were non-ordained women who aid in the ministry of the sacraments, notably baptism. It is not impossible, though doubtful, that the Church could reinstate this practice. After all Pope Paul VI reinstated the practice of deacons being married.

Deaconesses should carry out the anointing of women in the rite of baptism, instruct women neophytes, and visit the women faithful, especially the sick, in their homes. They were forbidden to confer baptism themselves, or to play a part in the Eucharistic offering (DA 3, 12, 1-4). The deaconesses had supplanted the widows. The bishop may still institute widows, but they should not either teach or administer baptism (to women), but only pray (DA 3, 5, 1-3, 6, 2).

The Constitutiones Apostolorum, which appeared in Syria towards 380, used and interpolated the Didascalia, the Didache and the Traditio Apostolica. The Constitutiones were to have a lasting influence on the discipline governing ordinations in the East, even though they were never considered to be an official canonical collection. The compiler envisaged the imposition of hands with the epiklesis of the Holy Spirit not only for bishops, priests and deacons, but also for the deaconesses, sub-deacons and lectors (cf. CA 8, 16- 23).6 The concept of kleros was broadened to all those who exercised a liturgical ministry, who were maintained by the Church, and who benefited from the privileges in civil law allowed by the Empire to clerics, so that the deaconesses were counted as belonging to the clergy while the widows were excluded. Bishop and priests were paralleled with the high priest and the priests respectively of the Old Covenant, while to the Levites corresponded all the other ministries and states of life: “deacons, lectors, cantors, door-keepers, deaconesses, widows, virgins and orphans” (CA 2, 26, 3; CA 8, 1, 21). The deacon was placed “at the service of the bishop and the priests” and should not impinge on the functions of the latter.7 The deacon could proclaim the Gospel and conduct the prayer of the assembly (CA 2, 57, 18), but only the bishop and the priests exhorted (CA 2, 57, 7). Deaconesses took up their functions through an epithesis cheirôn or imposition of hands that conferred the Holy Spirit,8 as did the lectors (CA 8, 20, 22). The bishop pronounced the following prayer: “Eternal God, Father of our Lord Jesus Christ, creator of man and woman, who filled Myriam, Deborah, Anne and Hulda with your spirit; who did not deem it unworthy for your Son, the Only-Begotten, to be born of a woman; who in the tent of witness and in the temple did institute women as guardians of your sacred doors, look now upon your servant before you, proposed for the diaconate: grant her the Holy Spirit and purify her of all defilement of flesh and spirit so that she may acquit herself worthily of the office which has been entrusted to her, for your glory and to the praise of your Christ, through whom be glory and adoration to you, in the Holy Spirit, world without end. Amen.”

The deaconesses were named before the sub-deacon who, in his turn, received a cheirotonia like the deacon (CA 8, 21), while the virgins and widows could not be “ordained” (8, 24- 25). The Constitutiones insist that the deaconesses should have no liturgical function (3, 9, 1-2), but should devote themselves to their function in the community which was “service to the women” (CA 3, 16, 1) and as intermediaries between women and the bishop. It is still stated that they represent the Holy Spirit, but they “do nothing without the deacon” (CA 2, 26, 6). They should stand at the women’s entrances in the assemblies (2, 57, 10). Their functions are summed up as follows:

“The deaconess does not bless, and she does not fulfil any of the things that priests and deacons do, but she looks after the doors and attdends the priests during the baptism of women, for the sake of decency” (CA 8, 28, 6).

The Ministry of Deaconess?

The Catholic Church has at least one canonized deaconesses as a saint: Olympias the Deaconess

Her good works included building a hospital, an orphanage and even looking after Monks who had been led in exile from Nitria. All of this even led to John Chrysostom telling her that she had done almost too much. Her support for John Chrysostom led her to being exiled in 404, which resulted her in losing her house and living the rest of her life in exile at Nicomedia, where she would die on July 25, 408, after a long illness. Olympias is one of the 140 Colonnade saints which adorn Saint Peter's Square. 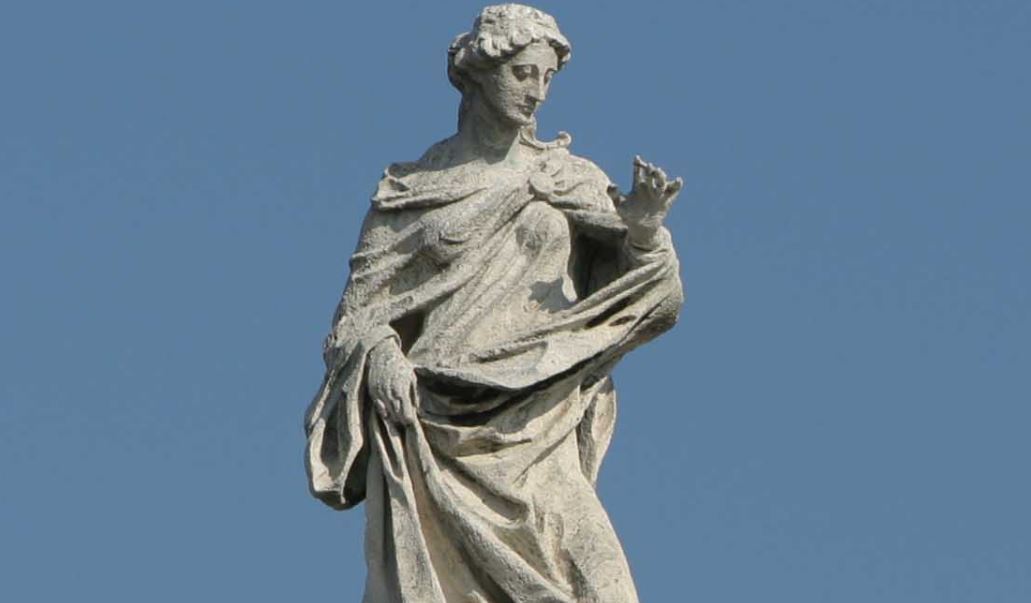 This statue of Olympiasis one of 140 statues of saints that surround St Peter’s Square in Vatican City.

Please permit me to address one last note about woman proclaiming the Gospel in the Catholic Liturgy. At Mass, this is and always reserved to the priest or deacon. That point is final.

However, abbesses are permitted to read the Gospel of the day at matins and vespers. In fact, prior to the Second Vatican Council some abbesses (Cistercian and Carthusian) had the privilege of wearing a stole for this occasion. Carthusian abbesses were permitted to wear the maniple also, but on the right arm and not the left like priests. I am unaware if this privilege still exists or not. We should not look into this privilege as some form of ordained deaconesses.

At Matins, if no priest be present, a nun assumes the stole and reads the Gospel. - Carthusian nun

Not the answer you're looking for? Browse other questions tagged catholicism priesthood canon-law female-clergy .