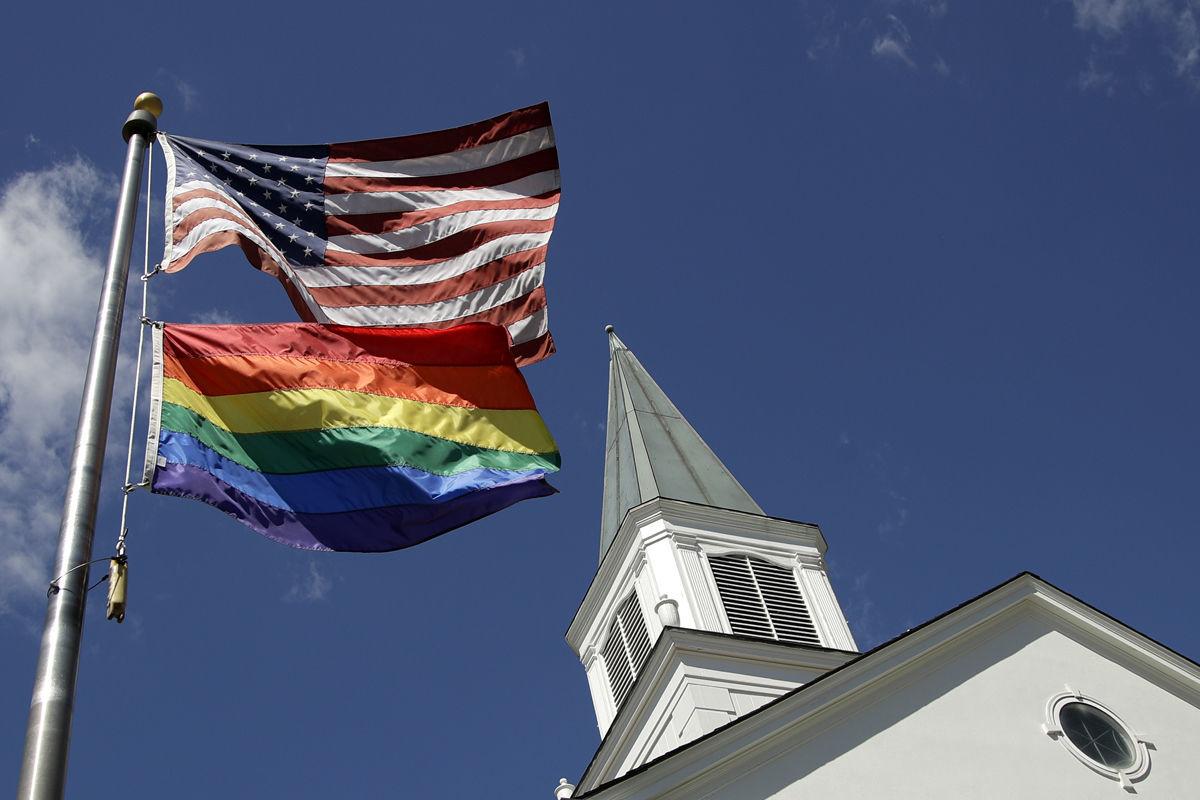 A gay pride rainbow flag flies along with the U.S. flag in front of the Asbury United Methodist Church in Prairie Village, Kan., on April 19, 2019. United Methodist Church leaders are proposing the creation of a separate division that would let more traditional denominations break away because of the disagreement with churches over the UMC’s official stance on gay marriage. AP FILE.
Story here

What arguments do traditional UMC leaders make for separating themselves from the church over its stance on gay marriage?

The reason why traditional UMC leaders want to separate themselves from the church over its stance on gay marriage is based on the traditional and historic position of the church which views the practice of homosexuality as incompatible with Christian teaching. Here are extracts from a couple of articles on the subject:

As stated in the Book of Discipline of The United Methodist Church, the United Methodist Church holds that "homosexual persons no less than heterosexual persons are individuals of sacred worth." In other words, all individuals are of worth to God. Nevertheless, in keeping with historic Church teaching, it considers the "practice of homosexuality [to be] incompatible with Christian teaching,"

The third plan, called the Traditional Plan, would reinforce the existing language in the Book of Discipline prohibiting homosexuality, gay marriage ceremonies on church campuses, and allow for stricter enforcement of violations of existing church law. On February 26, 2019, during a special session of the General Conference, delegates from around the world voted to pass the Traditional Plan... In January 2020, a 16-person committee of bishops and other official submitted to the General Conference a schism proposal for the creation of a new separated "traditional Methodist" denomination, a text that still needs to be approved by the conference in May. By default, any parish will be set as a member of the United Methodist Church (UMC) and would have to conduct votes in order to enter in the new-born communion of the more conservative Methodists. Source: United Methodist Church (Wikipedia)

EDIT: Here is an extract from an official UMC article based on the 2008 Book of Resolutions asking: What is the denomination's position on homosexuality? Regarding clergy:

¶ 304.3 While persons set apart by the Church for ordained ministry are subject to all the frailties of the human condition and the pressures of society, they are required to maintain the highest standards of holy living in the world. The practice of homosexuality is incompatible with Christian teaching. Therefore self-avowed practicing homosexuals are not to be certified as candidates, ordained as ministers, or appointed to serve in The United Methodist Church.

The latest update on the situation suggests that a new “traditional Methodist” denomination is to be formed:

January 3, 2020 (Life Site News) – The United Methodist Church (UMC) announced Friday it will be dealing with ongoing divisions over homosexuality by formally splitting, with the formation of a new denomination for Methodists who hold to a Biblical understanding of sex and marriage. The church has been divided over the issues of same-sex “marriage” and homosexual clergy, with its General Conference voting in February against compromising its opposition. Tensions have continued since, however, and on Friday the church announced the formation of a new “traditional Methodist” denomination for more conservative Methodists, the New York Times reports. Source: BREAKING: United Methodist Church officially splits over gay ‘marriage,’ clergy

Not the answer you're looking for? Browse other questions tagged homosexuality methodist same-sex-marriage or ask your own question.

24
How would Reformed Christians deal with homosexual marriage of individuals prior to their conversion to Christianity?
27
How do Christians in support of gay marriage interpret anti-gay Bible verses?
4
Does Exodus Ministries' about-face on “pray away the gay” signal a theological change?
3
Are there any churches that claim to be Sola Sciptura that also are pro gay-marriage?
8
Does the Orthodox Church accept Gay marriage and why?
1
What do Christians against state recognition of same-sex marriage think of the fourteenth amendment in US law?
3
Was this (allegedly gay) marriage in a Catholic Church valid?