What is the official Catholic view of a feminine element within the Trinity?

I would appreciate an overview on any official Catholic position on this subject. This question is directed at both Western and Eastern Catholic Churches. The Catechism of the Catholic Church #239 states that God is called "Father", while his love for man may also be depicted as motherhood, but he ultimately transcends the human concept of sex, and that "God is neither man nor woman: he is God".

Does the Catholic Church subscribe to the view that the Trinity is a family and does it contain a feminine element? I would appreciate quotes from the Bible to support official teachings along with other Church sources.

What is the Catholic view of the Trinity and does it contain a feminine element?

The Trinity is the term employed to signify the central doctrine of the Catholic religion, the truth that in the unity of the Godhead there are Three Persons, the Father, the Son, and the Holy Spirit, these Three Persons being truly distinct one from another.

Catholics are baptized "in the name of the Father and of the Son and of the Holy Spirit". Before receiving the sacrament, they respond to a three-part question when asked to confess the Father, the Son and the Spirit: "I do." "The faith of all Christians rests on the Trinity."

What is the Trinity?

A term used since A.D. 200 to denote the central doctrine of the Christian religion. God, who is one and unique in his infinite substance or nature, is three really distinct persons, the Father, Son, and Holy Spirit. The one and only God is the Father, the Son, and the Holy Spirit. Yet God the Father is not God the Son, by generates the Son eternally, as the Son is eternally begotten. The Holy Spirit is neither the Father nor the Son, but a distinct person having the divine nature from the Father and the Son by eternal procession. The three divine persons are co-equal, co-eternal, and consubstantial and deserve co-equal glory and adoration. - The Holy Trinity

In essence there is no feminine principle in the Trinity. Nevertheless some have expressed a feminine element so to speak in regards to the person of God the Father and God the Holy Spirit.

The Catechism of the Catholic Church states that God is called "Father", while his love for man may also be depicted as motherhood, but he ultimately transcends the human concept of sex, and that "God is neither man nor woman: he is God".

The Father revealed by the Son

238 Many religions invoke God as "Father". The deity is often considered the "father of gods and of men". In Israel, God is called "Father" inasmuch as he is Creator of the world.59 Even more, God is Father because of the covenant and the gift of the law to Israel, "his first-born son".60 God is also called the Father of the king of Israel. Most especially he is "the Father of the poor", of the orphaned and the widowed, who are under his loving protection.61

Of the thirty or so parables in the canonical Gospels, the Prodigal Son was one of the four that were shown in medieval art almost to the exclusion of the others, but not mixed in with the narrative scenes of the Life of Christ (the others were the Wise and Foolish Virgins, Dives and Lazarus, and the Good Samaritan. The Labourers in the Vineyard also appears in Early Medieval works).

God the Father will never forget his children here on earth, just as a mother would never forget the child of her womb.

Can a woman forget her infant, so as not to have pity on the son of her womb? and if she should forget, yet will not I forget thee. - Isaiah 49:15 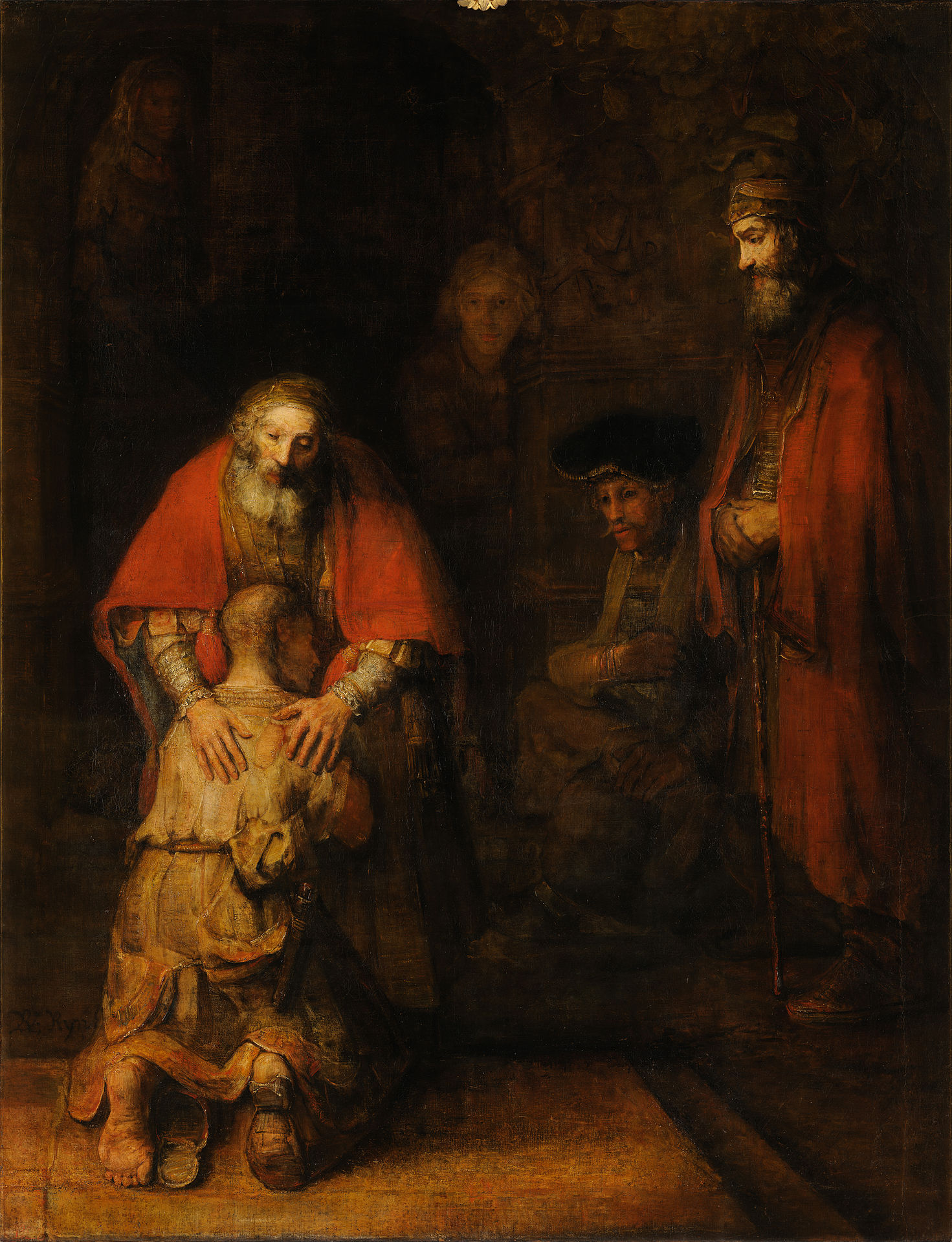 This painting is perhaps the most famous, dramatic and beautiful presentation of the forgiving and accepting grace of God the Father. As was Rembrandt’s custom, he presents the figures in this piece primarily in darkness, with the primary light being on the face of the father, his embracing hands upon the back of his returned son, as well as upon the face of the jealous and judgmental older brother. Notice how Rembrandt has the son positioned between the arms of the father. These arms are both receiving and protectively outlining the son. In this tender embrace, we can wonder if Rembrandt had John 1:18 in mind where we are told that God the Son dwelt in the bosom of God the Father.

Roger Scruton comments in session 9 of The Family Project, “These are hands that are not in the business of judging or scolding.” Henri Nouwen, in his wonderful devotional on this painting, asks a question about these hands which are distinctly different from one another. One, the left, is large, strong and masculine. The right is smaller, more slender. Perhaps feminine? Could they represent both fathering and mothering nature of God? Nouwen tells of one of his friends pointing out to him how these two hands correspond with the difference in the son’s feet. He explains,

It is very possible, as this is God’s heart and nature toward each of us. - Rembrandt’s “Return of the Prodigal Son”

Further food for though may be obtain with the following(s):

What is the Catholic view of the Trinity and should it contain a feminine element?

The best answer can be found in St. Louis De Montfort book "Love for Eternal Wisdom" as he sees God not just a creator but a parent.

King Solomon discovered that the Wisdom is a Mother of All, and this is where the feminine aspect of God was seen by this Great Marian saint.

In the creation of the world

Also, the feminine aspect of God can be well appreciated thru artistic depiction like the cover of the book of Fr. Richard Rohr titled "Divine Dance", here we can see the image of the Most Holy Trinity resembles the a feminine faces. 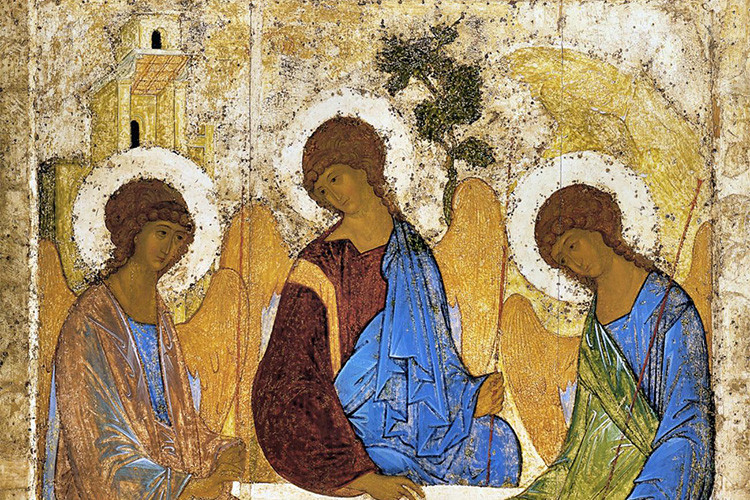 “We must begin with Trinity if we are to rebuild Christianity from the bottom up. The Trinity is absolutely foundational to Christianity because it reveals the heart of the nature of God.” – Fr. Richard Rohr

Here’s the math behind Rohr’s Trinitarian message: while One is lonely, and Two oppositional, the number Three represents a moving, dynamic, and generative flow. “In the beginning was the relationship,” he affirms, and therein lies our salvation. His new approach calls for new definitions: “The Father is Being itself” (think of the words flowing, formless, nothingness, mystery), and the Christ is a “living manifestation” of that Being. What’s more, the major future task of Christian theology and practice will be to bring Jesus and the Christ together in our understanding. As for the Holy Spirit or “Implanted Hope,” whenever it is missing, we are robbed of that “inner aliveness that keeps people from dying from their wounds.” https://parabola.org/2018/01/31/divine-dance-trinity-transformation/

But the greatest art that depicted the Most Holy Trinity in Catholicism is the Holy Family. 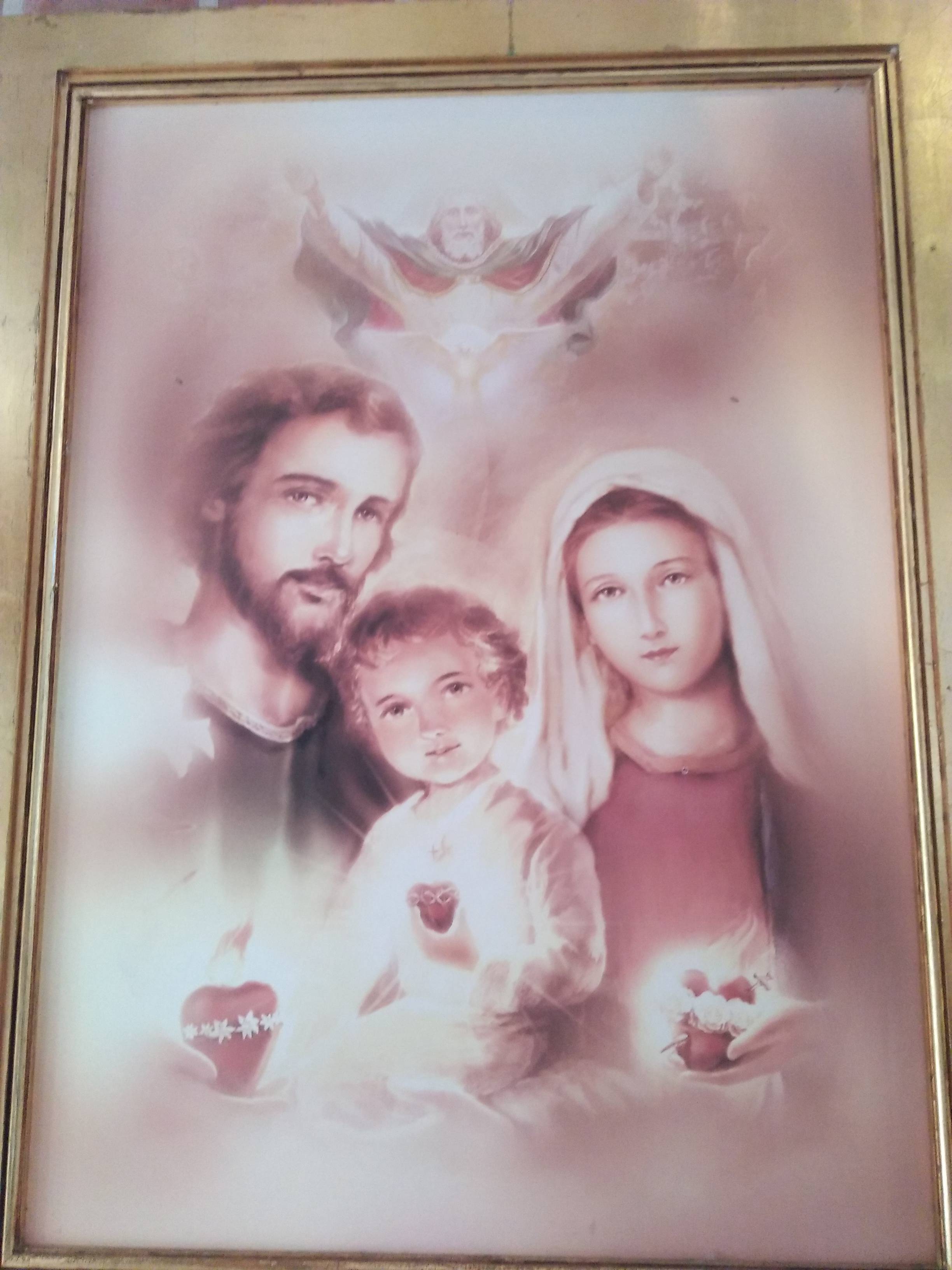 In Catholicism, St. Joseph resemble the image and character of the Abba Father as protector and provider while Mary is closely associated with the Holy Spirit being Her spouse and Jesus Christ represents the incarnated Logos the second person of the Most Holy Trinity.

Not the answer you're looking for? Browse other questions tagged catholicism trinity persons-of-the-trinity or ask your own question.

7
What is Roman Catholic Church's official view on the nature of Christ?
18
What was Isaac Newton's view of the Trinity?
3
Is my view of the Trinity accurate, and what is exactly the role of the Holy Spirit
5
What is the Anglican and Episcopalian basis for viewing the Trinity as a family that should contain a feminine element?
4
Does there exist within the Catholic Church a church, cathedral or even an altar dedicated to the Holy Spirit?