What is the Anglican and Episcopalian basis for viewing the Trinity as a family that should contain a feminine element?

I would like to find out what various Christian denominations have to say on this subject. My first question is directed at the Anglican/Episcopal Church which is in the process of revising its 1979 prayer book to remove any reference to God by masculine pronouns.

Of greater significance to me is what the Bible has to say about this and so I would welcome any biblical support for removing the masculine element from the person of God and introducing a feminine element within the Godhead.

I have now edited this question to make it clear that I am looking for the views of the Anglican and Episcopalian communities.

This question is open to input from any member of the community who can provide additional information.

What is the Anglican and Episcopalian basis for viewing the Trinity as a family that should contain a feminine element?

There are many overlapping views of the Anglican and Episcopalian Church with that of the Catholic Church.

They say a picture is worth a thousand words! 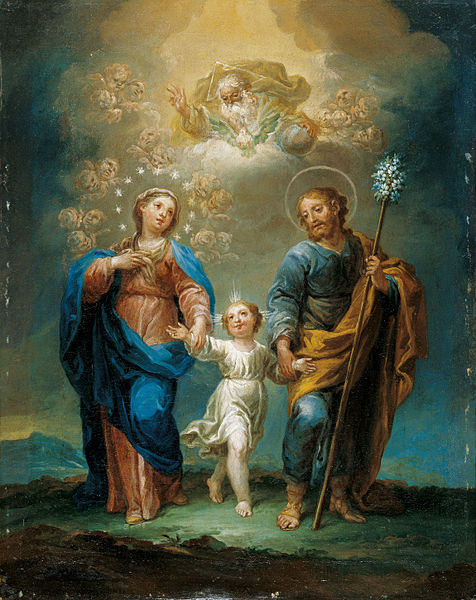 The Trinity of the Earth by Jerónimo Ezquerra

While the work of the Holy Spirit is widely known, we are hard-pressed to arrive at a precise definition. This may be because, compared with the Father and the Son, there is a lack of concrete imagery of the Holy Spirit. One issue is its gender. The Hebrew word for "spirit," ruach, is of feminine gender, while the Greek word pneuma is neuter. Despite the Church's official doctrine that the Holy Spirit is masculine, individuals and groups throughout the history of Christianity, including luminaries like St. Jerome (c.342-420) and Martin Luther (1483-1546), have repeatedly proposed that the Holy Spirit is feminine. In rabbinic Judaism the Holy Spirit is equated with the Shekhinah, the mother aspect of God. In light of the biblical notion of the androgynous image of God who created male and female in his image (Gen. 1:27), it has been suggested that a feminine Holy Spirit would be the appropriate counterpart to the male figure of the Son, who is manifest in Jesus Christ. The work of the Holy Spirit as comforter, intercessor and source of inspiration could be represented in the ministrations of Mary and other holy women of God. - Holy Spirit

The Inclusive Language Lectionary published by the American National Council of Churches, to which many Protestant churches belong, states in its introduction "The God worshiped by the biblical authors and worshiped in the Church today cannot be regarded as having gender, race, or colour."

In general the imagery of God’s feminine side could be seen in some of the Reformers.

Martin Luther’s commentary on Isaiah 46:3 suggested that God has not spoken “more sweetly than in transferring a mother’s experiences to Himself … God cares for us with an everlasting maternal heart and feeling.” Commenting on Isaiah 49:15, Luther further highlights God’s immanence in these words: “I will not forsake you, because I am your mother. I cannot desert you.” For the reformers such as Luther, God is accessible through scripture, which he imaged as the womb of God. Through faith and an encounter with scripture, Luther suggests that we receive “paternal love and thoroughly Maternal Caresses.” Luther also said that God was the feminine breast upon which he cast himself in moments of utter exhaustion. Through feminine imagery, therefore, Luther illustrated the tenderness and accessibility of God.

For Calvin, all knowledge of God arises through biblical revelation. Therefore, to create an image of God in material form was contrary to scripture, he argued. Calvin said: “God’s glory is corrupted by an impious falsehood whenever any form is attached to him.” Scripture thus prohibits creating graven idol for God “by any visible image.”

Yet like Luther, Calvin makes use of maternal metaphors for God in Isaiah. Again, the immanence of God is illuminated through the mother motif. Isaiah, Calvin argued, used maternal images to help us understand God’s immanent care and love. God does not rely solely upon paternal images, but “in order to express his very strong affection, [God] chose to liken himself to a mother.” God, like a mother (Isaiah 42:14), “expresses astonishing warmth of love and tenderness of affection.” God “singularly loves her child, though she brought him forth with extreme pain.” Thus God has “manifested himself to be both their father and their mother, [and] will always assist them.” In defense of his maternal images of God, Calvin suggests that “in no other way than by such figures of speech can his ardent love toward us be expressed.” - Evidence for and Significance of Feminine God-Language from the Church Fathers to the Modern Era

Although the question asks for Anglican or Episcopalian sources, I would like simply to point out that the Catechism of the Catholic Church makes reference to the maternal aspects within the Sacred Trinity.

I am under the impression that there are no clearly defined teachings on this issue in either the Lutheran or Anglican Churches.

Disclaimer: With Lesley, I too neither support nor endorse the view of "the feminine" within the Godhead.

During the course of my research into this subject I found an article that presents some views of the Episcopalian Church with regard the feminine element within the Godhead:

The prayer book, first published in 1549 and now in its fourth edition, is the symbol of unity for the Anglican Communion. The Anglican Communion is the third largest Christian communion founded in 1867. While there is no clear timeline for the changes, religious leaders at the denomination’s recent triennial conference in Austin have agreed to a demand to replace the masculine terms for God such as “He” and “King” and “Father.”

In the oracles of the eighth century prophet Isaiah, God is described as a woman in labor and a mother comforting her children. And the Book of Proverbs maintains that the feminine figure of Holy Wisdom, Sophia, assisted God during the creation of the world. Indeed, The Church Fathers and Mothers understood Sophia to be the “Logos,” or Word of God. Additionally, Jewish rabbis equated the Torah, the law of God, with Sophia, which means that feminine wisdom was with God from the very beginning of time.

With regard to Exodus 3:14 where God reveals His name to Moses, they make this claim:

[Yahweh] is a remarkable combination of both female and male grammatical endings. The first part of God’s name in Hebrew, “Yah,” is feminine, and the last part, “weh,” is masculine. In light of Exodus 3, the feminist theologian Mary Daly asks, “Why must ‘God’ be a noun? Why not a verb, the most active and dynamic of all?”

They take Jesus’ words in Matthew 23:37 to infer that Jesus is presenting himself in feminine language when he says he has longed to gather the rebellious children of Jerusalem together “as a hen gathers her chicks under her wings.” The writer of this article goes on to claim that:

the author of Matthew equates Jesus with the feminine Sophia (wisdom), when he writes, “Yet wisdom is vindicated by her deeds.” In Matthew’s mind, it seems that Jesus is the feminine Wisdom of Proverbs, who was with God from the beginning of creation. In my opinion, I think it is very likely that Matthew is suggesting that there is a spark of the feminine in Jesus’ nature. Additionally, in his letter to the Galatians, written around 54 or 55 A.D., Paul says that he will continue “in the pain of childbirth until Christ is formed in you.” Clearly, feminine imagery was acceptable among the first followers of Jesus.

The article goes on to quote from Clement, Augustine and Gregory in support of the argument. Source: What the early church thought about God’s gender

Anglicans and Episcopalians have always worked and worshipped together across national borders to support each others' lives and ministry. Source: What is the Anglican Communion?

I will continue to look into this subject in an attempt to find a definitive statement from the Anglican Church. Meanwhile, I would be grateful for any other information that can shed light on why the Anglican Community and the Episcopalian Church believes that there is a feminine element within the Godhead.

Disclaimer: I neither support nor endorse the view of "the feminine" within the Godhead. My question is merely to ascertain the basis for this view within the Episcopalian and Anglican Churches. This is a fact-finding mission.

Not the answer you're looking for? Browse other questions tagged trinity anglicanism persons-of-the-trinity episcopal or ask your own question.

0
Is 'pure' monotheism of more primitiveness and innateness than the Trinity is?
0
Is this a Calvinistic or Arminian statement of faith?