My son’s grandmother was Roman Catholic and she wanted us to have him baptised without delay. However, given we did not intend to bring him up in the Catholic faith, that would not have been possible. I found lots of information in this article: Infant Baptism.

I am also aware that confirmation takes place later, at around age 7, the age of discretion. Source: Confirmation

Since then, I have wondered if baptised infants of Catholic parents are identified as being a member of the Catholic Church. Is a baptismal certificate given to the parents, and, if so, what does it say? Or does a child not become a recognised Catholic until after confirmation? And what obligations and responsibilities does that confer upon the child?

Children baptized as infants are recognized as being Catholics, regardless if the parent really bring the child up in the Catholic Faith or not. All children who die and are baptized in the Church may be buried in the Church. Even after the age of reason they will be recognized as Catholics, but are not allowed to receive other sacraments until the sacrament of confirmation and reconciliation have been received. Until then they are often seen as Catholics who are not practicing their faith.

The child must be properly educated in order to be confirmed in the Latin Rite. If he or she does not attend religious formation classes, they will not be confirmed or receive communion in the Church until properly instructed. Some such Catholics eventually attend RCIA (Rite of Christian Initiation of Adults) as adults in order to become fully incorporated into the mystical body of Christ.

I know some priests that will baptize the first child of parents that are of dubious in their possible commitments and will refuse baptism for a second child if the first is not instructed in the faith. Other priests will baptize a second and third child in the hope that parents will eventually educate the children as Catholics.

At the baptism of a child in the Catholic Church, the parents will receive a baptismal certificate. 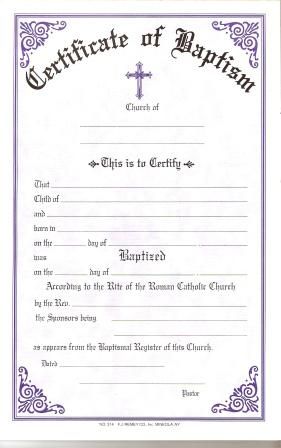 The parish registry will contain the listing in addition of the child’s name, the parents names, the godparent’s names, the priest who performed the baptism and the name of the parish church where it was performed.

The place of baptism is very impossible for a practicing Catholic to remember. Each additional sacrament such as confirmation, marriage, ordination to the priesthood will be sent to person’s church of baptism and the information will be inscribed into the official baptismal registry of the individual. Catholics may request this information at any time. It is obligatory for entering a seminary or a Religious Order.

Here is an example for such a request from the Archdiocese of Toronto, Canada.

Since then, I have wondered if baptised infants of Catholic parents are identified as being a member of the Catholic Church.

Well, identified by whom? "Being a Catholic" is not, as far as I'm aware, any sort of metaphysical state in Catholicism in and of itself. We just have sacraments of initiation, and what they each represent and accomplish. Baptism is one of those sacraments, and per Catholic beliefs has a real effect - washing away original sin, being born again in Christ, etc. But it's also an unusual sacrament in that the Church considers it valid even if you got it from a non-Catholic Christian denomination (cf "there is one Lord, one faith, one baptism..." etc).

That said, when/if someone who's been baptized later goes to receive Confirmation (which in my experience generally happens mid-teenage years at earliest, rather than ~7 which is more First Communion time), the fact that they got a Catholic baptism does matter slightly. As I understand it, the normal way things work is that if you received a Catholic baptism, once you're old enough you can go straight to Confirmation classes, and from there to the remaining sacraments of initiation. If you got a non-Catholic, but still Christian, baptism, you'll have to go through an extra step to bring you into "full communion" with the Catholic Church - essentially, a step to make sure you understand Catholic beliefs as distinct from whatever you might have learned in other Christian denominations, and an affirmation that you're willing to sign onto those beliefs.

So tl;dr as I understand it: it's not that a Catholic baptism "makes you a Catholic" in some bright-line metaphysical sense (and drawing that line is not really relevant IMO), but rather:

Not the answer you're looking for? Browse other questions tagged catholicism baptism confirmation or ask your own question.

6
What is the Biblical basis for the Catholic teaching that infant baptism cleanses from original sin?
4
What are the differences between demoninations regarding baptism/confirmation?
5
Do infant-baptizing Protestant denominations have any requirements on names?
1
According to the Catholic Church, does any child have the “right” to be baptized?
6
Can you re-enter the catholic church after leaving?
3
Does any version of the Anglican church associate 'confirmation' with the Baptism of the Holy Ghost?
5
Are there involuntary Catholics?