I was at a gathering of group leaders for the Federation of North American Explorers, (a group operating under the FSE; a Vatican approved lay association of the faithful). A leader from Quebec said that they were either denied communion or told to leave by a priest because they would only receive Communion on the tongue. One of the rules of FNE is that members receive the Eucharist kneeling and on the tongue.

Regardless of the plot holes in the above example (I should have asked more, but there was a bit of a language barrier), does a priest have the right to tell anyone to leave Mass (or deny them Communion) because of how they choose to receive?

Receiving the Communion on the tongue or kneeling is never a legal reason for denying Communion.

The instruction Redemptionis Sacramentum "On certain matters to be observed or to be avoided regarding the Most Holy Eucharist" of the Congregation for Divine Worship and the Discipline of the Sacraments deals with this topic [bold by me]:

This passage comes in a series of "grave matters" (n. 173). I think most Catholic will find some of these "litugical abuses" in their parish, so it does not mean the "abuse" is rare. That it is explicitly named means instead it happens (in some regions) often.

If - on the other hand - such a rule of FNE is legal, is another question and remains open.

Denying the faithful Holy Communion on the grounds solely on the grounds that the person wishes to receive the Eucharist kneeling or standing, on the tongue or in the hands is not a legitimate reason for denial.

[90.] “The faithful should receive Communion kneeling or standing, as the Conference of Bishops will have determined”, with its acts having received the recognitio of the Apostolic See. “However, if they receive Communion standing, it is recommended that they give due reverence before the reception of the Sacrament, as set forth in the same norms”.

[91.] In distributing Holy Communion it is to be remembered that “sacred ministers may not deny the sacraments to those who seek them in a reasonable manner, are rightly disposed, and are not prohibited by law from receiving them”. Hence any baptized Catholic who is not prevented by law must be admitted to Holy Communion. Therefore, it is not licit to deny Holy Communion to any of Christ’s faithful solely on the grounds, for example, that the person wishes to receive the Eucharist kneeling or standing.

[92.] Although each of the faithful always has the right to receive Holy Communion on the tongue, at his choice, if any communicant should wish to receive the Sacrament in the hand, in areas where the Bishops’ Conference with the recognitio of the Apostolic See has given permission, the sacred host is to be administered to him or her. However, special care should be taken to ensure that the host is consumed by the communicant in the presence of the minister, so that no one goes away carrying the Eucharistic species in his hand. If there is a risk of profanation, then Holy Communion should not be given in the hand to the faithful. - Redemptionis Sacramentum

Even though the Federation of North American Explorers may have Vatican approval, it is not clear if their ”rule” for receiving communion is a norm of their constitutions or simply a custom adoptive of the FNE. I presume this question is dealing with the Ordinary Form of the Mass.

Some have called attention to our custom of receiving Holy Communion in this way by alleging that it is less than obedient to the directives of our bishops. We always strive to be obedient to our Holy Father the Pope and the bishops in communion with him. In the United States, the 2002 edition of the General Instruction of the Roman Missal (GIRM) stated in paragraph 160:

The norm for reception of Holy Communion in the dioceses of the United States is standing. Communicants should not be denied Holy Communion because they kneel. Rather, such instances should be addressed pastorally, by providing the faithful with proper catechesis on the reasons for this norm.

However, GIRM was revised (the current edition dates from 2011) in accordance with the instruction Redemptionis Sacramentum, paragraph 91, which states, in part, “it is not licit to deny Holy Communion to any of Christ’s faithful solely on the grounds, for example, that the person wishes to receive the Eucharist kneeling or standing.” The relevant paragraph of GIRM now states:

The norm established for the Dioceses of the United States of America is that Holy Communion is to be received standing, unless an individual member of the faithful wishes to receive Communion while kneeling (Congregation for Divine Worship and the Discipline of the Sacraments, Instruction, Redemptionis Sacramentum, March 25, 2004, no. 91).

USCCB – General Instruction of the Roman Missal, Chapter 4 (scroll down)

Paragraph 160 in the Canadian edition of GIRM is similar:

In the Dioceses of Canada, Holy Communion is to be received standing, though individual members of the faithful may choose to receive Communion while kneeling.

Please click here for a detailed explanation of why our youth and adult members receive Holy Communion this way. - Federation of North-American Explorers

Some of their website photos seems to be like that the Mass of Pope St. Pius V! (One can not see the Mass Cards on the altar, but at times they are laying flat on the altar.) Even then communion can not be denied to a communicant who stands and/or receive on the hand. 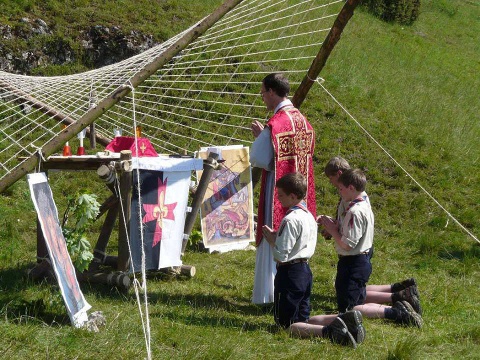 As we all know, communion in the Extraordinary Form of the Mass in given to the faithful while they are kneeling and on the tongue. That stated, it is the norm in the Tridentine Rite as well as being the traditional way of receiving communion.

A Benedictine abbot, (who himself says the Mass of Pope Pius V) once told a group that it is not lawful to deny any person receiving communion on the hand while attending the Old Mass. However, in our day and age, this actually happens. What the Fr. Abbot told the group of traditionalists is that it would be a worth while incentive to simply ask the communicant if he or she would not mind receiving communion according to the practice of the Extraordinary Form of the Mass. If the communicant agrees to it, bravo. If he does not agree to it he should not be denied Holy Communion. Most will understand and receive communion kneeling and on the tongue.

Then again some people simply can not kneel down due to some physical ailment. Are they denied communion? The answer is is no, in both Rites of the Roman Liturgy.

In the long run the faithful will respect Sacred Traditions if explained properly.

All said and done the FNE liturgical custom does not have the force of law to insist that communicants must receive Our Lord in the Sacred Host according to their own viewpoint of how communion should be received within their group settings, if the Mass of St. Paul VI is employed.

Not the answer you're looking for? Browse other questions tagged catholicism communion canada or ask your own question.