Pilate also had an inscription written and put on the cross. It read, “Jesus of Nazareth, the King of the Jews.” Many of the Jews read this inscription, because the place where Jesus was crucified was near the city; and it was written in Hebrew, in Latin, and in Greek.

My question is: is there any denomination which uses the full text of the inscription that Pilate placed on the Cross of Jesus, in the crucifix used by it ?

First of all, there are several denominations that have the tradition of have of displaying crucifixes in their church, such as Catholics, Eastern Orthodox, Anglicans and Lutherans. Although these churches have crucifixes in them, the vast majority of these works of art, simply have the abbreviated form of Titulus on the cross.

There is nothing contrary to having a crucifix with the full title within these denominations. It simply is not the prevailing custom of any denomination.

That said, if one looks hard enough, someone will eventually find a few churches here and there that display a crucifix with the full title of Christ’s condemnation, in various Christian denominations throughout the world.

Here is just one example of a crucifix with the full title which I found in a Lutheran church. 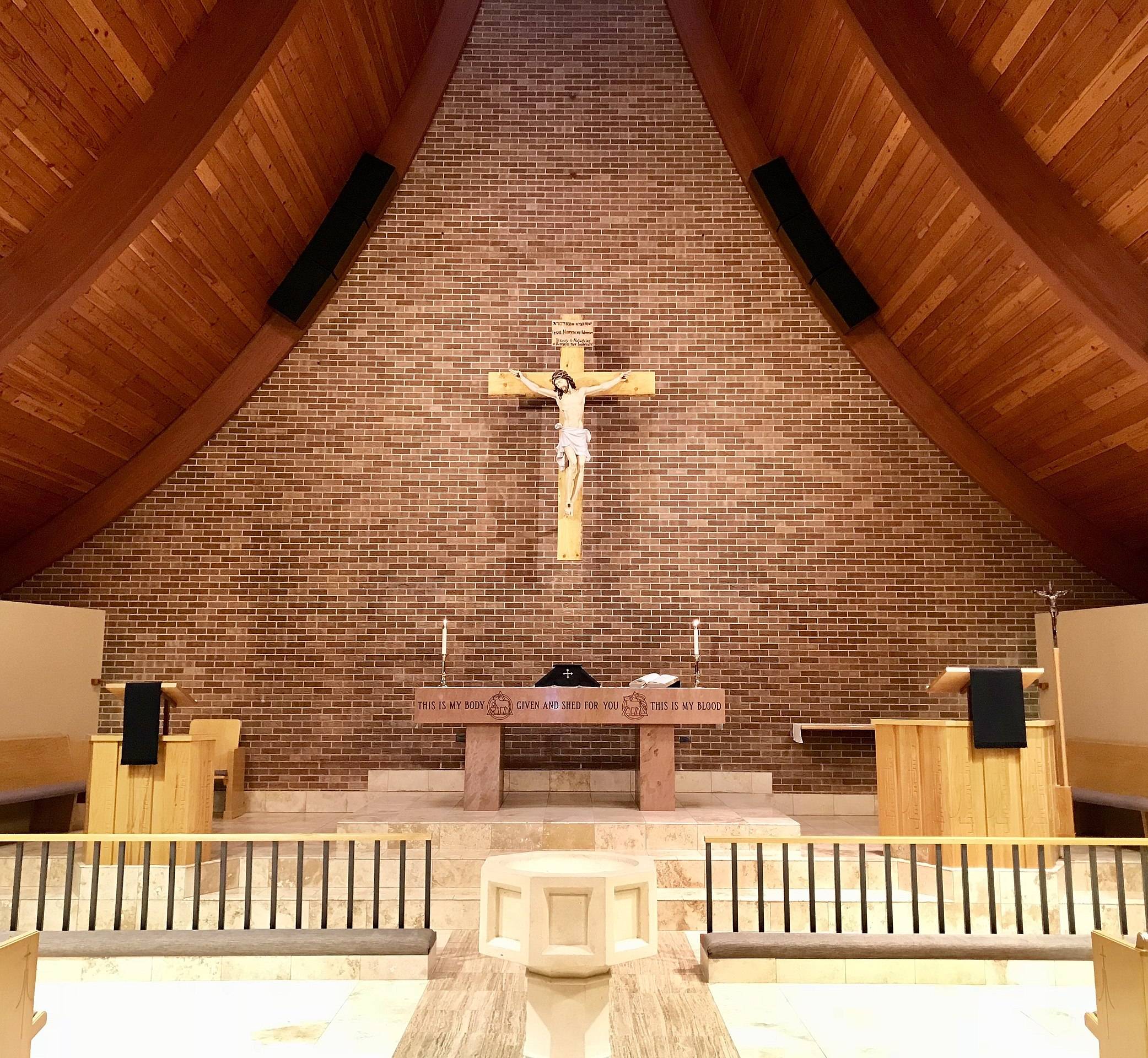 A crucifix in the chancel of a Lutheran church.

With a little more research I am confident one could find more examples in other denominations as well.

The Latin title, being the official indictment, would undoubtedly have been written first on the board. This then would have determined the length of the board and/or the size of the letters required to fit the inscription into one line and for it still to be readable by the crowd from a distance (John 19:20).

In those days they did not use spaces between the words in any of the languages as we do now, and so John's Latin “title” contained just 26 letters and no spaces.

Luke's Greek “superscription” contained 30 letters, and so must have been written in slightly smaller letters than was the Latin. It is easy to see that there would not have been room for 16 more letters for the words “Jesus of Nazareth” (i.e. “Jesus the Nazarene”) in Greek.

Matthew's “accusation” in Hebrew contained just 19 letters, which is rather fewer than the two other languages, because the Jews did not write vowels in Hebrew. Whoever translated the title into Hebrew apparently did not think it worth adding “of Nazareth.” Perhaps he thought that to have lived in Nazareth was not an indictable offense!

If we put all of this together, it is highly probable that the board with the inscriptions looked as shown above, with the Latin written first, probably at the top, and then either the Greek or the Hebrew. - The inscription(s) on the cross

Not the answer you're looking for? Browse other questions tagged gospel-of-john denomination-survey tradition art crucifix or ask your own question.

3
Why did Pilate insist on writing 'Jesus of Nazareth, King of the Jews'?
9
According to the Gospel of John, on which day of the week was Jesus crucified?
2
Do Matthew and John have a discrepancy with regards to Jesus before Pilate?
8
What evidence exists to support church traditions regarding the deaths of the following apostles?
0
Do any Christian denominations consider Pontius Pilate as a saint?
7
Why did the Jews comment that Jesus was not yet fifty years of age?