What did the earliest version of the Vulgate bible look like?

It seems that the Codex Amiatinus is the oldest most complete version of the Vulgate bible (which misses the Book of Baruch). What did it look like? 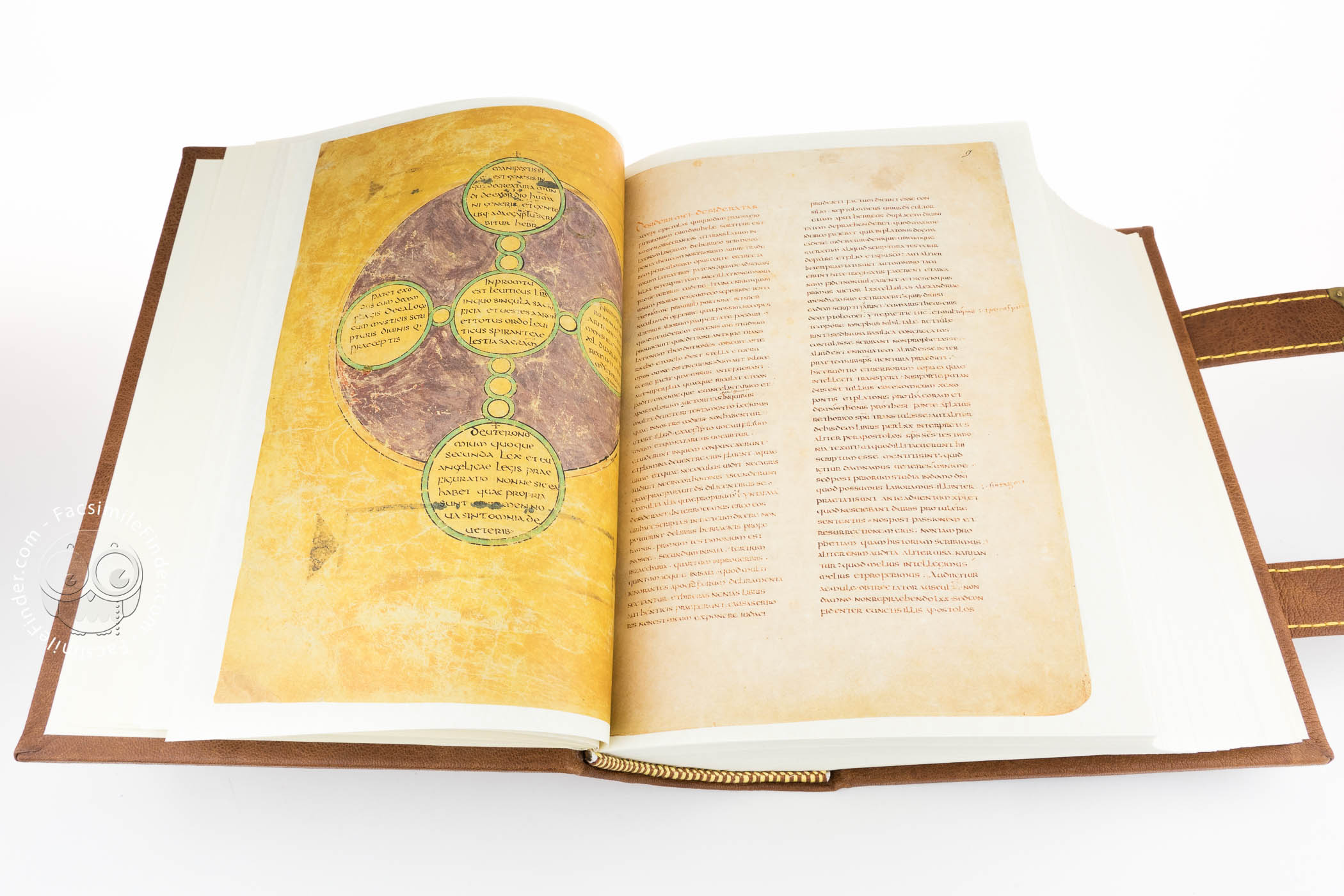 Looking up close at the blurry images, the text looks like the Insular style script which was used around the 700's in Northumbria. The text on the right page looks like it is devoid of verse markers, chapter markers, and page markers. But it does look like there is primitive punctuation like spacing between words and possibly periods though I can't quite see clearly enough.

According to this site, it was Robert Stephens' Greco-Latin Testament of 1551 which established our current "verse divisioned" bible. Though I'm not sure if this means no verse divisions were present in bibles before. Primitive chapter divisions may have been present in the mid to late 1200's.

But I'm confused on dates (first part of question). Wikipedia says about the Vulgate Bible that it is from the 300's. This Book of Durrow is said to have been created around 700. According to Wikipedia's Biblical Manuscripts page, the Septuagint (Greek) is from around 200, while the Vulgate is from the 400s, the Codex Amiatinus being the first complete Vulgate in the 700s. How does this relate to the Book of Durrow? Same font, I can see that, was it the same author? Those are tangent questions.

According to etymonline, the Vulgate was first completed in 405 by St. Jerome (c.340-420). So then we only have a partial copy of this from piecing together the articles, since this was centuries before the Codex Amiatinus.

Interestingly, sort of side note, vulgate comes through the Medieval Latin vulgata, fem. past participle of vulgare "to make common or public; to spread among the multitude", from vulgus "the common people". The Vulgate bible wasn't "confirmed" by the Catholic Church as the "official" Latin Bible until the Council of Trent in the mid 1500s.

So from my understanding, the "Vulgate" ...

...translation was largely the work of Jerome, who in 382 had been commissioned by Pope Damasus I to revise the Vetus Latina ("Old Latin") Gospels then in use by the Roman Church.

The Codex Amiatinus was a version of the Vulgate written in Northumbria using the Irish-inspired Insular script. Thus, the original Jerome Vulgate probably didn't look like this. The Wikipedia page for "Vulgate" shows an image of The Malmesbury Bible: 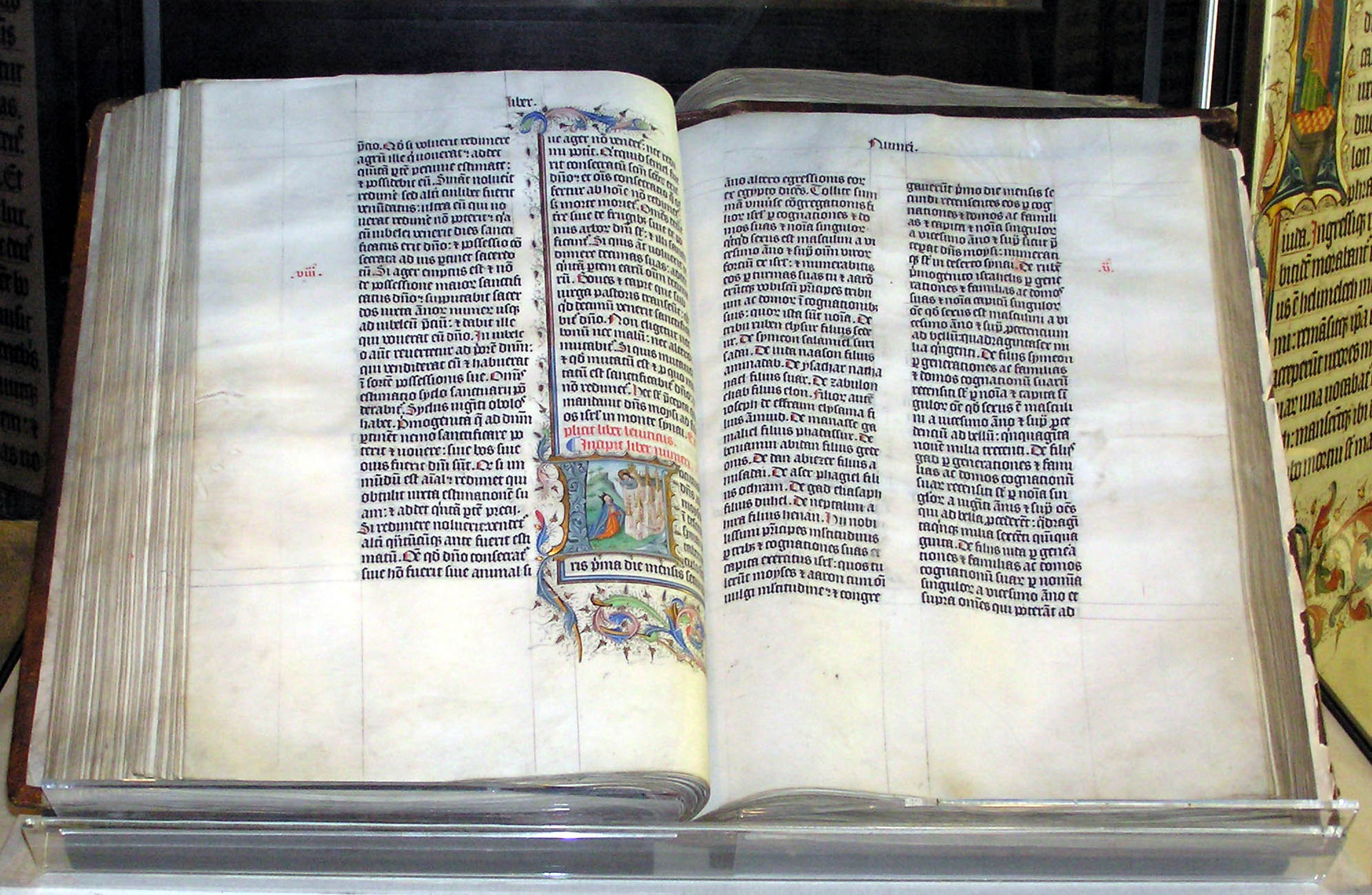 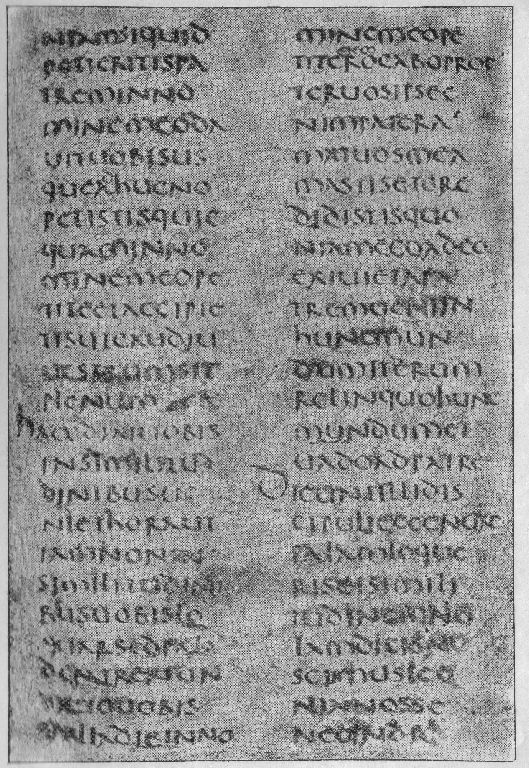 No punctuation whatsoever, justified text, all caps, no spaces, etc. Not sure what font (would love to know!). Looks like the Uncial script.

There is no single "Vetus Latina" Bible. Instead, Vetus Latina is a collection of biblical manuscript texts that are Latin translations of Septuagint and New Testament passages that preceded Jerome's Vulgate.

So should I assume that Jerome wrote the original Vulgate bible to look exactly like the Vetus Latina manuscripts at the time? Or is there an image online in a digital museum showing one of Jerome's original manuscripts?

Basically I would like to know what font, and what punctuation is used in the earliest Vulgate version. I know that by the 700's the complete copy of Codex Amiatinus was written in Insular script (Latin), with some primitive punctuation, but not exactly sure if they used periods or capital words. I think yes to periods, no to paragraphs, no to verses or chapters, and no to capital words. But before Codex Amiatinus, I am not sure if the Vulgate from Jerome looked like the Vetus Latina, or something else. Looking forward to an explanation, specifically of this bible's typography:

Browse other questions tagged manuscript latin latin-vulgate jerome or ask your own question.

12
How did Augustine of Hippo feel about Jerome's Latin translation of the Bible (the Vulgate)?
8
What was Jerome's defense for translating the Hebrew word קִיקָיוֹן (kikayon) in Jonah 4:6, etc. into Latin as hedera?
11
Does the Pope's encyclical Laudato si' have a Latin version?
4
How is the Vulgate rendering of Romans 5:12 explained (Roman Catholic perspective)?
1
Earliest use of the term triune
4
What's the Greek manuscripts of John with the oldest discovery date?
1
How do Catholic theologians reconcile homoousion with the vulgate translation of Hebrews 1:3?
2
What did the original Christian writings look like during the 1st century CE?
2
Are Catholics allowed to entertain that the Old Vulgate might contains errors?
4
Why did St. Jerome place Peter's letters after James's letter if Peter was the leader of the apostles and the church?