Are there any saints or mystics who had a vision of hell, and based on that made a judgment about how many people are in hell? (Catholic perspective)

Are there any saints and/or mystics who had a vision of hell, and based on that made a judgment about how many people are in hell (the majority, a minority, or some judgment like that)?

The majority of mystics and saints who have had visions of Hell, believe that the majority of souls go to Hell. But this is neither absolute or known and is often based on their personal interpretation of their visions. The truth is we do not know.

And so it is that we are presented with quite a disconcerting appraisal as foretold by some of the Saints and Mystics of the Church! Yet, it should be noted that other Saints and Mystics have been considerably more lenient in their assessment of the proportion of those saved.

However, for the "other side of the coin", lets take Sr. Josefa Menedez, for example. Jesus reportedly said to her:

"Oh, all you who are steeped in sin, and who for a time more or less long have lived as wanderers and fugitives because of your crimes ... if the offences of which you have been guilty have hardened and blinded your hearts . . . if to grant satisfaction to one or other of your passions you have sunk into evil ways ... Ah! when the motives or accomplices of your sin have forsaken you, and you realize the state of your soul, oh then, do not yield to despair! For as long as a breath of life remains a man may have recourse to mercy and ask for pardon.

"If you are still young, if already the scandals of your life have lowered you in the eyes of the world, do not be afraid. . . . Even if there is reason to treat you as a criminal, to insult and cast you off . . . your God has no wish to see you fall into the flames of hell. ... On the contrary He ardently desires you to come to Him so that He may forgive you. If you dare not speak to Him, at least look at Him and let the sighs of your heart reach Him, and at once you will find His kind and fatherly hand stretched out to lead you to the springs of pardon and life.

"Should it happen that you have spent the greater part of your life in impiety and indifference, and that the sudden approach of the hour of death fills you with blinding despair . . . Oh! do not let yourself be deceived, for there is still time for pardon. If only one second of life remains to you, in that one second you can buy back eternal life!" (Words of Jesus to Sr. Josefa Menendez)

And this author would certainly be remiss if in this discussion I did not mention the extraordinary private revelations concerning Divine Mercy given to the Polish nun, St. Faustina Kowalska. One could quote literally HUNDREDS of statements of Jesus given to her concerning His infinite mercy and forgiveness towards sinners, but this one is a good representation:

"Today I am sending you [Sr. Faustina] with My mercy to the people of the whole world. I do not want to punish aching mankind, but I desire to heal it, pressing it to My merciful Heart. I use punishment when they themselves force me to do so; My hand is very reluctant to take hold of the sword of justice." (Jesus to St Faustina Kowalska)

Nevertheless, all the quotes and mystical private revelations above are subject to fallibility, meaning that no mortal man knows for sure the proportion of those who go to heaven vs. hell. The Saints and Mystics in the quotes above are simply giving their perspectives and opinions based on their studies, or in some cases simply relating their mystical experiences. And concerning mystical experiences of hell, some mystics like St Faustina, St Veronica Giuliani and Sr. Josefa Menendez was were notorious for being taken in spirit on numerous trips to hell, while the children visionaries of Fatima were given a very chilling vision of hell, as were many other Mystics and Saints. And concerning her visits to hell, St Faustina wrote in her Diary:

"I, Sister Faustina Kowalska, by the order of God, have visited the abyss of Hell so that I might tell souls about it, and testify to its existence...the devils were full of hatred... It is a place of great torture."

And speaking of Fatima and hell, it is worth remembering that at Fatima we were taught by Heaven itself (by an Angel) to pray, 'Oh my Jesus, forgive us our sins. Save us from the fires of Hell. Lead all souls to Heaven, especially those who are most in need of Thy mercy.' - Percentage of souls who go to heaven vs. hell. How many are saved?

The percentage of souls that are saved are based on personal interpretation of their own visions.

St. Padre Pio often battled the Devil in his life.

The devil, as you know, is a great architect of iniquity. He knows this all too well. Seeing that in you such a desire is much alive, he could try to trick you with some illusion and diabolical apparition, as an angel of light. This wretched apostate even knows how to disguise himself as a Capuchin monk and can play his role very well. Believe it, I beg of you, from someone who was subjected to a similar experience. It is enough for now that which I have said about this point. To me, it seems that I have said more than that which prudence would have requested... You wage war also with Satan, both directly – with his evil suggestions, and indirectly – by means of the world and our corrupt nature. Make this wretched apostate clamour – threatening at times even to swallow you. It does not matter. He can do nothing against your soul, which Jesus has already embraced close to Himself.” - Saint Pio of Pietrelcina

Most visionaries will say that there are many souls in Hell, but few will venture to say that most souls (or few for that matter) are damned to eternal punishment based on their own private revelations. Furthermore, St. Padre Pio actually believed that the majority of souls were saved.

"I believe that not a great number of souls go to hell. God loves us so much. He formed us at his image. God loves us beyond understanding. And it is my belief that when we have passed from the consciousness of the world, when we appear to be dead, God, before He judges us, will give us a chance to see and understand what sin really is. And if we understand it properly, how could we fail to repent?" - Close encounters of a special kind with Padre Pio: The Souls in Purgatory, The Guardian Angel, the devil.

More information may be gleaned from the following articles: 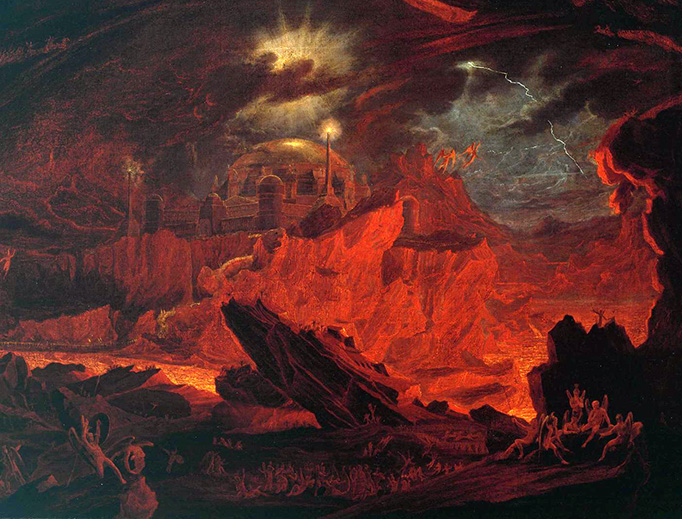 “You have seen hell where the souls of poor sinners go. To save them, God wishes to establish in the world devotion to my Immaculate Heart.” (John Martin, “Fallen Angels in Hell”, ca. 1841)

St Veronica Guiliani said that during her 2 hours visit to hell, that souls were falling into like a non stop heavy rain.

Not the answer you're looking for? Browse other questions tagged catholicism eschatology heaven saint mysticism .

7
Do saints and church fathers generally make the claim that most people go to a hell of everlasting torment?

21
What is the endgame for sedevacantists?
7
Did the Saints commit mortal sin sometimes?
2
In Catholicism, what are the arguments for the reasonableness (see body) of an eternal hell?
6
Can a Pope elevate a non-heretical yet minority opinion to the level of dogma?
7
Do saints and church fathers generally make the claim that most people go to a hell of everlasting torment?
2
Are there any Catholic saints or notable theologians that have interpreted 666 in the manner as explained below?