Did Jesus defend himself at his trial?

Jesus's prayer in the garden, where he asks God for this cup to pass from him, seems to imply that Jesus did not want to die. In the gospel of John, Jesus gives a defence to Pilate, "My kingdom is not of this world". That seems like an effective defence, because it convinced Pilate that Jesus was innocent.

Despite this, a popular belief in Christianity is that Jesus did not defend himself and was in fact deliberately trying to get himself killed. This raises some questions for me:

An alternative theory I am exploring is that Jesus did not want to die, and did attempt to defend himself to a morally permissable degree which would render him not responsible for his death, i.e he was killed by circumstances beyond his control. Are there any defences of this theory, either in church history of by contemporary scholars?

Did Jesus defend himself at his trial?

The biblical answer is No. Jesus was silent during the hour of trial and not uttered a word that would appear trying to defend himself. Remember Jesus came into this world exactly to offer His life as a victim to atone for the sins of all mankind.

The phrase you cited as "My kingdom is not of this world", is not an effective defense but Jesus was clearing to Pontius Pilate his wrong understanding about His Kingship but in no way defending Himself. Jesus just made it clear to Pontius Pilate the His Kingdom is not the earthly kingdom that he knew and is serving. Jesus is not like Caezar, so there's no threat that he is planning to overthrow Caezar, and so Pilate had seen no threat and find him innocent of the charges of rebellion.

Despite this, a popular belief in Christianity is that Jesus did not defend himself and was in fact deliberately trying to get himself killed. This raises some questions for me:

1.How is this belief reconciled with the aforementioned scene in John?

Jesus did not deliberately trying to get killed himself, Jesus is following the Will of God written in Genesis1:1. The mystery Hebrew word is "Bereshit".

"The Son of the Almighty God willingly offered His life to die on the Cross to poured out the merciful graces of God to atone for the sins of mankind." Mercy and Graces is the meaning of the "Way of the Cross" as shown in the image below. And Mercy & Graces is the means God had given us to restore back Divine Life in us that will lead us to follow the path towards salvation to enter God's Kingdom.. 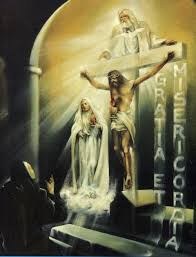 Gratia et Misirecordia or Graces and Mercies. This last vision of Sis, Lucia depicted the visual image of the Hebrew word "Bereshit" written in Genesis1:1.

Jesus offering Himself as the "victim" must die "At the Foot of the Cross", if he is deiberately trying to get killed He will not reach Calvalry. And if Jesus died before reaching the Foot of the Cross, then how can He pour out "the blood & water which gushed forth from His side as a fountain of mercy for us". (Sr.Faustina diary").

The answer can be found in Jesus own words; Jesus knew His mission and He knew that He must follow the Will of God in the salvation of man written in Genesis1:1, it's called the "Way of the Cross".

"For I have come down from heaven not to do my will but to do the will of him who sent me."(John6:38)

3.Wouldn't Jesus trying to get himself killed conflict with the claim that he was obedient unto death? I.e it would seem to eliminate death as a cost of his obedience because the cost is self inflicted.

Jesus were not trying to get himself killed, but putting His complete trust in His Father's Will by being obedient even unto death, even death on the Cross.

Lastly, to answer your final question;

An alternative theory I am exploring is that Jesus did not want to die, and did attempt to defend himself to a morally permissable degree which would render him not responsible for his death, i.e he was killed by circumstances beyond his control. Are there any defences of this theory, either in church history of by contemporary scholars?

The alternative theory was not found in the gospel of Christ as Jesus words is very clear saying that He is the Good Shepherd in John10:11-18

14 “I am the good shepherd; I know my sheep and my sheep know me— 15 just as the Father knows me and I know the Father—and I lay down my life for the sheep. 16 I have other sheep that are not of this sheep pen. I must bring them also. They too will listen to my voice, and there shall be one flock and one shepherd. 17 The reason my Father loves me is that I lay down my life—only to take it up again. 18 No one takes it from me, but I lay it down of my own accord. I have authority to lay it down and authority to take it up again. This command I received from my Father.”

In closing, Jesus did not tried to deliberately allowed his executioners to killed Him, because as He said it clearly;

The executioners no matter how cruel they are they cannot take away the life of Jesus the "Author of Life", but Jesus words highlighted His Redemptive MIssion by saying "This command I received from my Father". Jesus is following the Commandment or the Will of God up to His last breathe.

"...Then Jesus called out in a loud voice, “Father, into Your hands I commit My Spirit.” And when He had said this, He breathed His last." (Luke23:46)

Jesus had shown "At the Foot of the Cross" that although He had suffered ignominiously from the hands of his executioners, Jesus is very much in control when He is going to breathe His last. Jesus is in control of His death, and no one take away His life but He freely lay it down to all of us to Redeem all mankind.

Not the answer you're looking for? Browse other questions tagged crucifixion words-of-jesus atonement .

9
Why is Pontius Pilate blamed for killing Jesus in the Apostles' Creed?
7
What is the earliest reference to the notion that we killed Jesus?
9
What is the biblical basis for the belief that Jesus' death made satisfaction for individual sins?
7
What are the predominant Christian views on whether Jesus had to specifically die by crucifixion? Could he have chosen another kind of death?