What is the meaning of the stained glass above the altar at Votivkirche in Wien with the Portuguese Quinas on it?

I would like to know more information on a glass painting I found in the church Votivkirche in Wien (Vienna, Austria). Above the person with the shield there is the symbol of the Portuguese Quinas.

Is there a reason / story about this?

I was able to find a plan of the church (not sure if it is the same as today), on this website.

I think the location is the one on the left side that says "kapelle". 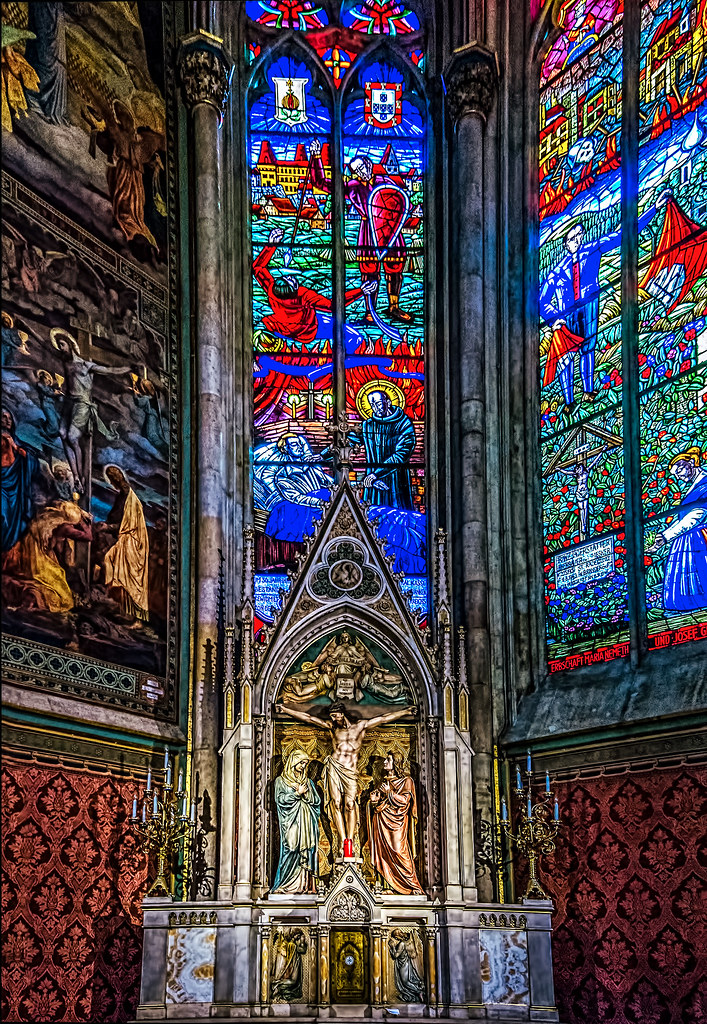 What is the meaning of the stained glass above the altar at Votivkirche in Wien with the Portuguese Quinas on it? 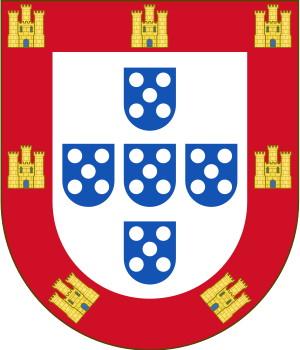 The Portuguese Quinas or Coat of arms of Portugal (1481-present) can be seen in the Votive Church in Austria known as Votivkirche. It can be be seen in Vienna, Austria.

This is a votive church and as such was constructed in order to fulfill a vow or in gratitude for some grace(s) obtained or thanksgiving of some sort.

The Votivkirche (Votive Church) is a neo-Gothic church located on the Ringstraße in Vienna, Austria. Following the attempted assassination of Emperor Franz Joseph in 1853, the Emperor's brother Archduke Ferdinand Maximilian inaugurated a campaign to create a church to thank God for saving the Emperor's life. Funds for construction were solicited from throughout the Empire. The church was dedicated in 1879 on the silver anniversary of Emperor Franz Joseph and his wife Empress Elisabeth.

The origin of the Votivkirche derives from a failed assassination attempt on Emperor Franz Joseph by Hungarian nationalist János Libényi on 18 February 1853. During that time, when the Emperor was in residence at the Hofburg Palace, he took regular walks around the old fortifications for exercise in the afternoons. During one such stroll, while walking along one of the outer bastions with one of his officers, Count Maximilian Karl Lamoral O'Donnell von Tyrconnell, the twenty-one-year-old tailor's apprentice attacked the twenty-three-year-old Emperor from behind, stabbing him in the collar with a long knife. The blow was deflected by the heavy golden covering embroidered on the Emperor's stiff collar. Although his life was spared, the attack left him bleeding from a deep wound.

A civilian passer-by, Dr. Joseph Ettenreich, came to the Emperor's assistance, and Count O'Donnell struck Libényi down with his sabre, holding him until the police guards arrived to take him into custody. As he was being led away, the failed assassin yelled in Magyar, "Long live Kossuth!" Franz Joseph insisted that his assailant not be mistreated. After Libényi's execution at Spinnerin am Kreuz in Favoriten for attempted regicide, the Emperor characteristically granted a small pension to the assassin's mother.

Dr. Ettenreich, who quickly overwhelmed the attacker, was later elevated to nobility by Franz Joseph for his bravery, and became Joseph von Ettenreich. Count O'Donnell, who up until then was a count in the German nobility by virtue of his great-grandfather, was afterwards made a Count of the Habsburg Empire and received the Commander's Cross of the Royal Order of Leopold. His customary O'Donnell arms were augmented by the initials and shield of the ducal House of Austria and also the double-headed eagle of the Empire. These arms are emblazoned on the portico of No. 2 Mirabel Platz in Salzburg, where O'Donnell later built his residence.

After the unsuccessful assassination attempt, the Emperor's brother, Maximilian — later Emperor of Mexico — called upon communities throughout the Austria-Hungary Empire for donations to a new church on the site of the attack. The church was to be a votive offering for the rescue of Franz Joseph and "a monument of patriotism and of devotion of the people to the Imperial House." - Votivkirche, Vienna

I do not believe there is a real story as to why the Portuguese Quinas is placed in one of the stained glass windows of this church.

The Portuguese nation simply made a substantial donation to the construction of the edifice and because of this act the Emperor permitted that the Portuguese Quinas could be displayed in this church as an Ex-Voto.

I know this sounds too simple of an explication, but it a very traditional way of thanking donors. I have seen many plaques in churches displaying the names very important donors for their generosity, even at the bottom and within of some stained glass windows. The Portuguese Quinas is simply another way for the Austrian Emperor to thank the Portuguese nation.

The neo-Gothic church is located on Vienna's Ringstrasse and was consecrated in 1879, on the Silver Jubilee of Emperor Franz Joseph and Empress Elisabeth. A failed assassination attempt on the Emperor was the inspiration for its construction. To finance the church, the Emperor’s brother, Archduke Ferdinand Maximilian, appealed for donations “in gratitude for the sparing of His Majesty”. The Votive Church, also called “Ringstrasse cathedral”, is one of the most significant buildings of the European Historicism period. It contains a museum displaying the “Antwerp Altar”. This church is of particular interest for visitors of Vienna, since the service is held in different languages each Sunday at 11:15 am. - 7 most impressive Churches in Vienna

Not the answer you're looking for? Browse other questions tagged church-history history art or ask your own question.

11
Where was Jesus' tomb?
9
What is the earliest point in history where the cross icon started showing up on artifacts related to Christianity?
7
Was Billy Sunday the first evangelist to equate the "altar call" with salvation?
11
Why does a beheaded saint have the halo above the stump?
5
Hierarchy of Catholicism, government, and papal teaching
4
Does Stained Glass art hold any special meaning for Catholics?
4
In Canada, is it true that when Mormons first arrived (1887) they weren't allowed to settle within 50km of Lethbridge?
4
Did the original reformers believe in a Magisterium?
3
Is every single minute of the year a mass being celebrated in the Roman Catholic Church? If so, since when?
5
What is the meaning behind this coin of Pope St. John Paul II?