The "eye of the needle gate" today

There is a great set of answers that covers some of my question regarding the interpretation of this passage over on the Biblical Hermeneutics site, but it didn't answer all of my questions.

Today I heard an old pastor speak about when he saw one of those gates for himself in Jerusalem. If I understand it right, the gate he saw was even labeled with "The eye of the needle" or something similar (though his interpretation was not the classic, because he was sure of that there was no way a camel could get through the gate he saw).

Even since before asking this question, I never doubted that Jesus was speaking about a real "eye of the needle", and not a gate. Even though I marked one answer (which was really clarifying) as accepted, it would be really interesting to nail this myth and go down to the details. According to the New Bible Dictionary, third Edition, p. 562, there is one remaining ancient wall "at the present-day Damascus Gate". What does "ancient" mean in this context? Could it have survived since the days of Jesus? In that case, how big is this part? Are there other ancient walls that could be from the days of Jesus? And are there any "gates" in these ancient walls that have been suggested as the "needle eye gate"?

Minor clarification. While the Temple of Jerusalem was destroyed in 70AD, the city of Jerusalem retained its general street plan until 135 AD. In 135 AD, after the Bar Jakova Revolt, the already damaged city was razed to the ground. In its place, a Greek city called Aelia Capitolina was put in its place.

As such, when Constantine's mother, Helena visited the city in the 300s, there was nothing left, except new settlements which bore no relation to the extant city. This why Golgotha, for example - the outskirts of the town in the day - are, if you believe Helena, now inside the Church of the Holy Sepelchure, smack dab in the center of the city.

Indeed, the city itself has migrated over time. The "City of David," extends south of the current city walls. That one would now exit the "Dung Gate" to go to where David's palace was shows how fluid city layouts can be.

The Temple, which was at the northern end of the city, is now central to it. The "beautiful gate" (or the "Golden Gate", next to the Temple) was sealed off in 1541, and most of the existing walls date to the Ottomans, built in the 1500s. 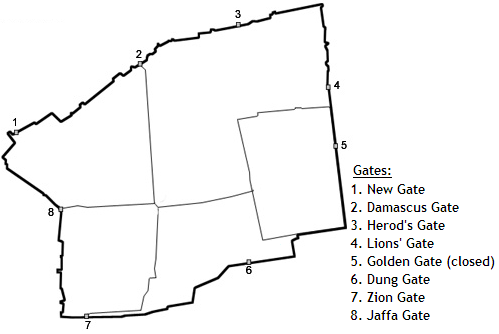 As such, if there ever was an "eye of the Needle" gate, (which in my mind is highly doubtful) it certainly no longer exists today. Additionally, any understanding of where the gate was in relationship to the city would be of no use, because there is no context for it.

The Damascus Gate has been the historic main entrance to the city. The actual edifice, however dates to 1547, and was built on the ruins of a 2nd Century AD gate,

Not the answer you're looking for? Browse other questions tagged history archaeology jerusalem or ask your own question.

23
Why was taking census a bad thing?
6
Why and when did allegorical interpretations of Scripture lose their appeal?
11
Where was Jesus' tomb?
7
Did the city of Nazareth exist in the time of Jesus?
4
How is the ‘Resurrection of the Holy Ones’ in Mt.27:51-53 understood by those who consider it a literal, historical event?
8
Did some Christian sects ever hold the opinion that ritual slaughter was obligatory, before the 10th century?