Are there any examples where the non-believers demanding a miracle for the proof of Catholic faith and a saint succeeding in performing it?

Questions: Are there any examples where the non-believers demanding a miracle for the proof of Catholic faith and a saint succeeding in performing one?

I am looking for those kinds of examples, especially if they were performed by a saint.

On more than one occasion, at Fanjeaux and Montréal, in order to resolve theological disputes between Albigensian heretics and Catholics, the Albigensians challenged St. Dominic to throw his book in the fire and they'd throw theirs in, too, and whoever's books remained unscathed would contain the truth. St. Dominic's book immediately jumped out of the fire unscathed, and the heretics' burned. St. Dominic's book is said to have defended the Immaculate Conception.

Here is how Bl. Jordan of Saxony, O.P., recounts it in his biography of St. Dominic, the Libellus: 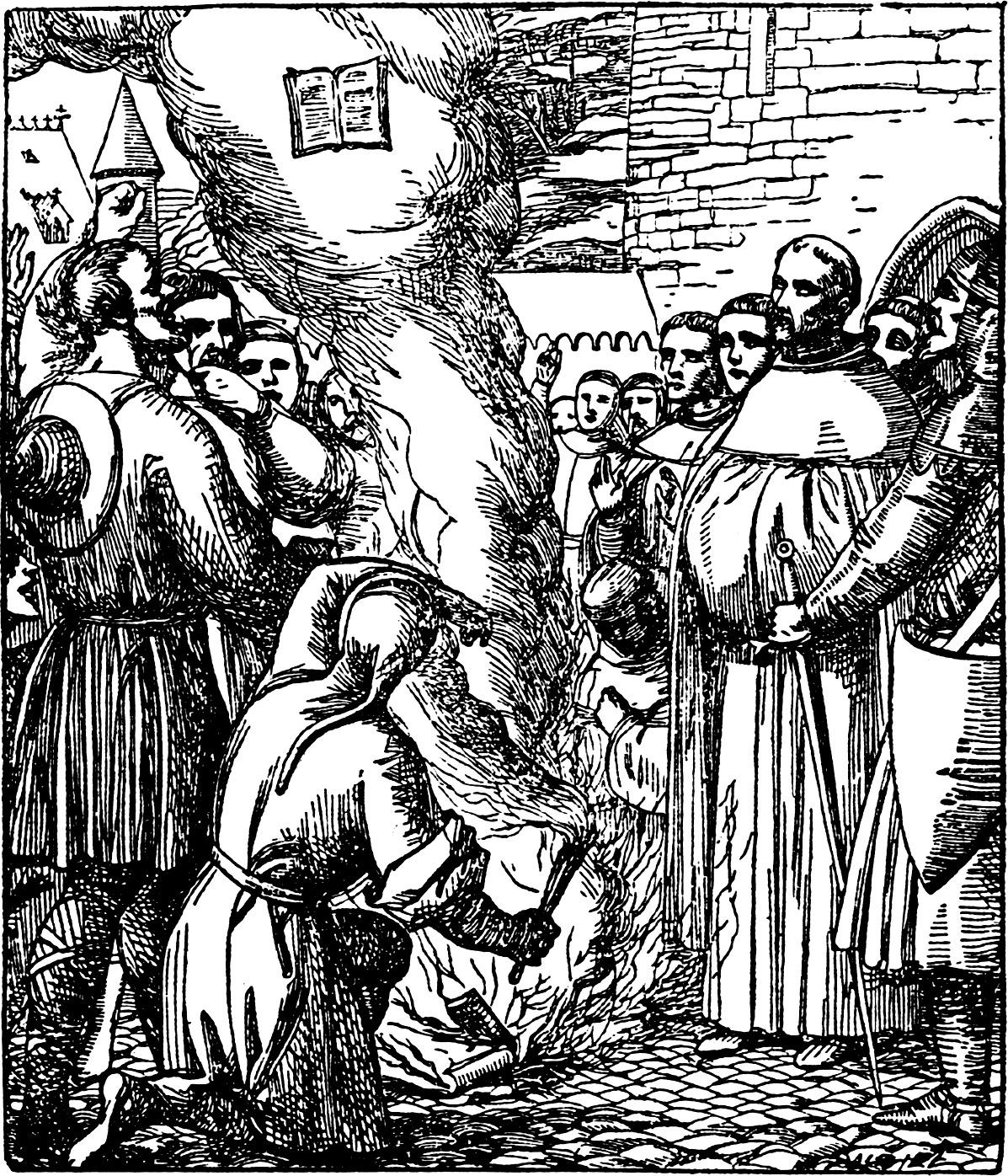 The trial by fire: the writings of the Albigenses are consumed in the flames, while St. Dominic’s book on the Flesh of Christ is miraculously borne safely away in the presence of the whole assembly. (See pages 18 and 236 [of Sr. Drane's biography of St. Dominic]). In this book St. Dominic affirmed the Immaculate Conception of the Blessed Virgin Mary.

Are there any examples where the non-believers demanding a miracle for the proof of Catholic faith and a saint succeeding in performing one?

There is the famous story of St. Anthony and the donkey!

St. Anthony and the Donkey that Bowed to the Eucharist

The story of St. Anthony with the donkey is also a well known one. St Anthony worked hard to convert those who did not believe in the Real Presence of Jesus in the Eucharist because he genuinely felt sorry for them. He saw that they were depriving themselves of the most precious gift of the Eucharist, and he believed that no one could long survive without this spiritual nourishment. One day, a nonbeliever told Anthony that he would believe that Christ was truly present in the Eucharist only if his mule bowed down to it. They established that the test should take place in three days. The heretic starved his mule for the next three days.

When the appointed time had arrived, Anthony stood off to one side with the consecrated host in his hands, while the heretic stood to the other holding some fodder for the mule to eat. The mule ignored the fact that it was starving and it went over before the Eucharist and knelt down to adore the Blessed Sacrament. This is the scene portrayed in this statue. 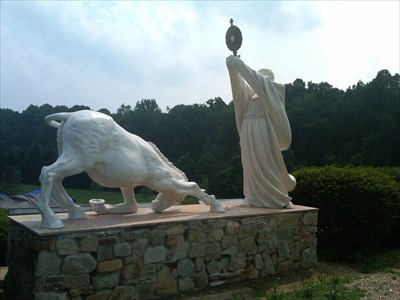 Sometimes it is to be careful of what you ask because God may eventually answer you.

In 1903, when Alexis Carrel was thirty years old he was already a famous scientist. He had the opportunity to go to Lourdes, with a train filled with sick people. He Accepted with enthusiasm because, as a scientist, he wanted to seriously examine the sick, to see if there were really such changes told by stories of Lourdes, what they called "miracles." During the train journey he was entrusted with the care of a young woman, Marie Bailly, who had been ill with tuberculous peritonitis; she was very ill, so much so that it was feared that she would die during the journey. He disdained the fanaticism of pilgrimages, the priests, asleep in their blessed faith . During the journey, he had discussions on the phenomenon of Lourdes and its miracles. At the end of one of this discussion, he talked about Marie Bailly and concluded: "She is in a dramatic state, I have already given her injections of caffeine. I am afraid that she will die in my arms: if this sick woman is healed, it would be a miracle. I would believe in everything and I would enter a friars community.".

In front of the Grotto of the Apparitions,the patients, at two in forty in the afternoon, were arranged in order, accompanied by songs and invocations. Alexis Carrel had in front of him, just ahead, the stretcher with Marie Bailly, who was going through a remarkable change: The bruises were gone, she was less pale ... The good sisters had, a few minutes earlier, taken her to the pools. But did not want to immerse her; she had been restricted to a few washes in the stomach. Alexis himself, in the third person, described what was happening before his eyes, while Marie Bailly was being healed right in front of him: "He could see a clear and fast improvement. Leaning on the balustrade, all his faculties focused on Marie Bailly, not looking at anything but her ... and more the face of Marie continued to change, and her eyes were staring towards the cave. An incredible improvement had occurred ... Suddenly, Carrel felt pale. He saw the blanket fall gradually down her abdomen. It was tree o'clock After a few minutes the swelling of the abdomen seemed to completely disappear. "I think I'm really going crazy" - Carrel thought . "How do you feel?" - he asked Marie. "All right, I'm not very energetic, but I feel that I am healed!" - Marie said softly. There was no more doubt. The state of Marie Bailly had already improved beyond recognition. Carrel spoke no more, no more thoughts. The unexpected fact was so contrary to all his predictions and he thought he was dreaming! ... What had happened was impossible, the unexpected thing, the miracle.".

Carrel was so upset, he almost went mad. The next night after an event so unexpected and extraordinary, he could not get to sleep, he left the hotel and walked down the esplanade, where he stopped at the statue of the Immaculate Conception and there he indulged in a prayer to the Virgin, which, somehow, explains what had taken place in him: "Sweet Virgin , you succor the unfortunate, who humbly call upon you, help me ... My life so far has been a desert, I promise you, the desert will bloom".

Carrel was a man free from sectarianism and atheistic ideologies, he was man who sought the truth. The miraculous event that took place under his eyes led him to believe in the miracle he had witnessed, and finally in the Catholic faith. As a scientist he wanted to examine the fact called "miracle" and continued his scientific research as a believer. Through his studies, thanks to the freedom and honesty of which he had always been proud, he came to the supernatural, which appeared to him a reality no less valid and active than that submitted to its search tools.

November 3rd, 1938 (six years before his death), he turned the Lord: "I want nothing for myself, if not your grace. I want to be in your hands like smoke carried by the wind ... Every minute of my life, Lord, will be devoted to your service. In the darkness, where I cannot see, I will incessantly look for you. Though blind, I will try to follow you, Lord, Show me the way".

He embraced the beauty of the Gospel, the demands of Christian morality, and was fascinated by the new commandment of love dictated by Christ which, if lived by all, would create a new world.Carrel: "There's a big difference between Jesus of Nazareth and Newton, and it is the precept of mutual love taught by Jesus,it is way a more important law than the law of universal gravitation".

Wikipedia has this to say about his conversion:

In 1902 Alexis Carrel went from being a skeptic of the visions and miracles reported at Lourdes to being a believer in spiritual cures after experiencing a healing of Marie Bailly that he could not explain. The Catholic journal Le nouvelliste reported that she named him as the prime witness of her cure. Alexis Carrel refused to discount a supernatural explanation and steadfastly reiterated his beliefs, even writing the book "The Voyage to Lourdes" describing his experience, although it was not published until four years after his death. This was a detriment to his career and reputation among his fellow doctors, and feeling he had no future in academic medicine in France, he emigrated to Canada with the intention of farming and raising cattle. After a brief period, he accepted an appointment at the University of Chicago and two years later at the Rockefeller Institute of Medical Research.

8
From a biblical perspective, Who performs a miracle - the person or God?
15
According to Catholic doctrine, how can an angel be a saint?
1
Who does Paul consider to be "Saints" in Romans 1:7?
1
According to the Catholic Church, when Peter briefly walked on water, was it a miracle attributed to him?
0
What miracles were performed during the beatification and canonization processes of Mother Teresa?
3
Are there examples of "successful" celibate homosexuals, according to the Catholic Church?
4
About the intercessions of Saints to God, on one's behalf?
1
Are there instances of miracles that are officially recognized by non-Catholic denominations?
11
Are there any examples of married, male, non-martyred (white crown), non-royal, canonized Catholic Saints excluding Saint Joseph?
8
From the perspective of Catholicism are there any non-Catholic saints?