What is the basis of St. Pius X in 1906 that led to the approval of the prayer devotion; “Mary Virgin Priest, pray for us”?

In 1906, Pope Pius X approved a prayer which says “Mary, Virgin Priest, pray for us.” However, a Holy Office decree of 1916 forbade the use of any image that had Mary wearing vestments – some say for fear of the possibilty of an argument for women’s ordination, others that Mary as a priest was a metaphorical image taken too far. -The Priesthood of Mary

NOTE: There is a related thread on this question but the accepted answer is Mary Virgin Priest is not a real priesthood. Are Catholics permitted to honour Mary as a priest?.

For those who believe that Mary Virgin Priest is a valid expression , what kind of priesthood does Mary possessed? Is it similar to the Sacramental Order of the ministerial priesthood instituted by Christ or is it a unique concept associated with Mary at the foot of the Cross.

What is the basis of St. Pius X in 1906 that led to the approval of the prayer devotion; Mary Virgin Priest, pray for us.?

What is the basis of St. Pius X in 1906 that led to the approval of the prayer devotion; “Mary Virgin Priest, pray for us”?

Oh Mary, Mother of Mercy, “Mother and Daughter of Him who is the Father of mercies and the God of all consolation” (1), “Distributress of all the treasures of your Son” (2), “Minister of God” (3), “Mother of our High Priest Christ, both priest and altar” (4), “Immaculate Tabernacle of the Word of God” (5), “Teacher of all Apostles and Disciples of Christ” (6), protect our Supreme Pontiff, intercede for us and for our priests that the High Priest Jesus Christ may purify our consciences, and that we may worthily and piously approach his sacred meal. 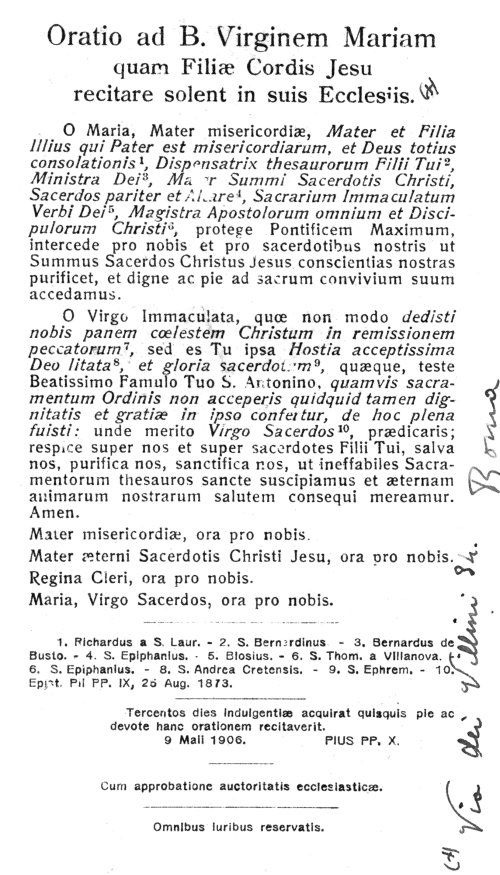 O Immaculate Virgin, who not only “has given us Christ the celestial bread in forgiveness of sins (7), but who is yourself ”A most acceptable sacrifice offered to God" (8), “and the glory of priests” (9), and who, as your most blessed servant Saint Antoninius declares, “although you did not receive the Sacrament of Order, you were full of whatever in dignity and grace is given by it”, you are therefore rightly hailed as “Virgin Priest” (10). Please, look down on us and on the priests of your son, save us, purify us, sanctify us, that we may receive the ineffable treasures of your sacraments in a saintly manner and may deserve to obtain the eternal salvation of our souls. Amen - WOMEN CAN BE PRIESTS

What is an indulgence?

The word indulgence (Latin indulgentia, from indulgeo, to be kind or tender) originally meant kindness or favor; in post-classic Latin it came to mean the remission of a tax or debt. In Roman law and in the Vulgate of the Old Testament (Isaiah 61:1) it was used to express release from captivity or punishment. In theological language also the word is sometimes employed in its primary sense to signify the kindness and mercy of God. But in the special sense in which it is here considered, an indulgence is a remission of the temporal punishment due to sin, the guilt of which has been forgiven. Among the equivalent terms used in antiquity were pax, remissio, donatio, condonatio. - Catholic Encyclopedia

Who can grant indulgences?

The distribution of the merits contained in the treasury of the Church is an exercise of authority (potestas iurisdictionis), not of the power conferred by Holy orders (potestas ordinis). Hence the pope, as supreme head of the Church on earth, can grant all kinds of indulgences to any and all of the faithful; and he alone can grant plenary indulgences. The power of the bishop, previously unrestricted, was limited by Innocent III (1215) to the granting of one year's indulgence at the dedication of a church and of forty days on other occasions. Leo XIII (Rescript of 4 July. 1899) authorized the archbishops of South America to grant eighty days (Acta S. Sedis, XXXI, 758). Pius X (28 August, 1903) allowed cardinals in their titular churches and dioceses to grant 200 days; archbishops, 100; bishops, 50. These indulgences are not applicable to the souls departed. They can be gained by persons not belonging to the diocese, but temporarily within its limits; and by the subjects of the granting bishop, whether these are within the diocese or outside--except when the indulgence is local. Priests, vicars general, abbots, and generals of religious orders cannot grant indulgences unless specially authorized to do so. On the other hand, the pope can empower a cleric who is not a priest to give an indulgence (St. Thomas, "Quodlib.", II, q. viii, a. 16). - Catholic Encyclopedia

The Popes and devotion to Mary Priest

Pope Pius VII (1800 - 1823 AD) Pius VII approved the devotion to Mary ‘Pastrix Animarum’ [=‘sheperdess of souls’]. This title had arisen in the Capuchin Order at Seville (Spain) from the beginning of the 17th century. Request for the formal approval was submitted to the Holy Father by Jérôme Joseph OFM Cap, a consultor of the Holy Office, in 1796 (addressed to Pope Pius VI who died soon afterwards).

Pope Pius IX (1846 - 1878 AD) Pius IX wrote a letter to recommend the book Marie et le Sacerdoce [‘Mary and the Priesthood’] by Mgr. O. van den Berghe, Paris 1873. This book is entirely devoted to describing the priesthood of Mary and to documenting its theological and spiritual antecedents in Christian tradition.

Pius IX’s letter of approval was printed as a preface to the book. It contained the following paragraph:

“To inculcate an attitude of sacrifice in the clergy, nothing can be a greater help than the patronage of the Mother of God. There is no more striking example, none more relevant and effective than the deeds of her who reflected divine holiness in herself, as in a mirror without stain, better than it is reflected in any other creature. From Christ’s virginal conception to his cruel death, Mary united herself so closely to the sacrifice of her divine Son that she has been called the 'Virgin Priest' by the Fathers of the Church”. (Marie et le Sacerdoce, pp. V-VI.)

Note 1. Authors sometimes say that the Fathers never used the title ‘Virgin Priest’. However, ‘Virgin Priest’ is a correct translation of the expression ‘young woman, sacrificial priest’ used by Theodore the Studite. This had been pointed out by Mgr, O van den Berghe in his book.

“I have rejoiced to see this glorious title of Virgo Sacerdos [=Virgin Priest] vindicated, a title which the growing devotion of the last centuries has built up on a text of ecclesiastical antiquity, then hallowed by the authority of our great Pope Pius IX! It will give a new impulse to the devotion to the priestly Virgin, to Mary Mother of the clergy and Mother of priests.” Cardinal L. Pius, Archbishop of Bordeaux in 1875. “[Theologians . . . ] have interpreted with knowledge and piety the thoughts of the Doctors of the Church relating to the mystical priesthood of Mary, and these thoughts are like a concert of praise to our majestic Queen. Without having been invested with the priestly character, Mary was so closely associated with the sacrifice of the eternal Priest that the Fathers of the Church called her Virgo Sacerdos [Virgin Priest] and the Brief of our great Pope Pius IX accepts and hallows that glorious title. I too salute this divine Queen of the Priesthood.” Cardinal V. Vannutelli, Vatican in 1875.

Pope Leo XIII (1878 - 1903) Pope Leo XIII received ‘with joy’ a painting by the artist Capparoni, of Our Lady in priestly vestments. L. Laplace, La Mère Marie de Jésus, Paris 1906, p. 404. (The illustration is given in the book on page 392; I have not been able to trace it so far.) - The Popes and devotion to Mary Priest It would be fair to conclude that St.Pius X uses the teachings of his predecessors, their appreciation and devotion in granting indulgences and approving the prayer devotion. Therefore, Mary Virgin Priest is not a metaphor but a real priesthood.

The only question to resolve are:

When was Mary ordained and who ordained Her as a priest?

Not the answer you're looking for? Browse other questions tagged catholicism virgin-mary priesthood or ask your own question.

4
Are Catholics permitted to honour Mary as a priest?