According to Catholicism, it it possible for Satan and/or his satellites to roam the earth, while still being in hell?

According to Catholicism can Satan and his satellites, roam the earth for the destruction of souls, while still being in hell?

Do demons on earth 🌎 take their own form of hell with them or does God give them leave from hell to torment and persecute souls before they die?

From the Blog of Archdiocese of Washington:

Thus, though consigned to Hell, it would seem that some or all of the demons have the ability to roam the earth as well. Demons, however, do not have bodies and thus do not “roam the earth” the way we do. Their “roaming” is more an indication of their capacity to influence than their ability to move from one place to another. Further, Satan and demons are described as being “chained,” “in prison,” or “in darkness.” This is likely a way of indicating that their power to influence or “roam” is limited in some way. This does not say that they do not wield considerable power, just that it is not unbounded. If you think it is bad now, just imagine what it will be like when their power is unchained! You can read more about it here

The devil and his demons are are angels (immaterial/incorporeal intelligent beings). Angels do not occupy a place in the same sense bodily beings do. Angels are said to be in a place by the action they can produce on material things:

Accordingly there is no need for saying that an angel can be deemed commensurate with a place, or that he occupies a space in the continuous; for this is proper to a located body which is endowed with dimensive quantity. In similar fashion it is not necessary on this account for the angel to be contained by a place; because an incorporeal substance virtually contains the thing with which it comes into contact, and is not contained by it: for the soul is in the body as containing it, not as contained by it. In the same way an angel is said to be in a place which is corporeal, not as the thing contained, but as somehow containing it.

The According to Catholicism, it it possible for Satan and/or his satellites to roam the earth, while still being in hell?

When not in hell proper, they take hell with them.

The demon when not in hell take their interior torments of hell with them. So too the angels that come to our side to protect us are always in the state of being in the presence of the beatific vision and the joys of heaven.

The demons not in hell, still take their Hell with them. The subject of hell is one not clearly understood. Hell could be a state or an actual physical location. We simply do not know everything. Fr. Gabriele Amorth, one of the most famous exorcists in the Catholic Church, in his book An Exorcist Tells His Story, tells us that at the point of liberation of the possessed he condemns the possessor to the Foot of the Cross of Jesus. (A far greater torment than Hell itself in the Devil’s eyes.) He make note that most exorcists condemn then to hell from whence they came.

In the biography of the now canonized St. Mary of Jesus Crucified, Vie de Soeur Marie de Jesus Cruucifie (1846-1878), Religious Carmmelete Converse (1913), by Fr. Estate, he writes the following as what was revealed by the Demon during a diabolic possession of this saint that lasted 100 days! The following is my translation from the French (page 122):

The Devil will come one last time; he spoke of the arrival of Lucifer himself: “Our Leader, he said, hardly ever leaves hell. In passing over the the body of this Arab, he will so much burn it, that you you will not be able to touch it with your finger until the Master (meaning God or Jesus) heals the body in his own time.

St. Thomas has this to say on the subject:

The angels in their own nature stand midway between God and men. Now the order of Divine providence so disposes, that it procures the welfare of the inferior orders through the superior. But man's welfare is disposed by Divine providence in two ways: first of all, directly, when a man is brought unto good and withheld from evil; and this is fittingly done through the good angels. In another way, indirectly, as when anyone assailed is exercised by fighting against opposition. It was fitting for this procuring of man's welfare to be brought about through the wicked spirits, lest they should cease to be of service in the natural order. Consequently a twofold place of punishment is due to the demons: one, by reason of their sin, and this is hell; and another, in order that they may tempt men, and thus the darksome atmosphere is their due place of punishment.

Now the procuring of men's salvation is prolonged even to the judgment day: consequently, the ministry of the angels and wrestling with demons endure until then. Hence until then the good angels are sent to us here; and the demons are in this dark atmosphere for our trial: although some of them are even now in hell, to torment those whom they have led astray; just as some of the good angels are with the holy souls in heaven. But after the judgment day all the wicked, both men and angels, will be in hell, and the good in heaven. - Whether our atmosphere is the demons' place of punishment? (Summa Theologica I q. 64 a. 4)

We see that Satan is in hell in the Visions of Hell of St. Francis of Rome. I will add a caveat here. Visions, even of saints are not always to be considered accurate and the the Church has not pronounced a definitive doctrine on Hell or the state of the unholy angels as of yet.

She said that the devils are divided up into a one to two ratio. She says that one third of the devils are in hell, and those are the ones who actively fought against Michael and angels in the war to dethrone God. According to her, the remaining two thirds of the devils are here on earth and in the air, and these are the ones who sat on the sidelines during the war, and who refused to take sides (i.e., lukewarm). The ones in hell can only come to earth with the express permission of God, when He wants to punish men the most severely for their sins. The devils already on earth can cause havoc with the weather, and they have the job of testing men and women’s faith by seeing if they can get them to sin against God. They are the members of the lowest rank of devils, and they are daily counteracted in their nefarious actions by our guardian angels. These earthly demons will eventually wind up in hell, but since they didn’t rebel outright, but in a passive manner, they do not suffer the pains of hell just yet.

This reminds me of Pope Paul III’s amusing statements to Biagio da Cesena (Spoiler beware alert):“It was widely said that when Cesena complained to Pope Paul III, the pontiff joked that his jurisdiction did not extend to hell and the portrait [of Biagio da Cesena in hell] would have to remain.”

Biagio da Cesena, Papal Master of Ceremonies of Pope Paul III portrayed in hell by Michelangelo. The Last Judgement can be seen by all who visit the Sistine Chapel at the Vatican.

An interesting thought of where Satan is comes from Dante:

In Dante's Inferno, Satan is portrayed as a giant demon, frozen mid-breast in ice at the center of Hell. Satan has three faces and a pair of bat-like wings affixed under each chin. As Satan beats his wings, he creates a cold wind that continues to freeze the ice surrounding him and the other sinners in the Ninth Circle. The winds he creates are felt throughout the other circles of Hell. In his three mouths, he chews on Judas Iscariot, Marcus Junius Brutus, and Gaius Cassius Longinus. Scholars consider Satan to be "a once splendid being (the most perfect of God's creatures) from whom all personality has now drained away". Satan, also known as Lucifer, was formerly the Angel of Light and once tried to usurp the power of God. As punishment, God banished Satan out of Heaven to an eternity in Hell as the ultimate sinner. Dante illustrates a less powerful Satan than most standard depictions; he is slobbering, wordless, and receives the same punishments in Hell as the rest of the sinners. In the text, Dante vividly illustrates Satan's grotesque physical attributes. - Dante's Satan 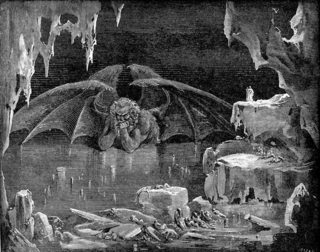 Satan is trapped in the frozen central zone in the Ninth Circle of Hell, Inferno, Canto 34.

Not the answer you're looking for? Browse other questions tagged catholicism satan hell demons earth or ask your own question.

3
What is the role of Lucifer in the Heavenly realm?
0
Did Christ open the Door of Hell after he preached the Gospel in the realm of the dead?

8
Why are the wicked resurrected only to be destroyed and sent to the Lake of Fire?
5
What does the chaining and locking of Satan in the bottomless pit for the millennial reign accomplish?
1
Which, if any, Protestant bodies affirm punishment in the afterlife for the unrighteous prior to the general resurrection and the Day of the Lord?
7
Concept and permanence of hell and the "outer darkness" according to LDS beliefs
0
Did Christ open the Door of Hell after he preached the Gospel in the realm of the dead?
2
If Satan is unable to become incarnate will he possess and control the Antichrist