According to Catholicism and Revelation are we going to be able to eat meat in Heaven or the Garden of Eden?

Will be able to eat meat or will we be like Adam and Eve eating a non-meat based diet in heaven or the Garden of Eden?

According to Catholicism and Revelation are we going to be able to eat meat in Heaven or the Garden of Eden?

Interesting question as it deals with two separate locations in one question.

We might eat in heaven and the Prophets Elijah and Enoch might also eat in the Garden of Eden, but meat would not be found in either.

First of all we can suppress the idea that we are not talking about any random restaurant which may incidental be called Heaven.

St. Thomas says that animals will not be in heaven:

St. Thomas Aquinas says no. I say yes. Please keep this in mind for the rest of this column: while the Church has never taught definitively on either side of the question, St. Thomas Aquinas is a Doctor of the Church. He is The Man when it comes to all things theological. I am a doctor of nothing. Let’s allow the Doctors to be the people we pay more attention to. If you are interested in reading why St. Thomas Aquinas arrives at his theological opinion, you can find his argument online if you click here. This was written for graduate students who had completed five years of study in philosophy. If you find his argument simplistic, it may be one’s ability to understand the nuance of his argument that is lacking rather than his argument.

As for responding to this question, I would like to treat the ideas of Heaven and the Garden of Eden as two separate places.

Will we eat food in heaven?

Many people ask whether we will eat food in heaven because eating is not only necessary to stay alive, but it is also so very enjoyable! Because eating is enjoyable, many people conclude that what is enjoyable on earth (sex, family relationships, etc.) will naturally be present in heaven. Although the Bible does not give us a detailed answer to the question of eating food in heaven, a few observations from the Scriptures are in order.

It is interesting to note that when the Lord Jesus celebrated the Passover with His disciples shortly before His crucifixion, He referred to eating and drinking in the kingdom. “Assuredly, I say to you, I will no longer drink of the fruit of the vine until that day when I drink it new in the Kingdom of God’” (Mark 14:25). The earthly millennial kingdom is certainly in view here, and in that kingdom all who are His followers will have already received their resurrection bodies. It would appear from this statement that we, in our glorified bodies, will eat and drink in the millennial kingdom. But what about the heavenly kingdom?

When John the Apostle was given a vision of the New Jerusalem, he was shown “a pure river of water of life, clear as crystal, proceeding from the throne of God and of the Lamb. In the middle of its street, and on either side of the river, was the tree of life, which bore twelve fruits, each tree yielding its fruit every month. The leaves of the tree were for the healing of the nations. And there shall be no more curse…” (Revelation 22:1-3). The text does not say whether we will actually eat the fruit of the tree of life, but that is certainly possible.

If we will be eating in heaven, we don’t know for sure what the heavenly menu may contain, although it has been suggested that perhaps our diet will be like that of Adam and Eve in paradise before the fall. “And God said, ‘See, I have given you every herb that yields seed which is on the face of all the earth, and every tree whose fruit yields seed; to you it shall be for food’” (Genesis 1:29).

In the end, we don’t really know if, or what, we will eat in heaven. Believers only “know in part” (1 Corinthians 13:9). The joys of being forever with our Savior who is the Bread of Life are beyond our limited abilities to comprehend, for “it has not yet been revealed what we shall be, but we know that when He is revealed, we shall be like Him, for we shall see Him as He is. And everyone who has this hope in Him purifies himself, even as He is pure” (1 John 3:2-3).

At a Catholic viewpoint Heaven and the Garden of Eden are not the same place.

Many believe that the earthly paradise, known as the Garden of Eden no longer exists. However this go against the constant tradition of the Church. Tradition places the Two Witnesses from the Book of Revelation in the Garden of Eden waiting for their allotted time to bare testimony to the truth in the last days.

So where is the Garden of Eden and what do the two Prophets eat?

On the last day of liturgical season of Advent, the Church reads the concluding verses of the Old Testament prophecy of Malachi. These verses explicitly forecast the miraculous arrival of the real prophet Elijah to the Earth from Paradise so as to perform a mission in preparation for the Return of Jesus. It is also written and implied in other books that the ancient Enoch will return with Elijah. Here is a summary of all the writings concerning this predicted event: See the following article - The Future Return of Enoch and Elijah

In essence, the Church has no idea where the Earthly Paradise is located, but Scripture, tradition and various Catholic mystics gives us glimpses to various possibilities.

St. Thomas tells us that both of the Prophets Enoch and Elijah are in the Garden of Eden which is situated in what he calls an atmospheric heaven. Where exactly this is he does not say.

Enoch lived before the great Flood. We read the following about him:

“And all the days of Henoch were three hundred and sixty-five years. And he walked with God, and was seen no more: because God took him.” (Genesis 5:23–24, D-R) Concerning Elias we read that he was taken up in a Chariot of Fire:

“And as they went on, walking and talking together, behold, a fiery chariot and fiery horses parted them both asunder: and Elias went up by a whirlwind into heaven.” (2 Kings 2:11, D-R)

As you can see, these two men did not die. According to St Thomas Aquinas, they are preserved in the atmospheric heaven (which is identified with earthly paradise), but not in the empyrean heaven (Heaven proper). See Summa theologiae III, q. 49, a. 5.

Saint Thomas, in agreement with the Church Fathers explains why Enoch and Elias are waiting out there in outer space. Saint Thomas writes these two men will return at the end of time to do battle with the Antichrist. It is unthinkable that these two men would never die since this is contrary to the Apostolic teaching:

Enoch will evangelize and organize the Jews who will seek baptism and convert to the Catholic Faith during the reign of the Antichrist. Elijah will evangelize and organize the last wave of Gentiles that will convert to Christ during the Antichrist’s reign of terror. Both prophets will be slain, rise again, and ascend to Heaven as explained in Apocalypse chapter 11.

I cannot help but wonder about the identity of “atmospheric heaven.” Saint Thomas Aquinas sees it as synonymous with “earthly paradise.” This could be a location in “outer space.” It could be a place hidden on earth. Or perhaps it is the Garden of Eden transferred to another place. There state, I imagine, would be one of natural paradise without the beatific vision. - Enoch and Elias are in the Atmosphere…They will return to battle the Antichrist

The Catholic mystic Blessed Catherine Emmerich has this to say about the Garden of Eden:

I now see Paradise far, far off like a strip of land directly under the point of sunrise. When the sun rises, it mounts up from the right of that strip of land which lies east of the Prophet Mountain and just where the sun rises. It looks to me like an egg hanging over indescribably clear water which sepa­rates it from the earth. The Prophet Mountain is, as it were, a promontory rising up through that water. On that mountain, one sees extraordinarily verdant regions broken here and there by deep abysses and ravines full of water. I have, indeed, seen people climbing up the Prophet Mountain, but they did not go far. 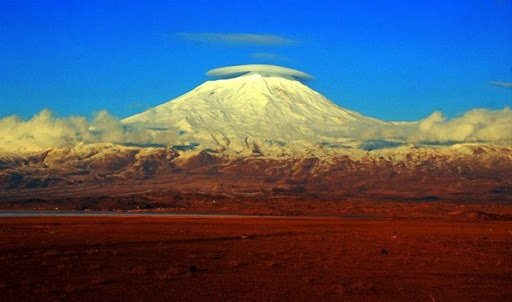 Mount Ararat, like an egg...over water. Where is the Garden of Eden now and does an angel with a flaming sword still guard it?

No sources say that meat will be eaten in either Heaven or the Earthly Paradise called Eden.

Eden will cease to exist when this world passes away.

Not the answer you're looking for? Browse other questions tagged catholicism genesis heaven revelation eden or ask your own question.