I was wondering if any Christians have a prayer that includes movement like bowing towards a certain place and praying like what Muslims and Jews do.

The closest form of the standing /prostration combination together would be the Jesus Prayer tradition (See below).

In Christianity, the Eastern Orthodox, Roman Catholic, Anglican and some Lutheran churches use full prostrations, lying flat on the floor face down, during the imposition of Holy Orders, Religious Profession and the Consecration of Virgins. Additionally, in the Roman Catholic Church at the beginning of the Good Friday Liturgy, the celebrating priest and the deacon prostrate themselves in front of the altar. Dominican practice on Good Friday services in priory churches includes prostration by all friars in the aisle of the church. In the Roman Catholic and Anglican churches, partial prostrations ("profound bows") can be used in place of genuflections for those who are unable to genuflect. The prostration is always performed before God, and in the case of holy orders, profession or consecration the candidates prostrate themselves in front of the altar which is a symbol of Christ. - Prostration (Wikipedia) 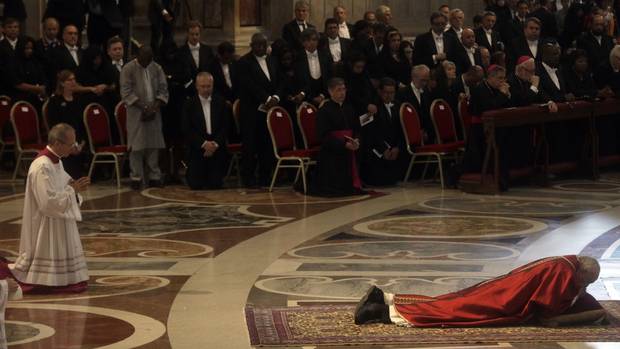 Throughout his life, from the first moment of each day to the last, John Paul kept a regimen of deep, fervent devotions that left those around him, even other religious leaders, in awe.

As he said in the early days of his papacy: "Prayer, which in so many ways expresses our relationship to the living God, is the pope's first duty and his first message, the first condition of his service to the church and the world."

During his Vatican years, health permitting, John Paul would spend as many as seven hours a day in prayer, adoration and contemplation. In "Great Souls: Six Who Saved the Century," journalist David Aikman described the routine during the pontiff's prime:

"John Paul II is at prayer in his private chapel by 6:15 a.m., at times prostrate on the floor, at times actually groaning in the travail of intercession. During moments of down time' amid the panoply of solemn public appearances, he again and again closes his eyes, tightens his facial muscles in concentration, sometimes shades his eyes with his hand, and withdraws to that inner, sealed room of his soul where he communicates with God." - John Paul's fervent prayer inspired awe in others

Remember too that Jesus himself prayed in this position, just before his Passion.

"And he (Jesus) went a little farther, and fell on his face, and prayed, saying, O my Father, if it be possible, let this cup pass from me: nevertheless not as I will, but as thou wilt." - (Matthew 26:39)

Many of our Orthodox brethren pray the Jesus Prayer while in a prostrate position. It is traditional for some.

Establish a Daily Rule for Prostrations and Bows

The novice who is studying the Jesus Prayer will advance greatly by observing a daily rule comprising a certain number of full prostrations and bows from the waist, depending upon the strength of each individual. These are all to be performed without any hurry, with a repentant feeling in the soul and with the Jesus Prayer on the lips during each prostration…. Twelve prostrations suffice in the beginning. Depending upon one's strength, ability and circumstances, that number can be constantly increased. But when the number of prostrations increases, one should be careful to preserve the quality of one's prayer, so that one not be carried away by a preoccupation with the physical into fruitless, and even harmful, quantity. The bows warm up the body and somewhat exhaust it, and this condition facilitates attention and compunction. But let us be watchful, very watchful, lest the state pass into a bodily preoccupation which is foreign to spiritual sentiments and recalls our fallen nature! Quantity, useful as it is when accompanied by the proper frame of mind and the proper objective, can be just as harmful when it leads to a preoccupation with the physical. The latter is recognized by its fruits which also distinguish it from spiritual ardor. The fruits of physical preoccupation are conceit, self-assurance, intellectual arrogance: in a word, pride in its various forms, all of which are easy prey to spiritual deception. The fruits of spiritual ardor are repentance, humility, weeping and tears. The rule of prostrations is best observed before going to sleep: then, after the cares of the day have passed, it can be practiced longer and with greater concentration…. Prostrations stimulate a prayerful state of the mind and mortify the body as well as support and strengthen fervor in prayer. - On Practicing the Jesus Prayer

The faithful of the Early Church often prayed in the Orant Gesture in prayer.

The word orant, or latin orans, is a noun form of the verb orare, to pray, and describes an early mode of prayer practiced by the first Christians ((http://en.wiktionary.org/wiki/orant)). From Wikipedia we read:

Orant is a type of gesture during prayer in which the hands are raised, set apart, and the palms face outward. It was once common in early Christianity, and can frequently be seen in early Christian art, but has since become quite rare. The gesture is more common in Catholic worship, esoteric sects, and in certain forms of exorcism ritual. It is commonly used in small group renewal weekend settings such as Cursillo. This renewal weekend is offered by Catholic, Lutheran, and Episcopal churches. It is common in some charismatic churches during praiseful singing as well. Orant Gesture - Early Christian Orant Gesture in Prayer

Saint Apollinare in the orant position of prayer

Not the answer you're looking for? Browse other questions tagged prayer comparative-religion prostration or ask your own question.

-2
Which sects of Christianity recite verses of God and prostrate to God during the night?

56
What is the basis for saying Christians and Muslims worship the same God?
8
Which God do Muslims pray to according to Catholic, Orthodox and main-stream Protestant tradition?
10
Is there any record of a visual method of prayer in the Bible?
3
Does St. Gertrude's prayer have any (semi-)official standing in the Catholic Church?
4
What is the biblical basis for switching between the Father, the Son and the Holy Spirit as recipients during prayer?
5
Why there isn't a daily prayer structure like Liturgy of the Hours among Protestants?