According to Catholicism, why did the robbers strip the traveler to Jericho?

At Luke 10:30 (NRSVCE) we meet the traveler to Jericho who was saved by the Good Samaritan, in a vivid narrative given by Jesus:

" Jesus replied, “A man was going down from Jerusalem to Jericho, and fell into the hands of robbers, who stripped him, beat him, and went away, leaving him half dead.""

One is eager to know why Jesus made a mention of robbers stripping the traveler. They would have done it to search for hidden purses. Or, Jesus perhaps wanted to give a benefit of doubt to the priest who would naturally take the traveler for naked and dead, therefore `double-unclean'. I therefore, wish to know the importance of Jesus' mention of the stripping and beating of the traveler to Jericho. Do the teachings of Catholic Church say anything about it ?

The robbers represent the demons, the fallen angels, who take advantage of man fallen into sin:

From the Catena Aurea on Luke 10:

AMBROSE: But who are those robbers but the Angels of night and darkness, among whom he had not fallen, unless by deviating from the divine command he had placed himself in their way.

AUGUSTINE: He fell then among robbers, that is, the devil and his angels, who through the disobedience of the first man, stripped the race of mankind of the ornaments of virtue, and wounded him, that is, by ruining the gift of the power of free will. Hence it follows, who stripped him of his raiment, and wounded him, and departed, for to that man sinning he gave a wound, but to us many wounds since to one sin which we contract we add many.

The priest and Levite signify the Law of Moses, which cannot free man from sin:

I think it's just to give emphasis of the story. First, it certainly wasn't an impossible thing to happen. The road from Jerusalem to Jericho is a long and desolated one. Surely robbers had plenty of time to do what they wanted, and since clothe was valuable, why not steal it?

Moreover, there are several too familiar references in the New Testament about clothing the naked, about giving your second cloak (many Jews used to have no more than two cloaks). Jesus might have mentioned this many many times in his 3 years' ministry. This is even mentioned by some of the apostles too. Consider James Chapter 2:

What good is it, my brothers and sisters,a if you say you have faith but do not have works? Can faith save you? If a brother or sister is naked and lacks daily food, and one of you says to them, “Go in peace; keep warm and eat your fill,” and yet you do not supply their bodily needs, what is the good of that?

So the emphasis seems not only logically possible and perhaps usual but in line with Jesus' teachings.

A more obscure reason could be that Jesus is trying to teaching is us deep theology. St. Augustine understood the Good Samaritan parable as our own story of salvation. He writes:

True it is, when man was created he received great power of free-will; but he lost it by sin. He fell into death, became infirm, was left in the way by the robbers half dead; the Samaritan, which is by interpretation keeper, passing by lifted him up on his own beast; he is still being brought to the inn.

So the nakedness of the victim represent our own "nakedness" before God. We have nothing of ours. In effect, in Chapter 3 of Revelation we read:

"And to the angel of the church in Laodi- cea write: The words of the Amen, the faithful and true witness, the origina of God’s creation: “I know your works; you are neither cold nor hot. I wish that you were either cold or hot. So, because you are lukewarm, and neither cold nor hot, I am about to spit you out of my mouth. For you say, ‘I am rich, I have prospered, and I need nothing.’ You do not realize that you are wretched, pitiable, poor, blind, and naked.

“See, I am coming like a thief! Blessed is the one who stays awake and is clothed,a not going about naked and exposed to shame.”

According to Catholicism, why did the robbers strip the traveler to Jericho?

First of all, it must be stated that this story as recount by Our Lord is indeed a parable.

The parable of the Good Samaritan is a parable told by Jesus in the Gospel of Luke. It is about a traveller who is stripped of clothing, beaten, and left half dead alongside the road. First a priest and then a Levite comes by, but both avoid the man. Finally, a Samaritan happens upon the traveller. Samaritans and Jews despised each other, but the Samaritan helps the injured man. Jesus is described as telling the parable in response to the question from a lawyer, "And who is my neighbour?". In response, Jesus tells the parable, the conclusion of which is that the neighbour figure in the parable is the man who shows mercy to the injured man—that is, the Samaritan.

Some Christians, such as Augustine, have interpreted the parable allegorically, with the Samaritan representing Jesus Christ, who saves the sinful soul. Others, however, discount this allegory as unrelated to the parable's original meaning and see the parable as exemplifying the ethics of Jesus.

Origen described the allegory as follows:

The man who was going down is Adam. Jerusalem is paradise, and Jericho is the world. The robbers are hostile powers. The priest is the Law, the Levite is the prophets, and the Samaritan is Christ. The wounds are disobedience, the beast is the Lord's body, the [inn], which accepts all who wish to enter, is the Church. ... The manager of the [inn] is the head of the Church, to whom its care has been entrusted. And the fact that the Samaritan promises he will return represents the Savior's second coming.

This allegorical reading was taught not only by ancient followers of Jesus, but it was virtually universal throughout early Christianity, being advocated by Irenaeus, Clement, and Origen, and in the fourth and fifth centuries by Chrysostom in Constantinople, Ambrose in Milan, and Augustine in North Africa. This interpretation is found most completely in two other medieval stained-glass windows, in the French cathedrals at Bourges and Sens." - [Parable of the Good Samaritan](Parable of the Good Samaritan)

The Catholic Encyclopedia puts it this way:

The good samaritan is certainly authentic; it can be explained mystically in detail, and is therefore as much an "allegory" as a parable. If it was spoken by our Lord so was the wicked husbandmen. It does not exactly reply to the question "Who is thy neighbour?" but propounds and answers a larger one, "Whom in distress should I like to be neighbour to me?" and gives an everlasting instance of the golden rule. At the same time it breaks down the fences of legalism, triumphs over national hatreds, and lifts the despised Samaritan to a place of honour. In the deeper sense we discern that Christ is the Good Samaritan, human nature the man fallen among robbers, i.e., under Satan's yoke; neither law nor Prophets can help; and the Saviour alone bears the charge of healing our spiritual wounds. The inn is Christ's Church; the oil and wine are His sacraments. He will come again and will make all good. The Fathers, Sts. Ambrose, Augustine, Jerome, are agreed in this general interpretation. Mere philanthropy will not satisfy the Gospel idea; we must add, "the charity of Christ presseth us" (2 Corinthians 5:14). - The good Samaritan (Luke 10:37)

While in the seminary, we were told that it the reasons why the robbers in Our Lord’s days would have stripped pilgrims or travellers of their cloths would have been two fold:

If the robbers believed, the victim to be dead, he had no need of any clothing and thus was despoiled of all that he was carrying at the moment. Clothing, we must remember was a commodity that was treasured by both thieves and executioners. The Passion of Christ bears this out when the soldiers drew lots for Christ’s tunic.

A second element to be added to this scenario is that if the victim was not dead, he would have been unable to look for his assailants because he was naked and now needed clothes to continue his journey.

Thus these robbers were truly doing what was in their best interests when they left him half dead. 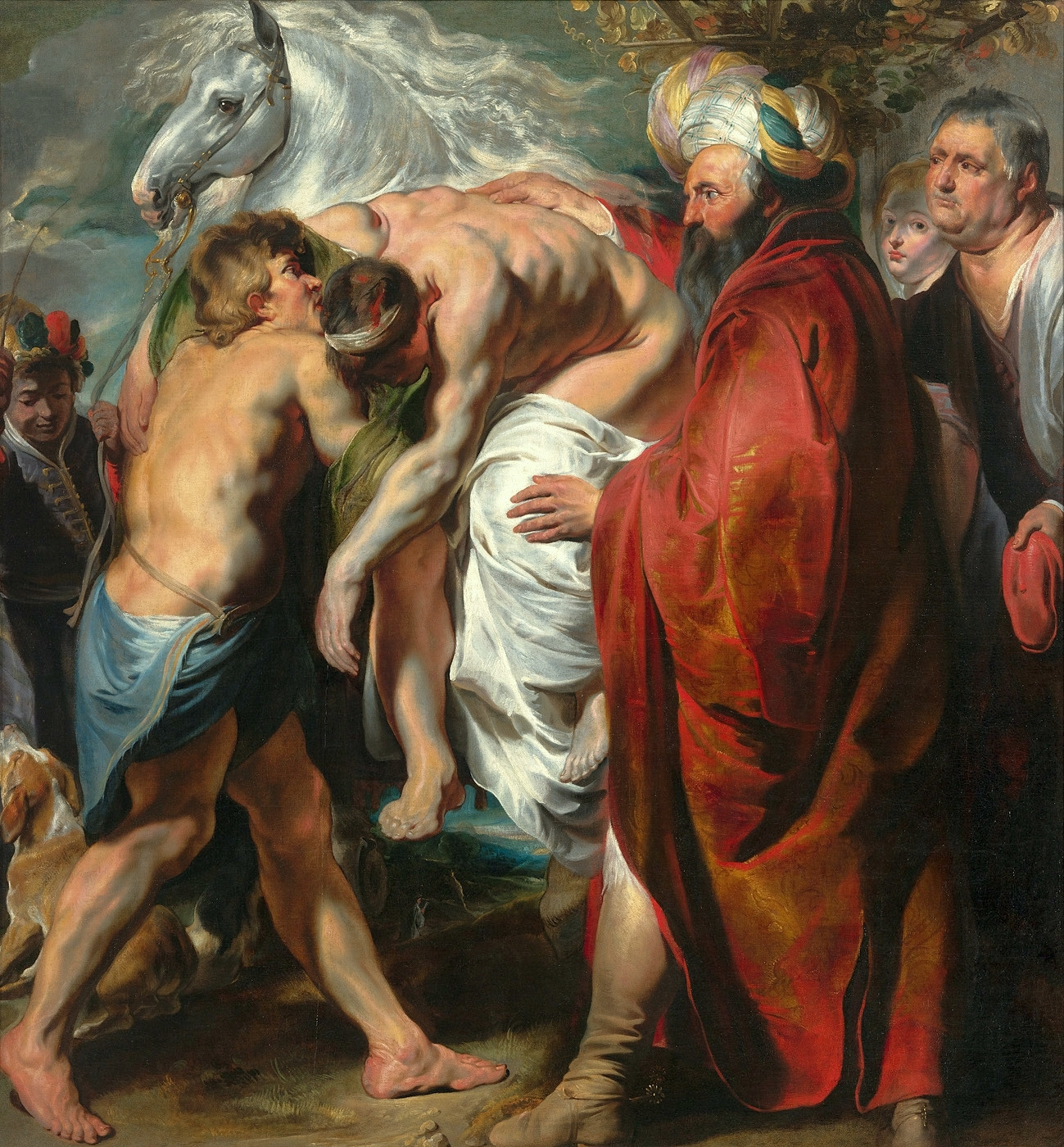 The Good Samaritan by Jacob Jordaens

Not the answer you're looking for? Browse other questions tagged catholicism life-of-jesus gospel-of-luke parables or ask your own question.