Why doesn't the Pope wear a biretta?

In several places around the Internet I have seen it stated that the Pope does not wear a biretta.

Why not? Is it merely that there are no occasions when he would, because he is always presiding over a celebration?

Or is there another significance?

Why does the pope not wear a biretta?

It not only is not part of the Roman Catholic tradition, it would be at odds with the traditions of the Norbertines or White Canons who actually wear a white biretta.

The biretta may be used by all ranks of the Latin clergy cardinals and other bishops to priests, deacons, and even seminarians (who are not clergy, since they are not ordained). Those worn by cardinals are scarlet red and made of silk. After the Second Vatican Council the ceremony of giving the galero to cardinals was replaced with giving the biretta. The biretta of a bishop is amaranth in color, while those worn by priests, deacons, and seminarians are black. The pope does not make use of the biretta.

The Tridentine Roman Missal rubrics on low Mass required the priest to wear the biretta while proceeding to the altar, to hand it to the server on arrival and to resume it when leaving. At solemn Mass the sacred ministers wore it also when seated.

Cardinals bear no tuft or "pom" (they are given their birettas and zuchettos by the Pope who elevated them in a ceremony named a consistory – they will form a line, and kneel before him when receiving them), bishops bear a purple pom, priests who have been appointed as prelates to certain positions within the Vatican wear a black biretta with red pom, diocesan priests and deacons wear a black biretta with or without a black pom. It is often asserted that seminarians are only entitled to wear a biretta without a pom-pom, but there would seem to be no formal ruling on this point. Priests in monastic and mendicant religious orders that have their own habits (Benedictines, Franciscans, Dominicans, etc.) do not generally wear birettas: in most circumstances, even liturgical, the monastic hood took the place of the biretta. Canons Regular generally do—for instance the canons of the Order of Prémontré wear a white biretta. Clerks Regular (that is, post-Renaissance religious orders primarily dedicated to priestly ministry, for instance the Jesuits and Redemptorists) generally wear a black biretta with no tuft. Other priests who belong to various forms of community life, as the Congregation of the Oratory of St. Philip Neri for instance, generally also wear birettas, but without a pom. - Biretta (Wikipedia)

No pope has ever tried wearing a white biretta as a papal tradition. It belongs to the Order of Canons Regular of Prémontré. 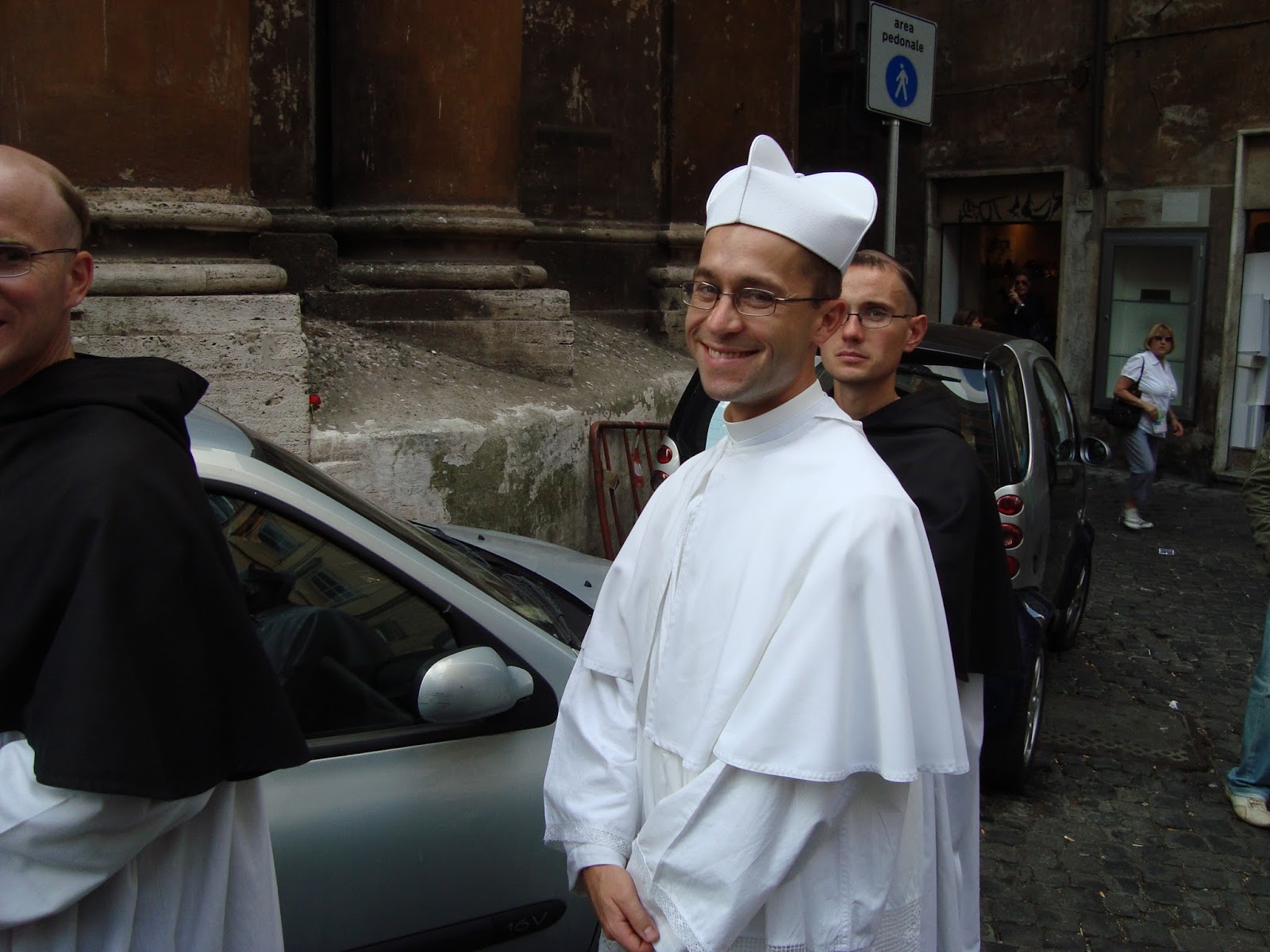 Hallowed White Biretta of the Norbertines

The 'traditional' biretta at the Pontifical University of Saint Thomas Aquinas, Angelicum, is also white, to correspond to the white Dominican habit.

Besides the pope as the head of the Universal Catholic Church places the scarlet red biretta on the head of newly created cardinals at Rome.

The biretta is a liturgical vestment reserved to clerics below the level of Sovereign Pontiff. Thus a pope has no biretta.

The pope never wears a biretta. He always wears the skullcap which is made of white silk. The Holy Father never removes his skullcap except at the more colemn parts of the Mass.

Not the answer you're looking for? Browse other questions tagged catholicism papacy tradition vestments or ask your own question.

2
Is it true the term 'pontifex maximus' was the name of the high priest of the Roman Cult of Emperor Worship, before being adopted by the Pope?
7
Where did the hierarchical designations of priest, cardinal, bishop, and pope come from in the Catholic church?
21
What is the endgame for sedevacantists?
7
What would happen if the Pope were to abuse his power?
5
Why do Popes have seven candlesticks on the altar at Mass?
23
Has a pope ever been corrected publicly by a non-cleric in the presence of cardinals because of the unclear wording of a papal document?
4
Can a pope name his successor?
12
What is the Catholic Church's historical position on capital punishment: how did we get here?
3
What is the origin of the cope?