Do the ancient churches built by the Portuguese have a statue of mermaid on the façade?

My parish church (St Mary's Forane Church, Muttom, Cherthala, Kerala ) in southern India, believed to have been built by the Portuguese in the 16th Century has, among other images, two built-in statues of mermaids on the façade. Though the church is just a few miles away from the sea, mermaids have not been a subject of our folklore. Presumably, the designer of the church followed some tradition of his homeland. I wish to know if the ancient churches in Portugal have similar statues of mermaid on their façade. If they do, what is the origin of such an artwork?

catholicism tradition symbolism
Share
Improve this question
edited May 23 '19 at 12:56

Do the ancient churches built by the Portuguese have a statue of mermaid on the façade?

The short answer is yes , but they are difficult to locate.

For example, the Jerónimos Monastery or Hieronymites Monastery, is a former monastery of the Order of Saint Jerome near the Tagus river in the parish of Belem and it's façade has mermaids on it.

If one looks carefully one can see the mermaids hereand here.

In the Middle Ages a chapel had been erected on this site in honor of Our Lady, Star of the Sea. This maritime association with the Virgin was important since ships were anchored nearby. Prince Henry the Navigator ordered that additions be built to the small chapel and then renamed it Santa Maria de Belém. - Jerónimos Monastery

I have also been able to locate an image of a mermaid carved in a capital at Travanca Monastery in Portugal. 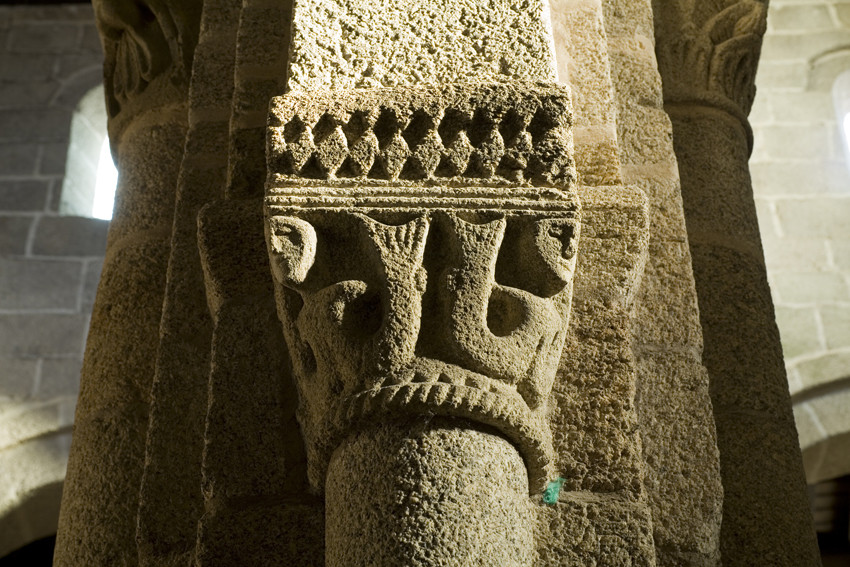 In any case I would like to make a few remarks on this subject at hand.

First of all, we are not to associate any European mermaid art in Catholic churches with the imaginary mermaid saint: Muirgen. It is absolutely bizarre how some ancient folklore cam make a mermaid a saint. The Mermaid Saint story or legend is imaginary, yet it stresses the importance of baptism and as such may have been used as a teaching tool. No such St. Muirgen the Mermaid exists.

Medieval mermaids in European architecture is not as uncommon as one would think and this would certainly include Portugal. This is more of a Western European subject matter than merely just Portugal or Spain.

A strange part of the story of the medieval mermaid, is that images of mermaids are fairly common in old churches. They were part of the usual depictions of temptations and other vices that men were to resist. - The Medieval Mermaid

Here are some examples: 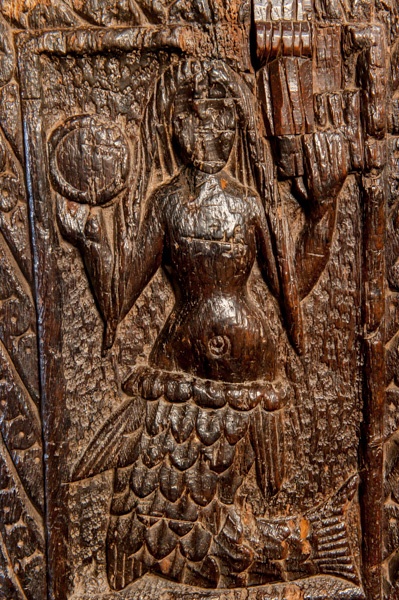 Zennor church is famous for a carved medieval chair, or bench end, displayed in the south side chapel. The carving is generally dated to between 1400-1500. The carving shows a mermaid carrying a comb and mirror.

In later images the quince has become a mirror, a symbol of heartlessness and vanity, which rather twists the original meaning. In the medieval period it was a common Cornish custom to perform 'miracle plays', in which the mermaid was used to represent the dual nature of Christ; just as the mermaid was both fish and human, Christ was both God and man. You can still see medieval wall paintings of mermaids in other Cornish churches, such as Altarnun and Breage, but only at Zennor is there a surviving mermaid carving. - Zennor Church and the Mermaid of Zennor 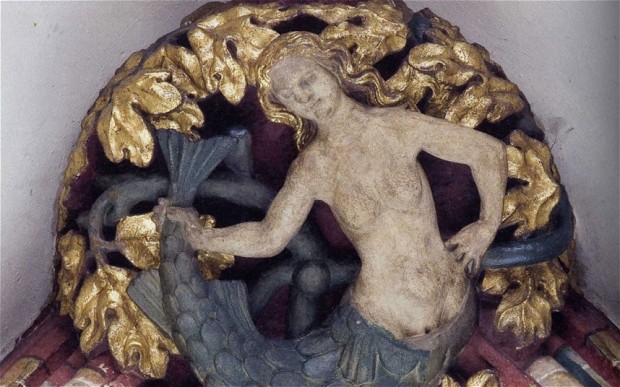 The Mermaid and the Symbolism of the Fish in Art , Literature and Legendary Lore has this to add to our subject:

Of the occurrence of the Mermaid in Ecclesiastical decoration, a few words will suffice. It is one of the most common of subjects on the carved misereres of our cathedrals and churches, and is also found sculptured on brackets, bosses, doorways, and capitals of pillars.

The mermaid lore is symbolic of temptation and losing one's soul forever:

The popularity of the medieval mermaid continued and in the Middle Ages the church decided to do something about it. They changed the mermaid into a symbol of lust and temptation. The story of Odysseus and the sirens was changed so that the sirens were now mermaids. Odysseus' ship was a symbol of the church, and it's mast the cross of Jesus. The mermaids were the temptations that call men away from the church. - The Medieval Mermaid

Not the answer you're looking for? Browse other questions tagged catholicism tradition symbolism or ask your own question.

6
According to the Catholic Church, does purgatory have a symbol?
11
What is the significance of a double cross?
10
What is the meaning of the large statue of a pine cone in Vatican City?
5
Is there any Ethiopian ancient source about the eunuch who was evangelized by Philip?
5
Why do Popes have seven candlesticks on the altar at Mass?
5
Churches that Teach Tradition as Inspired have Different Traditions. How do They Explain This?
4
Why have a photo of the bishop in the sacristy?
1
Ancient imagery beasts used in Christian symbolisms?