What are the Church Laws governing ingredients and shapes of altar bread in the Catholic Church?

There appears to be perfect uniformity in the texture and make of the Sacramental Bread in Catholic churches all across the world. I wish to know if there are any laws governing the ingredients and method of preparation of the Sacramental Bread in the Roman Catholic Church? I also wish to know why the Holy Host administered to the faithful is perfectly round in shape whereas it could have been given the shape of `having been broken', say square, in order to avoid waste while it is being cut from a larger bread.

catholicism sacraments canon-law
Share
Improve this question
edited May 20 '19 at 13:42

Can. 926 According to the ancient tradition of the Latin Church, the priest is to use unleavened bread in the eucharistic celebration whenever he offers it.

As to the form of the bread, round hosts are used in the Latin Church, whereas the Oriental Church employs square hosts.9 The size of the host for Holy Mass and exposition in the Ostensorium should be from two to three and of the particles for distribution about one inch. The altar breads should be neither too thick nor too thin.10

Also, round hosts are made with an iron, so there is no "waste while it is being cut from a larger bread". This baking machine makes hosts and particles: 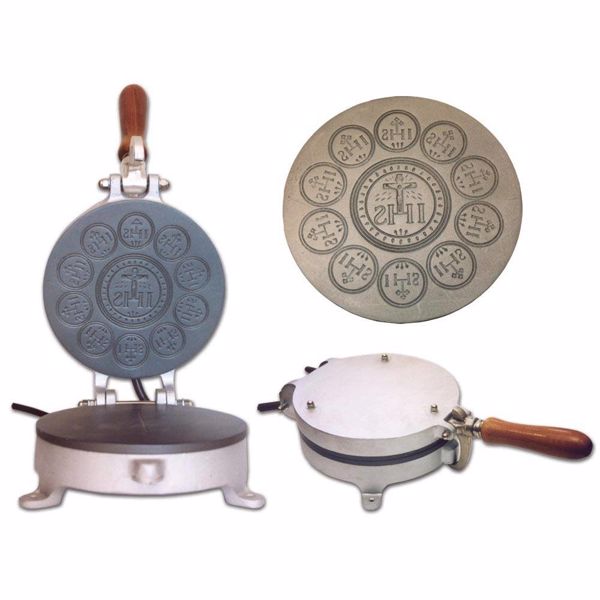 What are the Church laws governing ingredients and shape of altar bread in the Catholic Church?

First of all let us start with Canon Law for the Roman Rite:

Can. 926]1 According to the ancient tradition of the Latin Church, the priest is to use unleavened bread in the eucharistic celebration whenever he offers it.

The 1990 Code of Canon Law states the following for Eastern rite Catholics:

Canon 706 - In the Divine Liturgy the sacred gifts which are offered are bread made of wheat alone and recently made so that there is no danger of corruption and natural wine of the grape and not corrupt.

[48.] The bread used in the celebration of the Most Holy Eucharistic Sacrifice must be unleavened, purely of wheat, and recently made so that there is no danger of decomposition. It follows therefore that bread made from another substance, even if it is grain, or if it is mixed with another substance different from wheat to such an extent that it would not commonly be considered wheat bread, does not constitute valid matter for confecting the Sacrifice and the Eucharistic Sacrament. It is a grave abuse to introduce other substances, such as fruit or sugar or honey, into the bread for confecting the Eucharist. Hosts should obviously be made by those who are not only distinguished by their integrity, but also skilled in making them and furnished with suitable tools.

[49.] By reason of the sign, it is appropriate that at least some parts of the Eucharistic Bread coming from the fraction should be distributed to at least some of the faithful in Communion. “Small hosts are, however, in no way ruled out when the number of those receiving Holy Communion or other pastoral needs require it”,[126] and indeed small hosts requiring no further fraction ought customarily to be used for the most part. - Redemptionis Sacramentum

The Catholic Encyclopedia has a great article on this subject:

Bread is one of the two elements absolutely necessary for the sacrifice of the Eucharist. It cannot be determined from the sacred text whether Christ used the ordinary table bread or some other bread specially prepared for the occasion. In the Western Church the altar-breads were probably round in form. Archaeological researches demonstrate this from pictures found in the catacombs, and Pope St. Zephyrinus (A.D. 201-219) calls the altar-bread "coronam sive oblatam sphericae figurae". In the Eastern churches they are round or square. Formerly the laity presented the flour from which the breads were formed. In the Eastern Church the breads were made by consecrated virgins; in the Western Church, by priests and clerics (Benedict XIV, De Sacrif. Missae, I, section 36). This custom is still in vogue in the Armenian Church. The earliest documentary evidence that the altar-breads were made in thin wafers is the answer which Cardinal Humbert, legate of St. Leo IX, made at the middle of the eleventh century to Michael Cerularius, Patriarch of Constantinople. These wafers were sometimes very large, as from them small pieces were broken for the Communion of the laity, hence the word "particle" for the small host; but smaller ones were used when only the celebrant communicated.

For valid consecration the hosts must be:

•made of wheaten flour,

•baked in an oven, or between two heated iron moulds, and

If the host is not made of wheaten flour, or is mixed with flour of another kind in such quantity that it cannot be called wheat bread, it may not be used (ibid.). If not natural but distilled water is used, the consecration becomes of doubtful validity (ibid., 2). If the host begins to be corrupt, it would be a grievous offence to use it, but it is considered valid matter (ibid., 3.) For licit consecration:

•The hosts must be recently made (Rit. Rom., tit. iv, cap. i, n. 7). The rubrics do not specify the term recentes in speaking of the hosts. In Rome, the bakers of altar-breads are obliged to make solemn affidavit that they will not sell breads older than fifteen days, and St. Charles, by a statute of the Fourth Synod of Milan, prescribed that hosts older than twenty days must not be used in the celebration of Mass. In practice, therefore, those older than three weeks ought not to be used.

•Round in form, and not broken.

•Clean and fair, of a thin layer, and of a size conformable to the regular custom in the Latin Church. In Rome the large hosts are about three and one-fifth inches in diameter; in other places they are smaller, but should be at least two and three-fourths inches in diameter. The small hosts for the Communion of the laity should be about one and two-fifths inches in diameter (Schober, S. Alphonsi Liber de Caeremoniis Missae, p. 6, footnote 9). When a large host can not be obtained Mass may be said in private with a small host. In cases of necessity, such as permitting the people to fulfil the precept of hearing Mass, or administering Viaticum, the Mass may be also said with a small host but, as liturgists say, to avoid scandal the faithful should be advised.

As a rule the image of Christ crucified should be impressed on the large host (Cong. Sac. Rit., 6 April, 1834), but the monogram of the Holy Name (Ephem. Lit., XIII, 1899, p. 686), or the Sacred Heart (ibid., p. 266) may also be adopted. The altar-breads assumed different names according as they had reference to the Eucharist as a sacrament or as a sacrifice: bread, gift (donum), table (mensa) allude to the Sacrament, which was instituted for the nourishment of our soul; oblation victim, host, allude to sacrifice. Before the tenth century the word "host" was not employed, probably because before this time the Blessed Eucharist was considered more frequently as a sacrament than as a sacrifice, hence the Fathers use such expressions as communion (synaxis), supper (coena), breaking of bread, etc., but at present the word "host" is used when referring to the Eucharist either as a sacrament or as a sacrifice. In the liturgy it is used:

•for the bread before its consecration, "Suscipe sancte Pater . . . hanc immaculatam hostiam" (Offertory of the Mass); 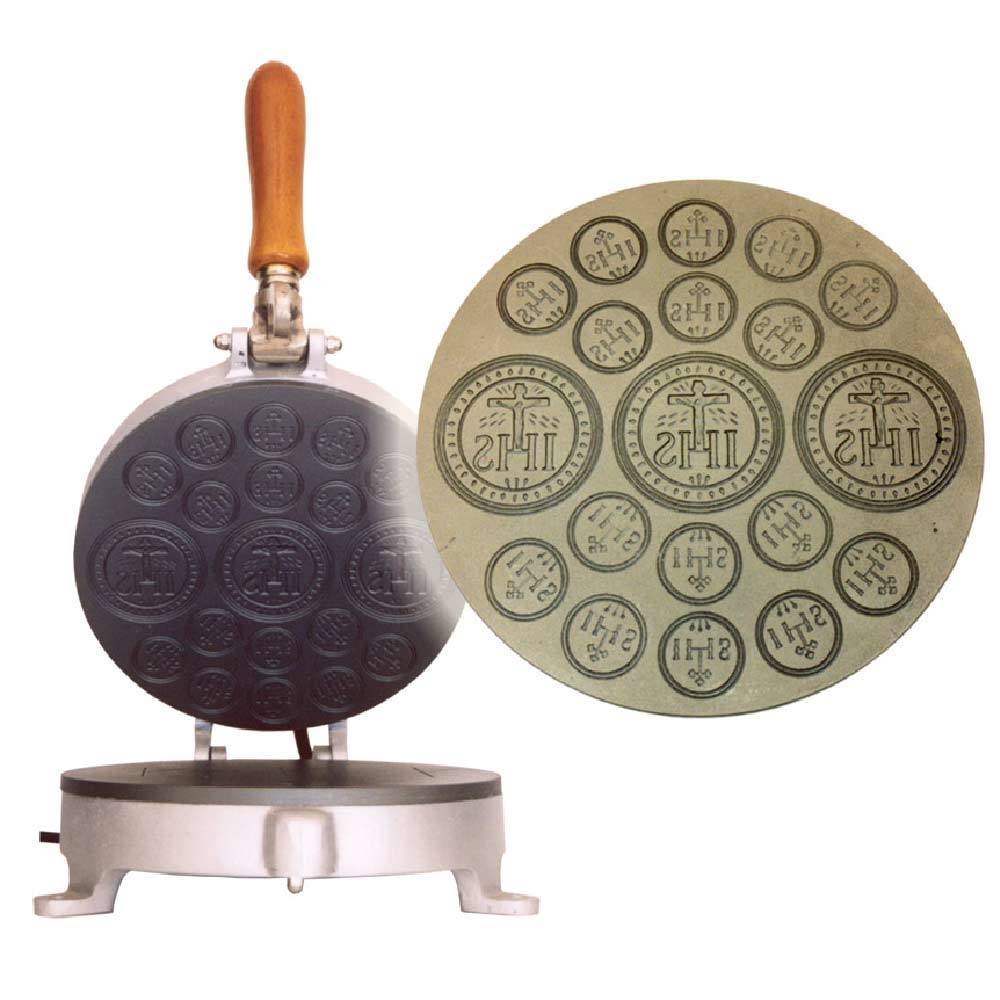 Most Eastern Churches traditionally use leavened bread for the Eucharist and this would be a requirement for the licit celebration of the Eucharist in those Churches.

For the laity, Communion is always given on the tongue and via intinction. However, the Byzantine Rite uses leavened bread in the confection of the Eucharist. Small pieces of the Host, usually sliced in very small cubes, are placed into the chalice with the Precious Blood. Then, each communicant comes forward receiving both the Body and Blood of our Lord through a small liturgical spoon.

In the Eastern Churches, the prosfora loaf is made of leavened bread. Communion is served on a golden spoon and dropped into the open mouth of the communicant by the priest or deacon. 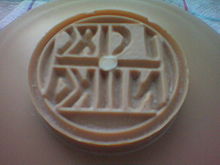 This is an example of a Russian-style prosphora seal, for five small identical loaves.

In 2003, Cardinal Joseph Ratzinger, then head of the Congregation for the Doctrine of the Faith, wrote in a letter that “hosts that are completely gluten-free are invalid matter for the celebration of the Eucharist.”

The 2003 letter also acknowledged that “low-gluten hosts (partially gluten-free) are valid matter, provided they contain a sufficient amount of gluten to obtain the confection of bread without the addition of foreign materials and without the use of procedures that would alter the nature of bread.” This language about gluten-free and low-gluten hosts is exactly the same as that contained in the recent letter. - Explainer: What the “new” Vatican rules on gluten-free hosts mean

Not the answer you're looking for? Browse other questions tagged catholicism sacraments canon-law .