Does the Catholic Church teach that modern churches have guardian angels?

Revelation chapters 2 and 3 involve John being instructed to write letters to the angels of particular churches. For instance:

To the angel of the church in Ephesus writeâ€¦

In Scott Hahnâ€™s Book The Lambâ€™s Supper: The Mass as Heaven on Earth, he states in Part 2, Chapter 2 that this is evidence that modern churches have guardian angels assigned to them too:

Does the Catholic Church teach that modern churches (i.e. those that have been recently constructed) also have guardian angels assigned to them, as Scott Hahn States? And if so, do they teach that they are assigned to parishes or more general areas (e.g. the Church of New York)?

Does the Catholic Church teach that modern churches have guardian angels?

We even have a Feast of the Guardian Angels. But as such, it has never been defined by the Church, and is, consequently, not an article of faith.

That every individual soul has a guardian angel has never been defined by the Church, and is, consequently, not an article of faith; but it is the "mind of the Church", as St. Jerome expressed it: "how great the dignity of the soul, since each one has from his birth an angel commissioned to guard it." (Comm. in Matt., xviii, lib. II).

In the Bible this doctrine is clearly discernible and its development is well marked. In Genesis 28-29, angels not only act as the executors of God's wrath against the cities of the plain, but they deliver Lot from danger; in Exodus 12-13, an angel is the appointed leader of the host of Israel, and in 32:34, God says to Moses: "my angel shall go before thee." At a much later period we have the story of Tobias, which might serve for a commentary on the words of Psalm 90:11: "For he hath given his angels charge over thee; to keep thee in all thy ways." (Cf. Psalm 33:8 and 34:5) Lastly, in Daniel 10 angels are entrusted with the care of particular districts; one is called "prince of the kingdom of the Persians", and Michael is termed "one of the chief princes"; cf. Deuteronomy 32:8 (Septuagint); and Ecclesiasticus 17:17 (Septuagint).

But in the New Testament the doctrine is stated with greater precision. Angels are everywhere the intermediaries between God and man; and Christ set a seal upon the Old Testament teaching: "See that you despise not one of these little ones: for I say to you, that their angels in heaven always see the face of my Father who is in heaven." (Matthew 18:10). A twofold aspect of the doctrine is here put before us: even little children have guardian angels, and these same angels lose not the vision of God by the fact that they have a mission to fulfill on earth.

Without dwelling on the various passages in the New Testament where the doctrine of guardian angels is suggested, it may suffice to mention the angel who succored Christ in the garden, and the angel who delivered St. Peter from prison. Hebrews 1:14 puts the doctrine in its clearest light: "Are they not all ministering spirits, sent to minister for them, who shall receive the inheritance of salvation?" This is the function of the guardian angels; they are to lead us, if we wish it, to the Kingdom of Heaven. - Guardian Angel (Catholic Church)

It is taught by St. Thomas Aquinas, as well as many Fathers and Doctors of the Church, that every country has its own Guardian Angel. In fact, St. Clement of Alexandria goes so far as to state that whole "regiments of angels are distributed over nations and cities" (cf. Fr. Pascal Parente, The Angels, p. 119).

It should be noted in particular that Portugal has had a strong and deep devotion to its Guardian Angel for centuries. In fact, that nation was given approval by Pope Leo X in the sixteenth century to introduce a special feast day in order to honor its Guardian Angel. The feast day falls on June 10th of each year. France, similarly has consecrated itself over the centuries to St. Michael the Archangel as her patron. This consecration goes back to King Charlemagne in the early years of the 9th Century.

What's more, all Americans should be aware of the fact that a statue has been erected at the National Shrine of the World Apostolate of Fatima in Washington, NJ, in honor of the Guardian Angel of the United States. The statue stands ten feet tall and weighs five tons. It is carved out of carrara marble by a world famous Portuguese sculptor. It was consecrated on July 4th, 1982. - Do individual countries and nations have their own Guardian Angel?

In 1504, by request of King Manuel I of Portugal, Pope Julius II created the feast of the Custodian Angel of the Kingdom (Anjo CustĂłdio do Reino), whose cult would already be ancient in Portugal. The request having been made to Pope Leo X, he authorized the feast, celebrated on the third Sunday of July.[citation needed]

Devotion to the Guardian Angel of Portugal almost disappeared after the 17th century but was restored in 1952, being inserted into the Portuguese Liturgical Calendar by Pius XII.

The angel made his first appearance in the Battle of Ourique, and its devotion gave such a victory to D. Afonso Henriques's forces on the Muslim invaders that gave him the opportunity to self-proclaim himself King of Portugal.

In her Memoirs, the Portuguese Carmelite nun Sister LĂşcia, seer of Our Lady of FĂˇtima, tells that, between April and October, 1916, an angel, identifying himself as the Angel of Portugal (or Angel of Peace) appeared three times to her and to Francisco and Jacinta Marto, in FĂˇtima, Portugal, inviting them to prayer and penitence. One could say that this Angel is none other than Saint Michael himself since the titles used in honour of the Archangel mention him as "The Angel of Peace" and "The Guardian Angel of the Holy Eucharist and the Holy Father". - Guardian Angel of Portugal

The Feast of Angel of Portugal (Memorial) is on June 10 as seen in Wikipedia's General Roman Calendar for Portugal. 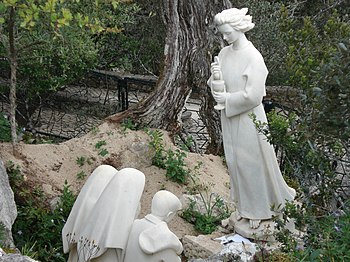 Representation of the Angel of Portugal (or Angel of Peace) in the apparitions to the three children in FĂˇtima.

For those Catholics that adhere to the belief in Guardian Angels, there is no problem in believing that each Catholic Church has it's own Guardian Angel for that community.

We can see by the prayer in the Rite of Asperses in the Extraordinary Rite of the Mass that each church does indeed have an Guardian Angel that looks after the community dwelling there.

Hear us, O holy Lord, almighty Father, everlasting God, and vouchsafe to send Thy holy Angel from heaven, who guards, cherishes, protects, visits and defends all that are assembled in this place: through Christ our Lord. Amen.

This prayer asks God the Almighty Father to send the Holy Angel from Heaven who guards this community! Thus recently constructed Catholic Churches would have a patron saint as well as a Guardian Angel to aid all it's parishioners in all that they do.

Blessed Catherine Emmerich, in her visions also confirms this in the affirmative:

She saw that each parish and diocese, each city and country has its own particular and powerful guardian angel.

At High Mass in pre-Vatican II missals, after the priest has sprinkled the congregation with holy water, the priest prays:

Hear us, O holy Lord, almighty Father, everlasting God, and vouchsafe to send Thy holy Angel from heaven, to guard, cherish, protect, visit and defend all that are assembled in this place: through Christ our Lord. Amen.

This angel is the church's guardian angel.

Not the answer you're looking for? Browse other questions tagged catholicism revelation church-local guardian-angels .