Are the ancient indulgences still valid, those decreed by the previous Popes?

I found in a 1676 old book that indulgences are granted to the people who wear their rosary around the neck, around the wrist or at the belt.

Is it still valid ?

Are the ancient indulgences still valid, those decreed by the previous Popes?

The short answer is possibly but doubtful. Some are valid but not all.

The reason I say possibly but doubtful lies in fact whether the indulgence in question was partial or plenary and were the objects blessed by a priest or not as well as if the particular indulgence was requested to stay in force.

In Pope Paul VI's new rules for indulgences were published in his Indulgentiarum Doctrina he states the following:

These new norms regulating the acquisition of indulgences will become valid three months from the date of publication of this constitution in the Acta Apostolicae Sedis.

Indulgences attached to the use of religious objects which are not mentioned above cease three months after the date of publication of this constitution in the Acta Apostolicae Sedis.

The revisions mentioned in n. 14 and n. 15 must be submitted to the Sacred Apostolic Penitentiary within a year. Two years after the date of this constitution, indulgences which have not been confirmed will become null and void.

We will that these statutes and prescriptions of ours be established now and remain in force for the future notwithstanding, if it is necessary so to state, the constitutions and apostolic directives published by our predecessors or any other prescriptions even if they might be worthy of special mention or should otherwise require partial repeal.

Given at Rome at St. Peter's on January 1, the octave of the Nativity of Our Lord Jesus Christ, 1967, the fourth year of Our Pontificate.

n. 14 — The lists and summaries of indulgences special to religious orders, congregations, societies of those living in community without vows, secular institutes and the pious associations of faithful are to be revised as soon as possible in such a way that plenary indulgences may be acquired only on particular days established by the Holy See acting on the recommendation of the Superior General, or in the case of pious associations, of the local Ordinary.

n. 15 — A plenary indulgence applicable only to the dead can be acquired in all churches and public oratories—and in semipublic oratories by those who have the right to use them — on November 2.

The present list of indulgences can be found in Pope John Paul II's Enchiridion Indulgentiarum of July 16, 1999.

I know that some of those ancient indulgences are still good, but which ones I am unaware of. I will look for a possible list to add to this response.

Some Franciscans still wear their rosaries on their belts. I am guessing that this particular indulgence is still valid. Historically they had a stone in the place of the Crucifix as they thought it was not appropriate to have a crucifix dangling near the ground.

What does the Catholic Church say? Here it becomes less clear-cut:

Pope Innocent XI, 1679: To those who openly wear the rosary out of devotion and to set a good example: a hundred days’ indulgence — confirmed by our Holy Father Pope Innocent XI on 31st July 1679, and received and made public by the Archbishop of Paris on 25th September of the same year.

Canon Law: ‘Sacred objects, set aside for divine worship by dedication or blessing, are to be treated with reverence. They are not to be made over to secular or inappropriate use, even though they may belong to private persons.’

Catholic Answers: Essentially, sacramentals such as rosaries must be treated with respect, particularly if they have been blessed. Reverence is the attitude of awe or respect that is most often given to sacred things. By its very definition, it is an interior disposition that usually cannot be determined by onlookers by appearances alone. A person may be wearing a rosary as a statement of faith, to keep it handy for praying throughout the day, or to avoid losing it. Those reasons would be indicative of reverence and would not interfere with the canon’s directive that sacramentals must be treated reverently.

Obviously, if this indulgence does still exist it would now listed as a partial indulgence.

Seeing the historical nature of wearing a rosary, I would be incline to say that it still exists, but will confirm when possible. Nevertheless the rosary must be blessed by a priest or bishop.

Artistic evidence in the later 1600s suggests that it is in that period that the wearing of the Rosary, now on the belt, finally became a “universal” custom. It is very difficult to trace the introduction of customs, but artistic representations are usually a good indication, and it is in the 1660s and 1670s, that artists first begin to portray Dominican saints wearing a Rosary. A good example from this period is the painting to the right by the Spanish late-Baroque painter Claudio Coello (1642–93), which shows St. Dominic wearing the Fifteen-Decade Dominican Rosary. I do not claim that this is the earliest example of this iconography, only the earliest I have found. If a reader knows of a dated earlier example, I would be happy to add it to this post. 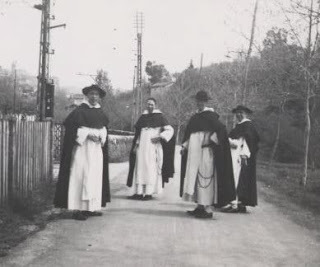 It is interesting that the same artist knew that St. Rose of Lima (1586–1617) would have worn her Rosary around her neck, as that was the practice among Dominicans in Peru during her time. This, even though he has all the rest of her dress incorrect, painting her in the habit of a cloistered nun, rather than in the Tertiary habit she would have worn, with a white veil, no scapular, white tunic, and black mantle. 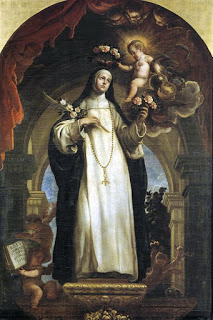 The Dominican Habit and the Holy Rosary

Not the answer you're looking for? Browse other questions tagged catholicism rosary indulgence or ask your own question.

16
Why did Luther curse those who oppose indulgences?
16
What are indulgences and when and why were they used?
1
How do young Catholics remember a set of prayers in order to pray the rosary?
8
Why doesn't the Catholic Church give indulgences to everybody, regardless of their works?
6
Catholic priests in China that reject the papal primacy, are their administration of sacraments considered valid?
6
According to Roman Catholicism, was the 1054 excommunication of the Patriarch of Constantinople valid, in light of Leo IX's death?
4
Were there indulgences sold for those who had no family when they died?
4
How does praying the rosary becomes a spiritual sword that can slay the dragon?
2
According to Catholicism, does Welch’s Grape Juice constitute valid matter for the consecration of the Mass?