Ask Question
Asked 10 years, 4 months ago
Modified 6 years, 7 months ago
Viewed 27k times
17
votes
Closed. This question needs to be more focused. It is not currently accepting answers.
Closed 6 years ago.
Locked. This question and its answers are locked because the question is off-topic but has historical significance. It is not currently accepting new answers or interactions.

As you may know, God is never mentioned in the book of Esther, either by name (Yahweh), title (Adonai), or being (El). Neither is prayer.

Why not? I realize this is rather open ended, so I'll try to give some objective criteria:

I have a few thoughts on this myself, but i'll try to hold them until I can get a good sampling of answers.

(also, why hasn't this been asked yet? Have I missed an obvious duplicate? Or stumbled into the Area51 of ✝.SE?)

This answer by Warren suggests that Esther prefigures Mary, a significant example of faith and virtue.

Embedded in Esther 4:13-16 is the confidence in a sure deliverance by Providence: whether by Esther's house or by some other means, the Jews would be delivered. So while the historical accuracy of Esther is debated here or there, I for one personally love the book because of the inspiring display of virtues, and the profound example of faith by fasting, courage/loyalty, and patriotism.

You have to remember that the Old Testament canon was not set by Christians. but Jews. The RCC Old Testament canon is that of the Septuagint, a Greek translation of the Jewish Holy Scriptures done by Jews in the third century before Christ, and by extension, before the church was even thought of. Back then, the Jewish canon obviously included these extra books we today call the Apocrypha/Deuterocanon. The Protestant canon follows the modern Jewish canon (the one that was established at the caouncil of Yavneh by the rabbis around the end of the first century after Christ). They dropped the deuterocanon, but kept the books that make up the protestant Old Testament.

Anyway, Esther is in the Christian Bible because it is in the Jewish Bible. Why would the Jews include it in their Bible? Chiefly because it tells the story for one of their feasts, that of Purim. Purim is a joyous festival in which they act out the story of Esther by reading through the book of Esther.

I think the primary reason Esther is there is to show the hand of God in preserving the line of His Messiah. Without Esther's intervention the Jews would have been destroyed and the line of the Messiah crushed. So whether God is ever mentioned or not, this book contains a pivotal story in the march toward the coming of Jesus.

In our family we actually don't think too highly of Esther's character. She was willing to disobey God's law by sleeping with the King. Perhaps you could argue that she was forced to come to the King's palace, but that isn't a necessary conclusion from the text. Unlike her predecessors, Daniel, Shadrach, Meshech and Abednego, who abstained from the King of Babylon's delicacies and were rewarded, Esther fully partakes of all the preparations of the Persian harem in preparation for her night with the King.

Despite all that, however, Esther shows God's work in preparing for the coming of the Messiah. Interestingly, it appears John is telling us in John 5 that Jesus celebrated Purim so that is possibly another link between Esther and Christ.

I remembered reading once that God's name appears in Esther in acrostic form. Today I found the link explaining how it works:

I'll leave it to you all to decide if this is just clever hunting on the part of a zealous reader or inspiration within the text.

Now, I'm a little naive because I'm way way way more familiar with the Golden Books version of Esther that I've read to my kids a zillion times. But didn't Esther proclaim a 3 day fast with the intention of saving her people. There's a picture of her praying with her attendants so it just sort of confused me that prayer wasn't obviously an important part of who Esther was (as a person and a book).

15 Then Esther sent this reply to Mordecai: 16 “Go, gather together all the Jews who are in Susa, and fast for me. Do not eat or drink for three days, night or day. I and my attendants will fast as you do. When this is done, I will go to the king, even though it is against the law. And if I perish, I perish.”

Fasting for three days is not to make Esther appear haggard when she approaches the king. Apparently she's even more radiant than ever. She desires something only God can give her, the means at hand are fasting. It's only God who is moved by the fasting.

Maybe I'm echoing the previous, very good answer, but I just thought a few more things could be said about this.

I would say that the Book of Esther does mention God's name, a few times, but they are hidden in acrostics.

Here are the instances: 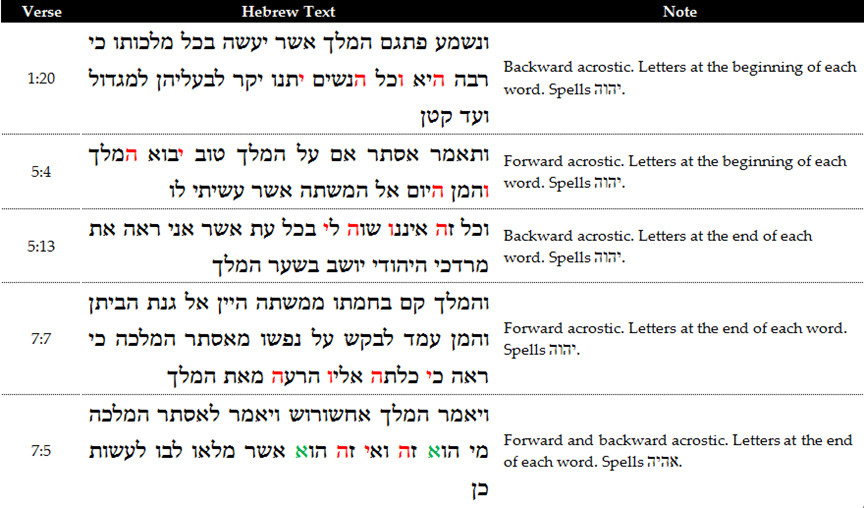 Not the answer you're looking for? Browse other questions tagged exegesis prayer esther .

7
What criteria do Catholics use to determine if an old testament character prefigures Mary?
2
What is Book of Esthers purpose?

9
What isn't spiritual communion?
7
Why was Esther not sinning when she broke the law and approached the king?
13
Why was Jesus afraid/agonizing in the Garden of Gethsemane if the Spirit of God isn't one of fear but of power?
3
Why do Catholics ask for things from an omniscient and omnibenevolent God?
2
Why was the name of St Joseph not mentioned at Luke 2: 19?
6
Why there isn't a daily prayer structure like Liturgy of the Hours among Protestants?