We see the narratives of Temptation(s) of Christ prior to the commencement of His public life, in the Gospels of Matthew, Mark and Luke. Even though the narratives lead one to believe that all the three temptations took place on the same day, the locations of the temptations viz. wilderness, mountain and City Jerusalem would have us believe otherwise--unless of course, both Jesus and the Devil used super-human powers to travel faster than what was normally possible. My question therefore is: Were the three temptations of Jesus spread out on three different days? What do the teachings of Catholic Church tell us on such a prospective ?

The Church has not made any pronouncements in one way or another. Many believe that the Temptations of Christ in the Desert were during the course of his fasting in the wilderness.

However, St. Thomas Aquinas makes allusion that the Temptations of Christ were probably on the same day (last day of Christ's 40 day fast).

It was becoming that Christ should wish to fast before His temptation. First, in order to give us an example. For since we are all in urgent need of strengthening ourselves against temptation, as stated above (Article 1), by fasting before being tempted, He teaches us the need of fasting in order to equip ourselves against temptation. Hence the Apostle (2 Corinthians 6:5-7) reckons "fastings" together with the "armor of justice."

Secondly, in order to show that the devil assails with temptations even those who fast, as likewise those who are given to other good works. And so Christ's temptation took place after His fast, as also after His baptism. Hence since rather Chrysostom says (Hom. xiii super Matth.): "To instruct thee how great a good is fasting, and how it is a most powerful shield against the devil; and that after baptism thou shouldst give thyself up, not to luxury, but to fasting; for this cause Christ fasted, not as needing it Himself, but as teaching us."

Thirdly, because after the fast, hunger followed, which made the devil dare to approach Him, as already stated (Article 1, Reply to Objection 1). Now, when "Our Lord was hungry," says Hilary (Super Matth. iii), "it was not because He was overcome by want of food, but because He abandoned His manhood to its nature. For the devil was to be conquered, not by God, but by the flesh." Wherefore Chrysostom too says: "He proceeded no farther than Moses and Elias, lest His assumption of our flesh might seem incredible." - Question 41. Christ's temptation (The Time)

Further reading can be done in this post: St. Thomas Aquinas On Christ’s Temptation

Then the Devil left Him, and behold, angels came and began to minister to Him. (Matthew 4:11)

Ministered to by angels

At this, Satan departs and Jesus is tended by angels. While both Mark and Matthew mention the angels, Luke does not, and Matthew seems once again here to be making parallels with Elijah, who was fed by ravens. The word ministered or served is often interpreted as the angels feeding Jesus, and traditionally artists have depicted the scene as Jesus being presented with a feast, a detailed description of it even appearing in Paradise Regained. This ending to the temptation narrative may be a common literary device of using a feast scene to emphasize a happy ending, or it may be proof that Jesus never lost his faith in God during the temptations. - Ministered to by angels (Wikipedia)

A traditional Catholic understanding is that the Temptation of Christ was a literal and physical event.

As a Side note:

The Mount of Temptation is said to be the hill in the Judean Desert where Jesus was tempted by the devil (Matthew 4:8). The exact location is unknown and impossible to determine. It is generally identified with Mount Quarantania, Arabic name: Jabal al-Qarantal, a mountain approximately 366 metres (1,201 ft) high, towering from the northwest over the town of Jericho in the West Bank. According to the public domain Catholic Encyclopedia (1907-1914), Quarantania is "a limestone peak on the road from Jerusalem to Jericho". 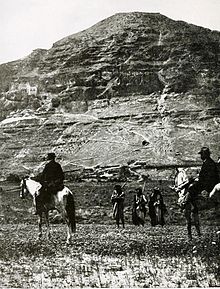 The Mount of Temptation 1910

Not the answer you're looking for? Browse other questions tagged catholicism life-of-jesus gospels temptation or ask your own question.

5
Is there consensus between Christian commentators about how Jesus came to be atop the temple when being tempted by Satan in the wilderness?