What is happening and written in this illustration/artwork?

On this illustration an angel/cherub, two men, some dogs and some sheep.

It is very hard to read what the tekst on what the angel/cherub is carrying.

The tekst says Gloria but the other two words I can't make out.

From an answer in a different post and the book of hours I found out a lot about these illustrations, I only have a hard time figuring this one out.

Can someone help me out? 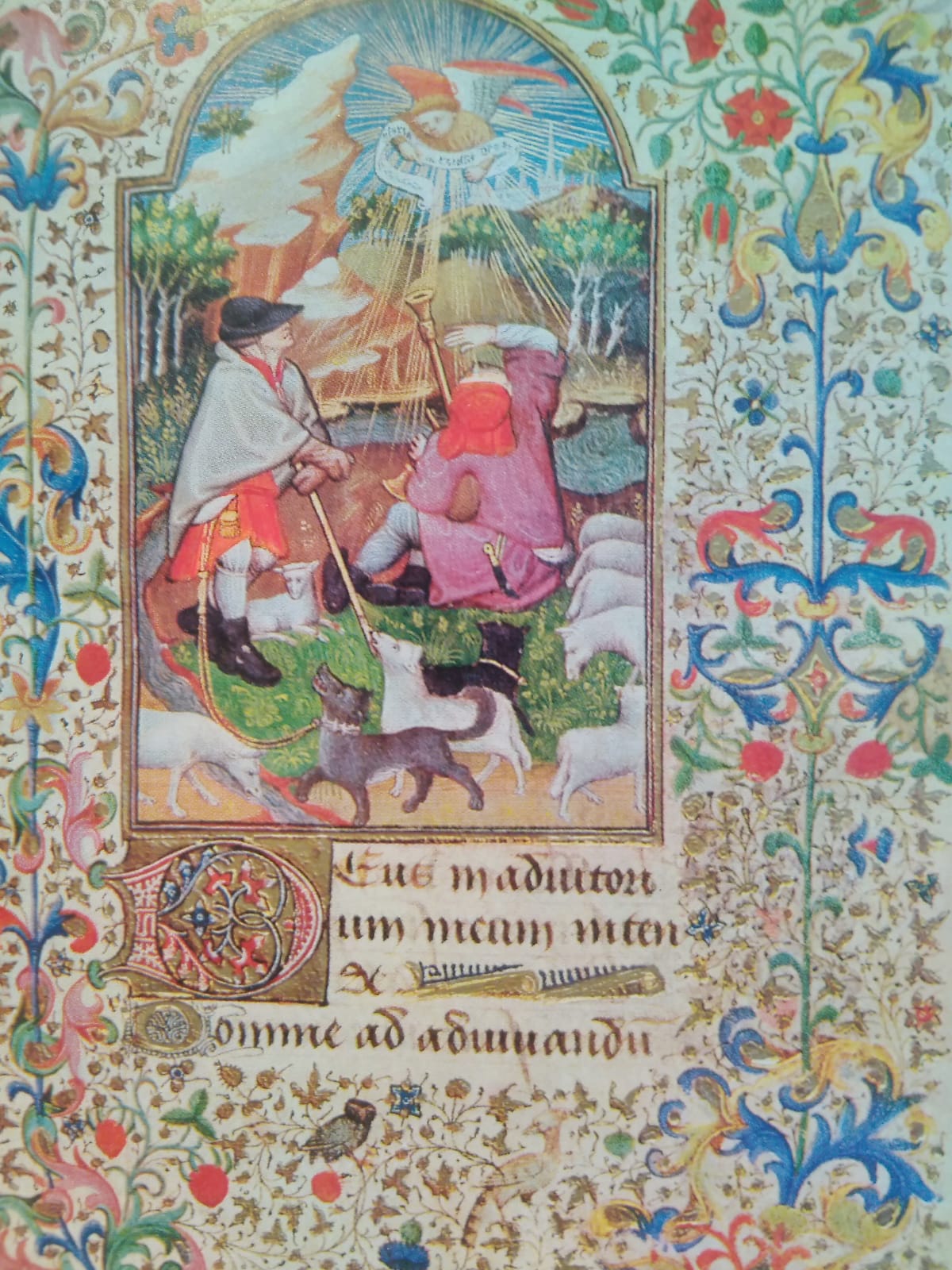 This is a (typical) depiction of the episode recorded in Luke 2, wherein angels herald the Messiah to the hearing of the shepherds.

And [Mary] brought forth her firstborn son, and wrapped him up in swaddling clothes, and laid him in a manger; because there was no room for them in the inn. 8 And there were in the same country shepherds watching, and keeping the night watches over their flock. 9 And behold an angel of the Lord stood by them, and the brightness of God shone round about them; and they feared with a great fear. 10 And the angel said to them: Fear not; for, behold, I bring you good tidings of great joy, that shall be to all the people: 11 For, this day, is born to you a Saviour, who is Christ the Lord, in the city of David. 12 And this shall be a sign unto you. You shall find the infant wrapped in swaddling clothes, and laid in a manger. 13 And suddenly there was with the angel a multitude of the heavenly army, praising God, and saying:

14 Glory to God in the highest; and on earth peace to men of good will.

The scene depicted in the above image is that of the annunciation to the shepherds.

The annunciation to the shepherds is an episode in the Nativity of Jesus described in the Bible in Luke 2, in which angels tell a group of shepherds about the birth of Jesus. It is a common subject of Christian art and of Christmas carols.

As described in verses 8–20 of the second chapter of the Gospel of Luke, shepherds were tending their flocks out in the countryside near Bethlehem, when they were terrified by the appearance of an angel. The angel explains that he has a message of good news for all people, namely that "Today in the town of David a Savior has been born to you; he is the Messiah, the Lord. This will be a sign to you: You will find a baby wrapped in cloths and lying in a manger."

After this, a great many more angels appear, praising God with the words "Glory to God in the highest heaven, and on earth peace to those on whom his favor rests." Deciding to do as the angel had said, the shepherds travel to Bethlehem, and find Mary and Joseph and the infant Jesus lying in the manger, just as they had been told. The adoration of the shepherds follows.

The Angel is holding the script (banner) of what the angels proclaimed to the shepherds:

Glory to God in the highest; and on earth peace to men of good will. (Luke 2:14)

The style of this picture is definitely from about the 15th century, as the image below is also of the same period: 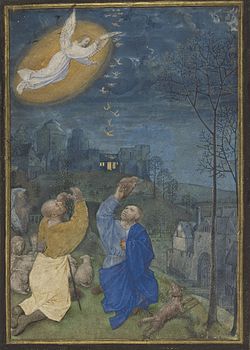 This late 15th-century Flemish miniature shows the annunciation to the shepherds.

The words at the bottom of this image are from Psalm 69 as follows:

These words form the introductory prayer to every Hour of the Roman, Ambrosian, and monastic Breviaries, except Matins and during the last three days of Holy Week, and in the Office of the Dead. While these are recited or sung, all present bless themselves with the sign of the cross.

Tradition says that Benedict of Nursia introduced this custom into the monastic Office, heavily influenced by the writings of Saint John Cassian. Saint Gregory the Great extended it to all the Roman churches. Saint John Cassian (Coll., X, 10) wrote that from the earliest Christian times the monks used this introduction very often, including outside of the liturgical prayers, as an invocation for every situation, for times of temptation, tiredness, and joy. - Deus, in adiutorium meum intende (Wikipedia)

It could be noted that the Gloria is not sung in Catholic Masses during Advent and is to be reserved for the joy of the Christmas Vigil Mass, Christmas Midnight Mass and the Christmas Mass during the Day!.

GIRM 53: The Gloria in excelsis (Glory to God in the highest) is a most ancient and venerable hymn by which the Church, gathered in the Holy Spirit, glorifies and entreats God the Father and the Lamb. The text of this hymn may not be replaced by any other. It is intoned by the Priest or, if appropriate, by a cantor or by the choir; but it is sung either by everyone together, or by the people alternately with the choir, or by the choir alone. If not sung, it is to be recited either by everybody together or by two choirs responding one to the other.

It is sung or said on Sundays outside Advent and Lent, and also on Solemnities and Feasts, and at particular celebrations of a more solemn character.

The artwork in lieu of the artist was trying to depict the coming of the Light into the world and announcing it to the shepherd of the animals. The coming of Jesus Christ born thru the Blessed Virgin Mary signifies the coming of a new shepherd, the Good Shepherd.

The picture depicted that the Light of Christ was blinding the shepherd living in a world of darkness.

While your previous artwork was part of the Mystery of the Holy Rosary, unfortunately this artwork is not part of the Traditional Rosary. But, of course it conveys significant message of Jesus depicted as the Light of God affirming that He comes from God. Light from Light and God from God as the Church declared and teaches it in Apostolic Creed.

To give a contrasting image, if you happen to have the Annunciation artwork too. When the Angel announced to Mary the Divine Plan of God, She can look directly to the Angel considering that Gabriel is no ordinary angel but an archangel, but still the Blessed Virgin Mary was not blinded by the Light coming from the angel. While in this artwork the shepherds were blinded and cannot look directly even at a lower angel.

The appearance of the background depicting a restored world with different animals living together in harmony implied the coming Glory of God that will be the mission of Jesus Christ.

It is also worth to read the Book of Psalm in the passage pertaining to the Good Shepherd.

The Lord Is My Shepherd (A Psalm of David.)

The Lord is my shepherd; I shall not want.

He makes me lie down in green pastures.

He leads me beside still waters.

He restores my soul.

He leads me in paths of righteousness for his name's sake.

Even though I walk through the valley of the shadow of death,I will fear no evil, for you are with me; your rod and your staff,they comfort me.

You prepare a table before me in the presence of my enemies;you anoint my head with oil; my cup overflows.

Surely goodness and mercy shall follow me all the days of my life,and I shall dwell in the house of the Lord forever.

3
What is the name of this painting of Mary and the infant Jesus?
0
What is on the cover of this printing of Ladder of Divine Ascent?
14
What does the abbreviation “RNIO” mean in a painting of the Virgin and Child?
1
What is the origin of the story of the angel Raphael and the boy Tobias?
5
What is the meaning behind this coin of Pope St. John Paul II?
2
What is depicted on this small piece of artwork with Mary and the Apostles?
1
What is depicted on this piece of artwork?
0
Can someone tell more about this artwork of Jesus Christ?