Can someone tell more about this artwork of Jesus Christ?

This is a part of 7 pieces in total.

I am really intrigued by the artwork itself.

Is it possible for someone to identify this scene? 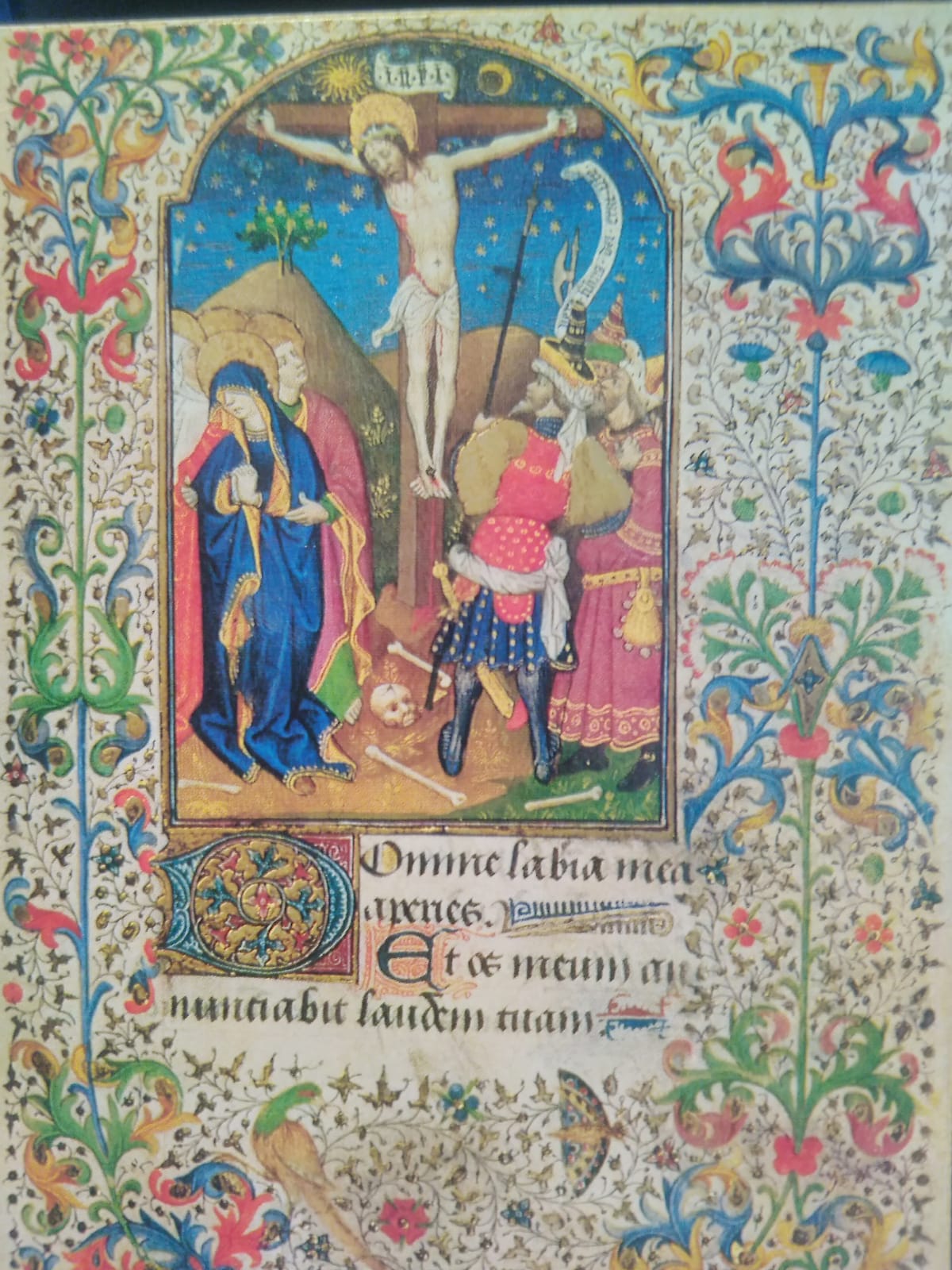 The image depicted is of the Crucifixion of Jesus.

The crucifixion of Jesus occurred in 1st-century Judea, most likely between AD 30 and 33. Jesus' crucifixion is described in the four canonical gospels, referred to in the New Testament epistles, attested to by other ancient sources, and is established as a historical event confirmed by non-Christian sources, although there is no consensus among historians on the exact details.

The Latin words are the opening words of Matins in the Divine Liturgy. The Church praises her redeemer for Christ saving humanity on the Cross.

R: And my mouth shall declare thy praise.

The art depicted the Fifth Sorrowful Mystery. "The Crucifixion and death of our Lord Jesus Christ"

To give you a nice reflection on this, this image was the very first image that was hidden in the very first verse in the bible, the word "In the beginning". Translated in Hebrew language this word becomes "Bereshit".

This is the Divine Plan for the Salvation of Mankind, it's called the "Way of the Cross".

This is also the meaning of the name of God in Hebrew YHWH.

Let us connect this hidden mystery.

The image depicted Jesus offering His life to redeemed all mankind. His most precious blood merit the graces needed to wash away the original sin and freed us from the slavery of Satan and healed our wounded nature.

"He who sins is of the devil, for the devil has sinned from the beginning. For this purpose the Son of God was manifested, that He might destroy the works of the devil." (1John3:8)

But He was wounded for our transgressions, He was bruised for our iniquities; The chastisement for our peace was upon Him, And by His stripes we are healed. (Isaiah53:55)

The mystery behind this image is, before God created mankind and before the fall of Adam & Eve,God already knew it. And so, God already had conceived the Divine Plan for the Salvation of Mankind even before Adam & Eve fall. 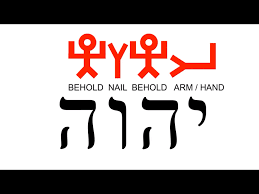 Plus if we take into the meaning of the first verse in the bible Genesis1:1 the Hebrew word "Bereshit" means "The Son of the Almighty God offered his life freely on the Cross"

So, the image of the Fifth Sorrowful Mystery the Crucifixion & Death of Jesus Christ is the very image shown to Sis. Lucia requesting prayer & penance in June 1929. 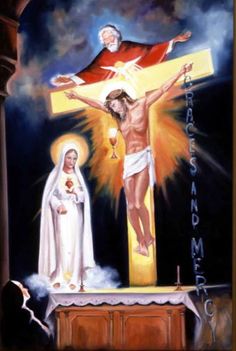 Note : The picture on the artwork also depicted the same royal robe of Mary. Both Mary and St.John depicted holiness in their faces. With the addition of the other Mary on their back also have a halo and robe with white garment depicting the holiness & piousness of this other Mary.The centurion is included in the scene as the Blood & Water that flowed from the side of Jesus coming from His Sacred Heart is the First Miracle that healed the blindness of the centurion that led to his conversion. The other centurion will serve as a living witness to the miracle. The symbol of Sun and Cresent Moon was on top of the Cross, the Tradition point this symbol to Jesus and Mary. The Latin word on the white ribbon is hard to visualize but the Latin word at the bottom is Domine, labia mea aperies, et os meum annuntiabit laudem tuam.

V: Thou O Lord wilt open my lips. R: And my mouth shall declare thy praise.